The Crippled God by Steven Erikson
My rating: 5 of 5 stars

Epic, masterful, and scintillating in every sense of these words; The Crippled God is an unforgettable magnum opus that concludes Steven Erikson’s genre-defining series: Malazan Book of the Fallen.

11,216 pages (Bantam paperback edition) and 3.3 million words read in exactly two months and two weeks; I’m done, it’s finally over. The entire ten-volume of Malazan Book of the Fallen has been in my TBR pile for almost two years long, and now it has been read, dusted and shelved. Erikson has raised the benchmark for Epic/military fantasy ridiculously high with what he created in this series. Together with Wrath by John Gwynne and Assassin’s Fate by Robin Hobb, The Crippled God stands among the top of the best final book of a series I’ve ever read, and there’s a definite probability that it will always stay on that list.

“I have enjoyed our long conversation. What’s three and a half million words between friends?” – Steven Erikson

Where do I even begin? Is it even possible for anyone to write a review that can give the series the justice it deserves? I know I can’t. Alas, a review must be written; I’ll try to keep it as short as possible. Having slept on it and waking up thinking about it, I’ve come to realize that I probably will never encounter another fantasy series as complex and massive in scope like this series. Erikson’s achievement in writing Malazan Book of the Fallen and completing the massive series in the span of twelve years deserves a standing ovation from the entire SFF community. Accompanying demonic ambition, writing speed, dedication, and hard work, Erikson has created a series brimming with stellar content that can last a lifetime; I can already envision that rereading the series will be immensely rewarding.

Excluding the close to pointless Snake plotline, I thoroughly enjoyed reading every single page of this book. The build-up, the characters’ development, the world-building, and the themes that ran throughout the entire series came to an explosive denouement. The refrains of sacrifice, an orchestra of bittersweet poignancy, impactful themes of faith, despair, redemption, regret, compassion, loyalty, honor, resilience, and friendship; all of these collaborate to give the unwitnessed heroic deeds the proper respect they rightfully deserved.

There were a myriad thought-provoking, inspiring, and resonating philosophical discussions implemented into the story line; combined with the stunningly written act of devastations brought in this last installment, suffice to say that I was repeatedly astonished by Erikson’s tremendous capability as an author. The last two chapters (which lasted approximately 300 pages and took me four hours to read) of The Crippled God were extremely well-written, keeping me on the edge of my seat, and pretty much summed up the best kind of experience that epic fantasy has to offer. Blistering battles for dominance, swirling grief, brutal annihilation, and inescapable casualties from all factions; firestorm, thunderstorm, maelstrom, and many more large-scale action sequences create an exhilarating and emotional cinematic experience. Plus, the accumulation of the tension, build-up, and information that has been established, either explicitly or subtly, throughout the series right from the first installment culminated to bring the most groundbreaking convergence of epic proportions into the last two chapters; it was easily the best climactic sequences of the series and that’s saying a lot.

To choose one or five favorite characters from the series is as difficult as being asked to choose which favorite series you’ll burn. Usually, there are less than ten memorable characters within a single trilogy. For example, if I ask who your favorite characters from Mistborn trilogy are, the answers are almost guaranteed to be Kelsier, Kelsier, Kelsier, Kelsier, Kelsier, and Vin; this won’t happen with this series. There are an incredibly high amount of memorable and pivotal characters that being asked to choose only five favorite characters will be such an unfair task. Characterizations have always been the most important aspect in every single book I read. The series has the biggest cast of characters I’ve ever read by far. I’m not joking, there were more than 300 characters throughout the series to keep track of, the dramatis personae in this final installment alone have 212 characters in it. I won’t lie, the characterizations in the second half of the series suffer a lot in my opinion. Erikson introduced new characters mercilessly and the majority of them sounded the same to me. This was especially true in Reaper’s Gale and Dust of Dreams. Fortunately, Erikson didn’t do this in The Crippled God. Only a few new characters were introduced and they were all fantastic to read. By focusing the storytelling and narrative on characters we’re familiar with, regardless of their quantity, made the characters dynamics, interactions, and dialogues an absolute delight to read.

I don’t have anything left to say regarding the installment, or the series itself except that Erikson’s world-building was unparalleled. In this blazing colossal conclusion, Erikson unleashed all the races throughout the series. The humans, the gods, the ascendants, K’Chain Chemalle, Forkrul Assail, T’lan Imass, Barghast, Tiste Andii, Tiste Liosan, Tiste Edur, Eleint, practically every kind of factions converged. I have never read a series as massive as this one. Every place, buildings, weapons, characters, and locations – all have their own history. Erikson could seriously write about anything in this world and it would still work. That’s how massive and intricate this series is. Right now, the only thing that in my opinion can be compared to Erikson’s world-building skill is Sanderson’s Cosmere universe, but that’s totally different as Sanderson’s Cosmere spans across worlds and many series instead of taking place in a single world as Malazan did.

My advice if you’re new to the series: patience and commitment. Look, there’s no way around it, it doesn’t matter how much you love the series, I guarantee you that these two are necessary. This is especially true in the second half of the series where the scope of the story grew more complex, massive, and difficult than the first half. From my experience, I simply can’t take a break from the series too long otherwise I risk forgetting even more details than I already did; many readers said I finished this series very quickly, I took a one week break twice and even then, I forgot some details already. It’s also impossible to gauge whether you’ll like the series or not just from the first book. My recommendation is this. Give the series a go until Memories of Ice. If upon finishing Memories of Ice you feel the series was just okay, or not suitable to your reading preference, continuing the series from there on will most likely be futile. Memories of Ice is considered by a lot of the fans to be one of the, if not the best installment of the series. However, if you find that you’re blown away already by Gardens of the Moon, you’ll probably experience an escapism fantasy unlike any other.

Picture: The Complete Malazan Book of the Fallen. Cover art by Kekai Kotaki. 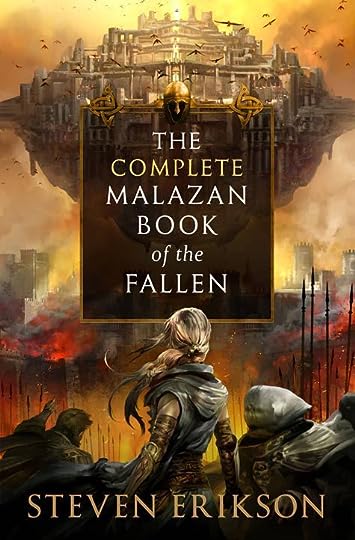 I didn’t find Malazan Book of the Fallen as flawless as what the rabid fans claimed to be. However, despite some issues I had with it, I rank the series as a whole to be my current number one favorite series of all time together with The Faithful and the Fallen by John Gwynne and The Stormlight Archive by Brandon Sanderson; don’t make me choose which one I love more, they’re different from each other and each have their own strengths. Brilliantly complex and extremely rewarding in all its might, Malazan Book of the Fallen is a transcending and triumphant genre-defining series, and if you’re an epic fantasy fans, you owe it to yourself to give the series a try. I, as a reader, am genuinely gratified to have read the everlasting adventures penned in Malazan Book of the Fallen. The series and many other incredible series have cemented the fact that epic fantasy, or just fantasy in general, will always be my favorite genre and escapism read.

“And now the page before us blurs.
An age is done. The book must close.
We are abandoned to history.
Raise high one more time the tattered standard
Of the Fallen. See through the drifting smoke
To the dark stains upon the fabric.
This is the blood of our lives, this is the
Payment of our deeds, all soon to be
Forgotten.
We were never what people could be.
We were only what we were.

Joining many other witnessed and unwitnessed readers, I have unchained the Book of Fallen. It’s your turn to carve the tales of the Fallen into your memory and remember them.

Side note:
Special thanks to my friends, TS and Emma, who listened to my all my theories and ramblings (for better or worse) about the series without giving spoilers or being judgmental. Lastly, I know some of you have asked about the proposal I mentioned in my Gardens of the Moon review. The answer is yes! It won’t be soon, I still have some things to prepare but fingers crossed it will happen next year. For now, let’s just say for now that the stoppage light has turned green by completing this series. Wish us the best of luck! 🙂