By this point of the series, I think it’s safe to say now that Malazan Book of the Fallen will never break my heart the way it did a lot of readers. People always told me that Erikson was more brutal towards his characters more than George R. R. Martin or all the conclusion of his books will leave my soul crushed; I strongly disagree with these as I found none of the books in the series so far to ever move me to the point of making my soul crushed or on the brink of tears. This series is amazing in many other aspects but for characterizations (which is the most important aspect of any story for me), in my opinion there are several authors who did it better.

Before you raise your pitchfork, let me emphasize that the reason behind this comes down to the simple fact that Erikson spread out his characterizations to way too many characters, and for what it’s worth, what he did with more than hundreds of characters were incredible. However, because there were too many characters POV, I was never invested in the majority of the characters as much as I did with some of my beloved series that has a normal amount (let’s say one until more or less thirty POV throughout the series) of characters to follow. I was super happy with what Erikson did in The Bonehunters; he introduced a relatively few new characters (many awesome ones at that too) and we get to follow mostly characters that we’re familiar with. In here though? The drammatis personae shot up to at least 150 characters and we’re forced to read so many completely uninteresting new characters POV; more info on this later.

Reaper’s Gale, the seventh book in the Malazan Book of the Fallen series brings the plot back to Letherii, the location where the story of Midnight Tides (one of my favorite books in the series) took place in. I won’t be talking about the plot at all, this is the seventh book already. My introductory paragraph and my rating should give you an indication that I have mixed feelings about this installment. Trust me that I honestly wish I could give this book 5 stars but doing that would be a lie. Here’s the thing, Reaper’s Gale provided me some scenes that could be included into one of the best scenes from the series, but unfortunately it also provided me with some of the worst and boring experience in the series.

The first 40% (twelve chapters) of the book were quite a mess for me to read. Erikson focused the story on mostly new characters I simply don’t care about. This is the seventh book already for god sake, and after reading the book, some of the new characters felt almost as if they were there just for the sake of making this book longer or unnecessarily more complex than it should be. Usually, I don’t mind Erikson introducing new characters, that’s what he always did with each installment. However, Erikson was capable of giving distinct voices to his characters and that very important ability was lost to me in this installment. Most of the new characters sounded almost completely the same and their POV became uninteresting to read. One of the newest character, Redmask, was one of the most disappointing character storylines within the series so far. I genuinely laughed because the conclusion of his story was so damn ridiculous, unsatisfying, and pointless; it made me think “what was the point of me reading his story? This could’ve been almost entirely skipped and my experience reading this book will most likely get better.”

Although Redmask was one of the worst and—for now—pointless characters in the series so far, Erikson also included one new side character that I consider one of the best character Erikson ever wrote; his name is Beak. Let me get this straight, Beak didn’t get a lot of POV for us to read but just with a few POV chapters, Erikson managed to make sure his characteristics, background, motivation, ability, were all fleshed out. His characterization was so damn incredible that even simple line like this passage down below holds a tremendous amount of impact.

“Yes sir. You’ll see. Everyone will because you’re all my friends and friends are important. The most important thing in the world. And I’ll show you.”

I’ll be honest, the book was barely a 3 stars read for me until the last 20% of the book happened. Although the road to get to the last 20% was full of up and down for me, it still felt rewarding to reach the climax sequences because the last three chapters of the book offer some scenes that would definitely be considered as some of the most memorable scenes within the series. Friendship, loyalty, destruction, flashes of light, bloody duels, and sorcery conflagration shine in the last 20%. The climax sequences of the book were executed magnificently and all the manipulation, scheming, and politics within Letheras was still as good as ever; I just wish there would be more of them just like how it was in Midnight Tides.

Picture: One of the interior artworks in the Subterranean edition by Tommy Arnold 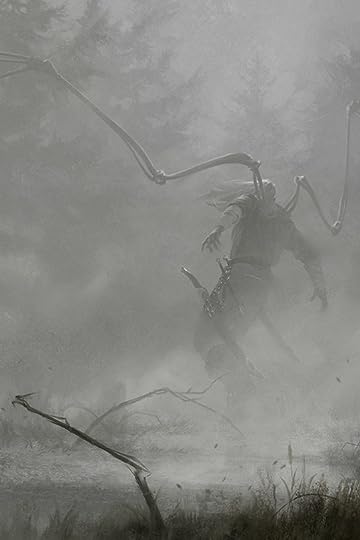 The last great things about this book that I can say without spoilers would be the return of my favorite duo, and of course getting to see the continuation to the Emperor of a Thousand Deaths plotline. Lastly, as always, every time the story put me in the POV of familiar characters from the previous installments, I became completely enthralled and immersed in the story.

“Why, without a sense of humour, you are blind to so much in the world. To human nature. To the absurdity of so much that we say and do.”

Despite a lot of setbacks within this installment and my personal opinion that this is currently the second weakest book of the series so far, Reaper’s Gale was still overall a great book. There’s probably no chance that the series will follow characters we’re familiar with in the last three books of the series, but I’m still hopeful that Erikson will somehow get the story back on the track of greatness like he did with the third, fifth, and sixth installment of the series.

One thought on “Reaper’s Gale (Malazan Book of the Fallen, #7)”