Midnight Tides by Steven Erikson
My rating: 5 of 5 stars

After the huge disappointment I had with House of Chains, Midnight Tides brought my love for Malazan Book of the Fallen back magnificently.

Midnight Tides marks the fifth book in the Malazan Book of the Fallen series. That’s right, this means that I’m halfway through the series now! Knowing that this is the fifth book in the series, it surprised me at first that instead of continuing the story from everything that has been built in the previous four books, the narrative shifted its focus back to several years before the time in Gardens of the Moon; in a completely new continent with a new conflict and shockingly—with the exception of one character from House of Chains—a completely new set of characters. I mean, this is the fifth book of the series already! Isn’t it crazy that we don’t get to see the majority of the previous four book characters in it? Well, it IS crazy but please don’t be intimidated by this fact. 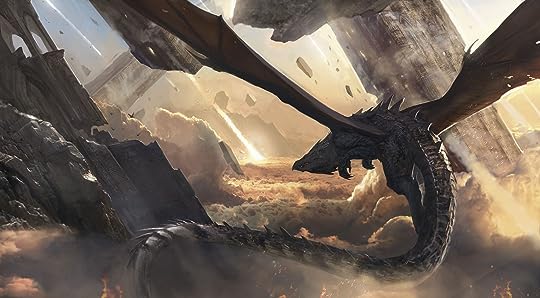 The story in Midnight Tides revolved around the conflict between the Tiste Edur race and the Letherii Empire. The Tiste Edur has appeared several times throughout the series but it has never been explored in depth until now. Let me say that I absolutely loved the themes surrounding this installment. Starting from the masterful prologue, Erikson style, I was pleasantly surprised by how the story developed. It took me a bit of time to get used to the new characters, settings, and story, but once the book hit chapter nine, I was hooked and addicted to reading this book. Never have I read a fantasy book that correlates the problems around the social structure in the work with our modern society and politics as well as Erikson did in this book. This was achievable because of the Letherii culture and lifestyle that put wealth and the lust for gold above every priority. I absolutely love reading the themes and social commentaries in this book. Betrayal, greed, avarice, and how deep the corruption money or power can bring; it felt like looking at a reflection of the dark truth in our modern lifestyle in which our ‘greatness’ as a human being is heavily determined by our money and social status.

“To the Letherii, gold was all that mattered. Gold and its possession defined their entire world. Power, status, self-worth, and respect – all were commodities that could be purchased by coin. Indeed, debt bound the entire kingdom. Defining every relationship, the motivation casting the shadow of every act, every decision.”

Great story and themes aside, Erikson also amazed me with his characterizations in this book. Although the book comprised of mostly new characters for the series, it was filled with some of the most well-written character developments within an installment of the series so far. This was evident for one pivotal character whose name I won’t mention and of course, my new beloved and highly entertaining duo, Tehol and Bugg. I’m not kidding, Tehol and Bugg currently sit at my top-tier level of the favorite duo of all time. Their interaction, their relationship, was utterly hilarious and their dynamic banter combined with Ublala Pung makes for one heck of a hilarious entertainment. There was one chapter surrounding these characters where I practically just laugh for the entirety of the chapter. Trust me that this is something incredibly rare for me in reading epic fantasy; I usually just smirk or smile, not laughing.

One more thing to note is how stunning Erikson’s prose can be in this book. With commentaries and self-contemplation on social structure, wealth, politics, greed, and betrayals that made almost the entirety of this book quotable, Erikson also accompanied this book with phenomenal action sequences and tactics that made the book totally belong in the military epic fantasy genre. I’ll be honest, I’m not a fan of Erikson’s close quarter combat scenes; I’ve read plenty of authors who did a better job at it. However, with blood that rain upon the land, a staggering tower of bodies, and the massively catastrophic result of blind loyalty, poor leadership, and war; it’s his way of depicting the deadly power of the sorcerer’s magic capability within his series that made him really stood out from the majority of fantasy writers.

The only con I had on the book was the abundance of dream sequences in Udinaas’s POV that was fired in rapid succession within the first quarter of the book. However, like I said before, once the book reached chapter nine, the book was an addictively smooth reading experience through and through.

“For from inequity derives the concept of value, whether measured by money or the countless other means of gauging human worth. Simply put, there resides in all of us the unchallenged belief that the poor and the starving are in some way deserving of their fate. In other words, there will always be poor people. A truism to grant structure to the continual task of comparison, the establishment through observation of not our mutual similarities, but our essential differences.”

After the disappointment I had with the previous book, this installment easily reclaimed my love for the series with its continuous maelstrom of emotions. Midnight Tides was another amazing installment for the series that truthfully has become my second favorite book within the series so far, just slightly below Memories of Ice. Only five books left now, The Bonehunters is coming up next and you can bet that I’m very much looking forward to reading it soon.

One thought on “Midnight Tides (Malazan Book of the Fallen, #5)”