The Bone Ships by by R.J. Barker

RJ Barker wrote one of my favourite fantasy series of all time, The Wounded Kingdom trilogy. So, when I heard that he was writing a brand-new series called The Tide Child trilogy, I was excited. And by excited, I mean I might have shouted about it to one or two, or seventy random people. I am a huge fan. That said, on my first read I struggled with the start of this book and that influenced my initial rating quite a bit. I still thought this was a very good book in the end, but felt it took slightly long to get there. On rereading this though, I was pleasantly surprised by having an absolute blast of a time and I am happy to say that I misjudged this book a bit. 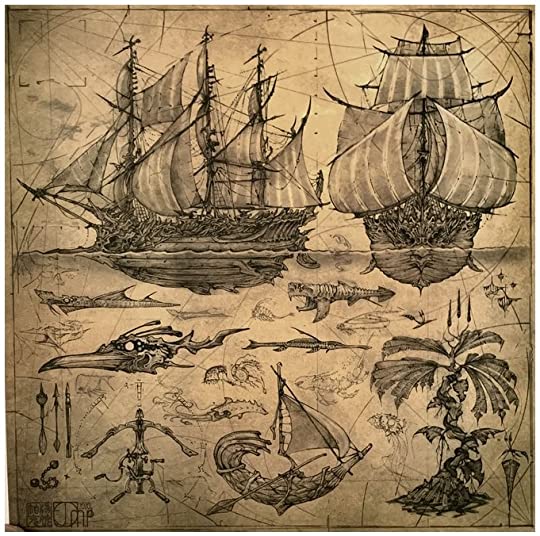 The story of The Bone Ships sets sail in a world where two seafaring nations are engaged in a never ending fight in what has almost become a war of attrition. The ships they sail the dangerous oceans upon are made from the ancient bones of sea dragons, but the last sea dragon was killed centuries ago, and their bones have become a very limited, priceless resource. When a whisper of a rumour is heard that a sea dragon has been sighted, the race to secure the future is on. In the war’s greatest battle, whoever kills the dragon, will have the prize of it’s bones and the mantle of victor. The two main characters of The Bone Ships, Lucky Meas Gilbryn and Joron Twiner, both recently condemned to a ship of the dead, or Black Ship, have been given the deadly task of capturing the sea dragon or arakeesian as they are commonly known. As truths became forgotten and legends turned to myth, much of what was known about sea dragons, including the methods of their capture has been lost to time though and they have to use every resource available to them in order to have even a minuscule chance at succeeding.

“We are a ship of the dead. Sentence has been given: we only wait for it to be carried out.”

As I mentioned, on my first read I felt that the start was very slow and even at times confusing, which was wholly unexpected, but feels much more intentional now. RJ Barker has proven before that he can grip you right from the first sentence with an engrossing story and compelling characters. It is something he demonstrated again and again with every entry in the Wounded Kingdom trilogy, and he won many fans for it. With my original read of The Bone Ships, I found myself continuously picking this up, only to put it down again a few pages later. The characters did not pique my interest and the plot meandered. I felt lost in this slow read, but I did not give up, because RJ Barker. Lo and behold, the tides of change did arrive at around the halfway mark and brought with it everything I initially expected, delivering a book-saving second half and enticing me back for more.

But that was then, and this is now. So, I set out on this reread, honestly expecting that it might once more be a slog to get through the start, but I cannot recall at this moment a book which felt so different to me at second glance. I was unequivocally invested in the story and the characters right from the very first page. Imagine my surprise when the issues I had before faded away like mist in the sun, and what was once jarring to me became captivating and immersive writing that merely reinforced the strangeness of this fascinating new world..

Oh how the tides turn! Where before I had to put this one down continuously, I was reading multiple books this time but kept on catching myself putting <i>those</i> stories down to instead pick this one up again. Did I say the story meandered before? EXCUSE ME, it’s RIVETING and I was dragged along in the book’s relentless current. And that was all before I reached the second half of the book that was in fact the highlight of my first read. That great hunt I mentioned earlier? It rears its head here at this midway point, and becomes the catalyst that takes the story of The Bone Ships to the next level and made me keep on reading just one more page. And just one more. And just one more. 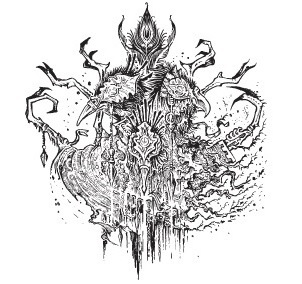 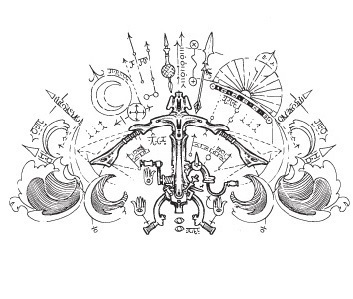 Previously I thought the significant amount of early worldbuilding hindered the ebb and flow of the tale, even though it became a boon in the latter part, having already laid a solid foundation for everything else to expand upon. This time around it was an absolute marvel. Barker’s creation of this world and it’s landscape, the gender roles, customs, traditions, inhabitants and creatures, fauna and flora and much much more is a breath of fresh air. I can’t wait to read more! And while most of the story’s time was spent voyaging on the sea in pursuit of the Arakeesian, (traveling can be oh so dangerous in a fantasy story) the chase was not without adventure, gripping character clashes, skirmishes, very intense ship battles and fascinating naval tactics. I was at times reminded of scenes I had seen in the movie, Master and Commander, and I was not surprised to learn later on that the story is also kind of a love letter to authors like Patrick O’ Brian, creator of the book that that movie was based upon.

As the pace sped up in tune with the pursuit, the characterization refused to take a backseat to the action. Joron, Meas, the Gullaime and the rest of the crew – I absolutely loved reading about them all and immensely enjoyed the growth exhibited by so many of them, but especially Joron. Joron starts off as a nothing, a nobody, broken, lost and hopeless. But that is the beauty of it. We get to follow him on this journey as he becomes more, a journey fraught with pitfalls and tests, but one in which he never gives up, facing lots of grief and his own mortality while still learning so much along the way, in particular about himself. For me one of the biggest themes in the story is also one that I am a huge fan of, redemption, and no-one currently embodies it more than Joron, although it is a journey shared by all of the crew. Most of them are broken in one way or another, just trying to find their way whilst surviving in this harsh world, and we get to go along for the fascinating ride. 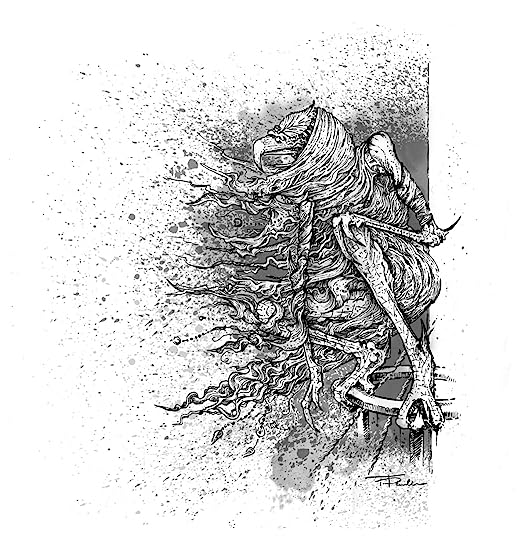 The Bone Ships is both a wonderful and promising start to this excitingly original series that RJ Barker has imagined. If, like me, you find yourself struggling upon reading this the first time, I would advise you to hang in there. The story does take it’s time in establishing the world and the characters, but it’s very deliberate on the author’s part and the payoff is clear once you have finished the book. Even more so on a reread. Be patient in getting to know the characters in this story; the broken people, the lost people, the people in need of redemption. They are very much still in the process of discovering who their family is and who they themselves are. And they are all very much on the adventure of a lifetime, sailing into history as they chase the last sea-dragon across vast and merciless seas, against impossible odds and implacable enemies.

“So remember this, if you hear tales of bravery and greatness, they are nearly always told by people who have only watched battle from afar. Those of us who have suffered through it know such stories as a skin over the horror of what is true.”

You can order the book from: Amazon UK | Amazon US |  Book Depository (Free Shipping) | Blackwells