This review was written the 2nd of July 2017

Arm of the Sphinx by Josiah Bancroft

Raven’s Shadow by Anthony Ryan, The Riyria Revelations by Michael J. Sullivan, and now, The Books of Babel by Josiah Bancroft; I’ll be surprised if this series doesn’t end up becoming the next successful self-published to traditionally published fantasy transition.

Arm of the Sphinx is the second book in The Books of Babel series by Josiah Bancroft. The story continues months after the end of the previous book. Each chapter still begins with memorable and philosophical quotes such as:

“We are, each of us, a multitude. I am not the man I was this morning, nor the man of yesterday. I am a throng of myself queued through time. We are, gentle reader, each a crowd within a crowd.”

This second novel is heavily focused on the character’s development and relationship, and I am so impressed by it. Senlin’s crew and their friendship were easily the main highlights of Arm of the Sphinx for me. I don’t think the main plot itself progressed a lot here, but that’s okay; the interactions between Senlin and his crew proceeded gradually, and they felt so believable. I enjoyed this immensely; Bancroft’s decision to widen the usage of the narrative into multiple POVs felt right.

I also think that the amount of mystery and setup established in Arm of the Sphinx was so superb. Part III—and beyond—of the book was so unbelievably compelling that I finished reading the last half in two sittings. It’s clear that there were plenty of unresolved things, but I personally think that Bancroft managed to make this installment exciting while also making it work as a bridge for the next book. 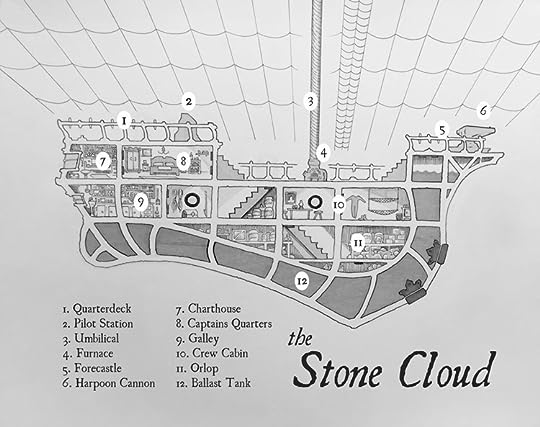 I loved the bigger shift into the steampunk fantasy subgenre; it made the series even more fascinating than before. Skyship and sky pirates are now more dominant in the narrative. And also, the world-building was written with enough intricacy without it being distracting to the pacing. Lastly, Bancroft’s prose continues to shine. I loved reading the philosophical inclusion in the book; they felt enchanting, and I’m glued to the page completely.

“The essential lesson of the zoetrope is this: movement, indeed all progress, even the passage of time, is an illusion. Life is the repetition of stillness.”

The Hod King need to come sooner. There are so many mysteries and things that need to be resolved, and if Bancroft managed to pull it off, this will become a quartet to remember in the genre. Arm of the Sphinx, while slightly inferior in comparison to Senlin Ascends, was still an incredible book. I do believe that Orbit Books has landed a hidden gem here. In the years to come, I’m sure this series will launch itself into bigger success and popularity. The Books of Babel is so distinctive in the fantasy genre, and I highly recommend this series to anyone who loves steampunk fantasy with great characterizations, beautiful plus philosophical prose, and fascinating world-building.