A great fantasy standalone that will make you know how it feels to live for five days in a fantasy world.

This is the first time I read Janny Wurts’s solo work; prior to this, I’ve read The Riftwar: Empire trilogy that Wurts co-write with Raymond E. Feist within this year. The Riftwar: Empire trilogy, to me, has become one of my favorite trilogies; I am stunned that it took me this long to finally get around to reading that trilogy. Janny Wurts is often well known for her work on Riftwar: Empire trilogy and her magnum opus: Wars of Light and Shadow. I’m fully intended to read her magnum opus but before I get around to reading Wars of Light and Shadow, I thought it might be better for me to read her standalone novel first. The reason behind this is that many fans of her works have mentioned that it’s better to read To Ride Hell’s Chasm first to get an idea of Wurts’s prose, which is significantly more difficult than the one in The Riftwar: Empire trilogy, and they’re not wrong on this. I will talk about this more in the review below.

“It’s tragic how the lack of imagination so often shapes our defeat.”

When Princess Anja fails to appear at her betrothal banquet, the tiny, peaceful kingdom of Sessalie is plunged into intrigue. Two warriors are charged with recovering the distraught king’s beloved daughter. Taskin, Commander of the Royal Guard, whose icy competence and impressive life-term as the Crown’s right-hand man command the kingdom’s deep-seated respect; and Mykkael, the rough-hewn newcomer who has won the post of Captain of the Garrison – a scarred veteran with a deadly record of field warfare, whose ‘interesting’ background and foreign breeding are held in contempt by court society. Mykkael’s investigations are the main plot of the novel, and on its own, that’s a simple premise that may not sound captivating enough. There’s more to this novel. One of the things that made To Ride Hell’s Chasm more intriguing to me, as I said earlier, is that the entire story takes place within five days. Other than The Heroes by Joe Abercrombie, I haven’t read many fantasy novels that encompassed this relatively short time in a single book. By doing this, it really felt like no scenes were ever skipped here. Readers get to FULLY witness this adventure about responsibility, duty, death, magic, and mercy.

“I am the weapon a king has taken to hand, yet am not his to possess. My power to act in his name is not his. I know this. He may not. Or he might forget, at his peril. Therefore, the gift of my oath to serve enacts the potential for dangerous consequence. If I misuse his majesty’s trust, the earned debt is entirely mine. If he misdirects me, there could be a dreadful cost. The balance becomes mine to guard, do you see? I choose when to strike or when to stand upon mercy.”

The characters in To Ride Hell’s Chasm were well-written. Mykkael, Taskin, Vesnic, Jussoud, and many other characters here felt well-realized. I think that’s an incredible feat considering that Wurts has spent a relatively small number of pages on the character’s background, but they were certainly enough. The tension in the story constantly escalated, and sometimes seemingly simple things could disrupt Mykkael’s investigations critically. Blind prejudice is one of the key themes explored in the novel; Mykkael’s investigations are constantly halted and disturbed by people’s stupidity and racism towards him due to the color of his skin. It can get infuriating to read, and I think it’s meant to be that way. The stupidity and awfulness of these people felt so real and believable to me. And I loved seeing how Mykkael, despite his strength and skill in battle, continuously wants to be merciful as best as he can.

“Death has no repeal. It is a brute ending that leaves us the legacy of an inscrutable silence. Therefore, I understand the voice of mercy very well.”

I do, however, have to give some advice before reading To Ride Hell’s Chasm, and quite likely Wars of Light and Shadow even if I haven’t read it. Janny Wurts’s prose is beautiful, and every word felt like they’re intentionally and carefully chosen. But it will take some time getting used to it, and it’s definitely far from being accessible, in my opinion. Wurts’s works, especially Wars of Light and Shadow, have frequently been compared to Malazan Book of the Fallen by Steven Erikson. Just from reading this standalone novel, I can already see why. The prose is heavy, dense, and packed with a lot of information. This isn’t a bad thing, but in a similar way to Malazan Book of the Fallen, reading the novel felt slower than usual, and I assume this will be even more evident in reading Wars of Light and Shadow. It honestly took me about 150 pages before I felt like I’m used to the prose. There’s just so much world-building integrated into To Ride Hell’s Chasm that it could’ve worked as a duology or even a trilogy. I knew about all of these before I started this book, and I’m grateful. I doubt I would be able to enjoy To Ride Hell’s Chasm if I didn’t come prepared with the right expectation. 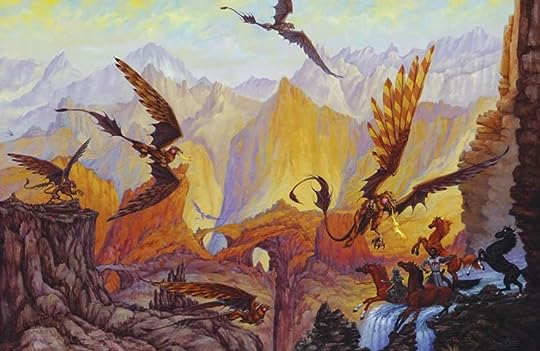 To Ride Hell’s Chasm is an immersive epic fantasy standalone filled with intrigue, magic, and actions. I did feel that one more chapter about the people of Sessalie at the end would’ve made the ending more satisfying, but as a good one-off standalone novel, this is totally worth a try. Lastly, I think it’s pretty cool that Janny Wurts did the cover art and maps for To Ride Hell’s Chasm herself. I look forward to attempting Wars of Light and Shadow in 2022.

One thought on “Book Review: To Ride Hell’s Chasm by Janny Wurts”