Abercrombie has been titled as Lord Grimdark for years now; I truly believe that Last Argument of Kings is majorly responsible for this.

“Round and round in circles we go, clutching at successes we never grasp, endlessly tripping over the same old failures. Truly, life is the misery we endure between disappointments.”

Last Argument of Kings is the third—and final book—in The First Law trilogy by Joe Abercrombie. Every plot lines from the first two books lead to the revelations and brutal conclusion in this installment. The story picks up immediately from where Before They Are Hanged left off, and it has come full circle. Depending on your perspective, Last Argument of Kings is either bittersweet, depressingly bleak or in between; I personally think it’s the latter. Abercrombie writes as if he’s a maestro of death and hopelessness. If you’re hanging on the edge of a cliff, Abercrombie will give you a dangling rope to save you but when you use that rope to save yourself from falling, he annihilates your hopes by using that rope to strangle you when you’re at the top. Yet, I must say that it is precisely for this unforgiving realism that I end up considering Last Argument of Kings as my favorite book in the series. 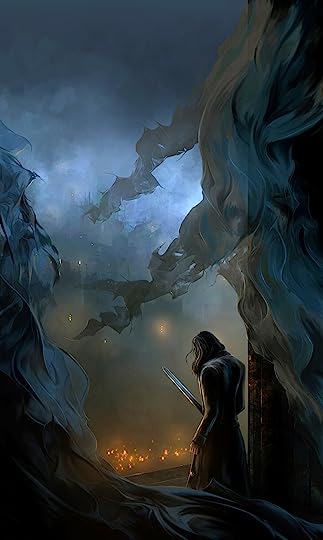 By this point of the series, I think it’s safe to assume that you—like me—have grown very attached to the utterly memorable characters, although some of the side character’s story continues in the next standalone trilogy of the series, this is where the main story arcs for the six POV characters ended. Abercrombie has expertly weaved a tale that exhibited a harsh truth; despite insanely hard works and virtuous intentions, things may not go our way just because of one cruel reason: life isn’t fair. Don’t come into this series expecting a happy conclusion, you’re not getting one. In my opinion, none of them reached what readers usually consider as a satisfying/happy ending. Expect an unflinchingly brutal series and it’s highly probable that this trilogy will go down as one of your favorite series because what Abercrombie does well, he does extremely well.

“I have learned all kinds of things from my many mistakes. The one thing I never learn is to stop making them.”

Speaking of the things that Abercrombie does well, the action scenes of this book were top-class. Out of all the grimdark fantasy series I’ve read, when it comes to close-quarter combat, Abercrombie’s First Law and Jeff Salyards’ Bloodsounder’s Arc always come to my mind immediately for many good reasons. Abercrombie conjured tempestuous war scenes within this book. We’ve seen glimpses of the deadly magic of the series in the previous two books, but Last Argument of Kings displayed the cataclysmic potential of the magic. The action sequences were bloody, brutal, and merciless. This is by far the most action-packed and explosive installment of the trilogy, even if I were to include all the books published in series so far within my assessment—this includes The Heroes—I’d still put Last Argument of Kings above all of them; both in terms of quality and quantity.

“Travel brings wisdom only to the wise. It renders the ignorant more ignorant than ever.”

The war scenes were incredible but if I were to choose one main highlight of the book, to my mind it would have to be the duel scene. Back when I first read it years ago, I immediately thought that it was phenomenal; on my reread, I still feel the same way about it. Abercrombie painted a devastating scene that’s incredibly vivid within the circle of death where chaos was unleashed. It truly felt like I was there, I could hear the sound of swords clashing into metal, I saw bloodshed in the heart-hammering trade of skills and deathblows that made the decisive duel unforgettable. Abercrombie has outdone himself in this particular scene, I’ve read many fantasy novel that features an incredible duel scene; I can vouch that the clash of death featured here—together with the one in The Sword of Kaigen by M.L. Wang—are simply the best duel scene I’ve ever read in a fantasy novel. It was THAT good!

“You can never have too many knives, his father had told him. Unless they’re pointed at you, and by people who don’t like you much. ”

Last Argument of Kings is grimdark fantasy at its best, simple as that. I loved this book on my first read, and I’m gratified to say that I still love it on my reread; maybe even more. Abercrombie is a fantastic writer and storyteller; his capability in creating cinematic scenes that are brutal, philosophical, at times hilarious, and incredibly vivid established him as a top-tier author in the genre. For years now, his books have often be recommended as a must-read series for grimdark fantasy enthusiast; this longevity of recommendation can appear only if your series receive a world-wide qualification and reputation, one that Abercrombie has certainly achieved. If you—somehow—haven’t read this series, consider fixing that mistake now. That’s all.

“If you want to be a new man you have to stay in new places, and do new things, with people who never knew you before. If you go back to the same old ways, what else can you be but the same old person?”

Before They Are Hanged: 5/5 stars