The Blade Itself by Joe Abercrombie

The Blade Itself was my first entry into a grimdark fantasy novel that I highly enjoyed; on this reread, I loved it even more.

“Once you’ve got a task to do, it’s better to do it than live with the fear of it.”

Back in October 2016, the only reason I stumbled upon this bloody marvelous trilogy was that, as many other readers did, I was looking for a reading experience that could offer me the kind of unpredictability and morally ambiguous characters that the Game of Thrones TV show did. I haven’t read A Song of Ice and Fire back then, fans of Game of Thrones weren’t so divisive in their opinion yet too, but suffice to say I was surprised that I got what I was looking for in this series, and more. I’ve read many grimdark novels since then, and it’s baffling that I haven’t encountered many grimdark characters with characterizations level as high as Abercrombie. Seeing that Abercrombie’s newest novel in the world of First Law is coming out in a month, I figured it’s about time for me to actually refresh my memory and check whether it was my nostalgia goggles playing trick on me; it wasn’t, I actually loved my reread experience more than my first read.

Picture: The Blade Itself by Alexander Preuss 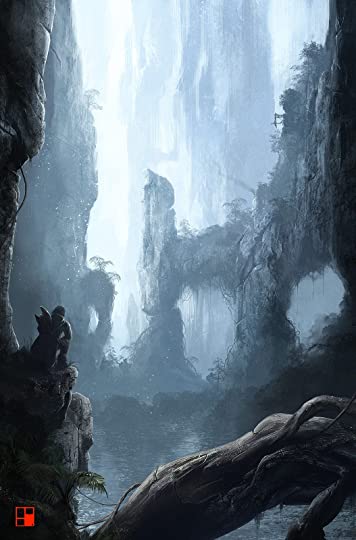 The Blade Itself is Joe Abercrombie’s debut, the first book in The First Law trilogy, a series that has inspired so many books in the current market. Thinking about it, I have lost count on how many times I’ve recommended Abercrombie’s First Law series to readers around the world; it is one of my favorite series and I truly believe Abercrombie has achieved something special for the genre. The Blade Itself can be considered a setup book; it established the characters’ personality and motivation meticulously. More than anything else, Abercrombie made sure that readers will get to know each main characters behavior and internal conflicts on an intimate level that many grimdark writers until today have tried and failed to achieve.

“The more you learn, the more you realize how little you know. Still, the struggle itself is worthwhile. Knowledge is the root of power, after all.”

The storyline on its own was interesting but from what I’ve gathered from many fans and also my personal opinion, Abercrombie became well-known in the fantasy genre because of his exceptional characterizations. Say one thing for Joe Abercrombie, say he knows how to write memorable catch-phrases and characters. Abercrombie’s prose is well-polished, accessible, and vivid; the dialogues between characters were incredibly entertaining, and the characters that he created has an enormous depth of characterizations and it all began with this debut. Logen Ninefingers, the infamous barbarians also known as The Bloody-Nine; Inquisitor Sand dan Glokta, once the best swordsman who’s now crippled and is now a torturer; Jezal dan Luthar, a selfish and narcissistic officer who dreams of glory; these main characters drove the plot wonderfully and every moment spent with them were utterly delightful, to say the least.

Regarding reading experience, I can safely say that I’ve become so much well-acquainted with grimdark fantasy than I was in 2016, and yet one of my assessment from back then still holds true until today: Abercrombie writes some of the most well-written and memorable characters in grimdark fantasy; this statement is especially true for Logen, Glokta, and Bayaz. However, this doesn’t mean that the other characters weren’t memorable. West, Dogman, Black Dow, The Feared, and many more characters that will appear in the next books eventually became characters with a significant presence in the series. You’ll see, what we get to see in The Blade Itself was merely an appetizer for greater things to come in future installments. Even Abercrombie’s famous and highly praised battle scenes within this book were still fewer and much smaller in scope compared to its subsequent sequels.

From this debut alone, Abercrombie already made me care for the anti-heroes and bastards; Logen Ninefingers is still one of my favorite characters of all time; Glokta is truly one of a kind character in fantasy; the closest comparison to Glokta I can think of would be Tyrion Lannister from A Song of Ice and Fire. The Blade Itself is a fantastic character-driven debut that starts one of the most unforgettable and important grimdark fantasy series of our time. If this is your first time starting The First Law trilogy, consider yourself lucky to have the chance to read it. If you’ve read it and it’s been a while for you, consider visiting these characters again in preparation for A Little Hatred. I didn’t realize how much I missed these characters until I’ve begun my reread. Absolutely recommended!

12 thoughts on “Book Review: The Blade Itself (The First Law, #1) by Joe Abercrombie”