The Bands of Mourning by Brandon Sanderson

The Bands of Mourning is the best of the Mistborn: Wax and Wayne so far.

Out of the three books available so far in Mistborn: Wax & Wayne series, The Bands of Mourning is definitely the best one for me. It is the penultimate installment to the second era of Mistborn Saga, and I have a feeling The Lost Metal will deliver a more superior and satisfying volume to the series. I loved The Bands of Mourning. I remember the first time I read through it, during the last 30% of the book, I kept wondering how Sanderson constantly came up with all these brilliant ideas for his stories? I remember thinking that genius is an understatement for Sanderson. It has been six years since then, and after my reread, I feel the notion keeps getting stronger and more evident. In The Bands of Mourning, Sanderson showed glimpses of the glorious future that Mistborn Saga will have. And believe me, judging from what happened at the end of this novel, The Lost Metal and Mistborn Era 3 will be spellbinding.

“I learned how much power over a situation you gain when you decide that you don’t care what others think of you.”

I should note, at this stage of the series, remembering that this is also a follow-up series to the first Mistborn trilogy, it’s getting much harder to write a comprehensive spoiler-free review. I will avoid major revelations and spoilers, and make this review as brief as possible. The Bands of Mourning continues from where Shadows of Self left off. I’ve mentioned earlier that The Bands of Mourning is the best of Mistborn: Wax and Wayne so far. I need to, however, mention that I don’t think The Bands of Mourning has reached the height of Mistborn: The Final Empire or The Hero of Ages yet. But that’s me speaking on an overall package. The quality in the last 30% of The Bands of Mourning felt equivalent to the level displayed in the original Mistborn trilogy imo. Some major twists and revelations occurred, the ending was beautiful, and most of all, if you’re reading this for the first time, the epilogue will show you what Sanderson is planning next for Lost Metal. And I mean it, literally the last words of the book. I was so hooked, surprised, and thoroughly entertained. And yet, I’m left wanting more.

“If you had to shoot a man, society had already failed.”

I will acknowledge that the train robbery sequence in The Bands of Mourning felt a bit lacking, in my opinion. But everything after that, starting from New Seran up to the iconic Sanderlanche at the end, was just unputdownable for me. I totally think the action sequences in The Bands of Mourning are the most intense and incredible of Mistborn: Wax and Wayne so far. I can’t mention specifics because they’re all spoilers, but if you’re craving the standard pulse-pounding Sanderlanche, you will be getting one here. Sanderson is a master at crafting great climax sequences at the final 20-30% of any of his books in the Cosmere. And this always makes me happy. When I’m reading a Sanderson book, I know I will receive a magnificent action sequence at the end, and it is certainly delivered in The Bands of Mourning.

This review won’t be completed without me mentioning one of the best parts, maybe even the best part, of the entire book: the character development. Wax, Wayne, and Marasi have been pivotal in Alloy of Law and Shadows of Self, and they undoubtedly developed so much in The Bands of Mourning, well, maybe not too much for Wayne; he’s still mostly the same. However, the spotlight in this book has been stolen by one character, and her name is Steris. Yes, STERIS! I remember how I felt neutral about her in Alloy of Law, but Steris received tremendous character development here, and it is not far-fetched to say that she became one of my favorite supporting characters. This was already true on my first read. And it’s even more apparent in my reread. I found Steris to be an endearing character, especially after knowing much more about her personality in The Bands of Mourning. She is such a lovable character. Read this book now, and be prepared to love another fictional character. I love how neat, sweet, realistic, and organized she is. And I love how she always has a backup plan for every situation. While Wayne is mostly there as comic relief, not to say there weren’t any emotional moments, Steris was definitely in the book to warm our hearts. I absolutely loved Wax and Steris’s relationship development. I’ve read every book in the Cosmere universe by Sanderson so far, and I think Wax and Wayne are my favorite pairing of them all. They’re at least up there with Vin and Elend for me. The ending was just beautiful, and I gladly smiled out of pure happiness.

“I’m wondering if every person I pass has similar depths, and if there’s any way to avoid the mistake of judging them so shallowly that I’m rocked when they show their true complexity.”

I will end my review for The Bands of Mourning here. I have reread the series, right from Mistborn: The Final Empire to The Bands of Mourning, in preparation for the upcoming The Lost Metal next month. And I am so excited about it. I remember saying, “I cannot wait to read The Lost Metal in 2018.” Well, that ended up being so far from the truth. But the time is finally near. The Lost Metal will be out soon. Sanderson has mentioned that Mistborn Saga and his magnum opus, The Stormlight Archive, are two series in the Cosmere universe that he will work on until the end of his career. That means we still have at least seven more books in the Mistborn Saga. Including The Lost Metal, which will conclude Mistborn: Wax and Wayne series, there will be two more Mistborn trilogies. One takes place in a contemporary setting, and finally, the last trilogy will be set in a futuristic sci-fi setting. And I can safely say this, I will be joining not only all the adventures in the Mistborn Saga but also the entire Cosmere universe. Bring it on, The Lost Metal.

Picture: The Bands of Mourning by Shuravf 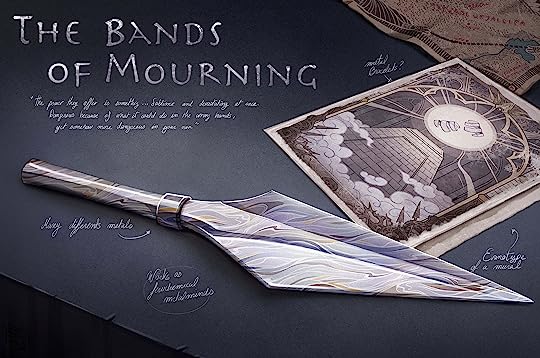 P.S: Sanderson has mentioned it’s better to start reading Mistborn: Secret History only after you finished reading The Bands of Mourning. I suggest you follow his advice.