The Fires of Heaven by Robert Jordan

You’re not in Tel’aran’rhiod. The flaming ta’veren has indeed pulled me back into this series.

“Mat had not learned the lesson that he had. Try to run away, and the Pattern pulled you back, often roughly; run in the direction the Wheel wove you, and sometimes you could manage a little control over your life. Sometimes. With luck, maybe more than any expected, at least in the long haul.”

The passage above felt like it was directed at me. No one is more surprised by this turn of events than I am. Yes, not only did I actually continue reading The Wheel of Time, but I also ended up enjoying The Fires of Heaven, the fifth book in The Wheel of Time series by Robert Jordan. For the past two and a half years, I was uncompromising in voicing my disappointment with The Shadow Rising. But deep inside, there was still a part of me that had been tainted by the sweetness and danger of saidin, and he was determined to finish the series no matter what. And then last year, the TV show adaptation came out, and the final episode of the first season was, in my opinion, so bad that it put the book series in a better light for me. Plus, taking a break from the series for years definitely helped a lot. One of the things that decreased my experience with reading The Shadow Rising most was my ridiculously high expectation towards it. For years before I started reading The Wheel of Time, I heard from many fans of the series that The Shadow Rising is the best book written by Robert Jordan; I failed to shake that notion entering that book. With The Fires of Heaven, I read it with the lowest possible expectation, and I more or less knew what I’m getting into; I felt like I could appreciate the good and tolerate the flaws of the series equally. Or maybe, The Fires of Heaven is just overall a superior book than The Shadow Rising for me.

“Always leave a way out, unless you really want to find out how hard a man can fight when he’s nothing to lose.”

The story in The Fires of Heaven continues from where The Shadow Rising ended. Right from the beginning, I was pleasantly surprised by what I was reading. I never expected I would end up devouring the first quarter of this 350k words novel so quickly, but that transpired. The Fires of Heaven is an incredibly character-driven novel. The slow-pacing of the series persisted in this novel, and there were a few sections in the middle of the book where it did feel difficult to continue; I’ll get to that later. But I just loved reading Rand al’Thor’s POV chapters in The Fires of Heaven, so much more than I expected. It may have taken five novels to get this development, but I found it refreshing to see Rand learning (and using) more of his power as the Dragon Reborn. More importantly, even though Rand can be categorized as arrogant in this book, I think it’s not wrong for him to act and behave as he did. For the past four books, every faction and everyone insisted on using Rand for their own benefit, and that situation continues to this novel. It was super satisfying to see him becoming more of a leader and standing his ground strong in many instances instead of constantly being led around like a puppet. I mean, Rand IS The Dragon Reborn! He could destroy or save the world. I can’t stop thinking about balefire and the implication of its power we get to witness here. And guess what? Rand’s story wasn’t even my utmost favorite section in The Fires of Heaven; it’s Matrim Cauton’s POV chapters.

“He hoped Mat had a fine time while he was free. He hoped that Perrin was enjoying himself in the Two Rivers… He hoped it because he knew he would draw them back, ta’veren pulling at ta’veren, and he the strongest. Moiraine had named it no coincidence, three such growing up in the same village, all nearly the same age; the Wheel wove happenstance and coincidence into the Pattern, but it did not lay down the likes of the three of them for no reason. Eventually he would pull his friends back to him, however far they went, and when they came, he would use them, however he could. However he had to. Because he did have to. Because whatever the Prophecy of the Dragon said, he was sure the only chance he had of winning Tarmon Gai’don lay in having all three of them, three ta’veren who had been tied together since infancy, tied together once more.”

I’m trying my best not to raise my own expectation here, but I must say, I absolutely enjoyed reading Mat’s POV chapters in The Fires of Heaven. Despite his relatively few appearances here, the impact of what he achieved raised his potential to become my favorite character in the series. Mat ranged from underwhelming to okay in the past four books, in my opinion. It felt like Jordan didn’t know what to do with his story arc yet. Or maybe, Jordan did know, but it took him five books for Mat’s character arc to begin. If you don’t know me, I’ve mentioned constantly that reluctant heroes have always been one of my favorite types of main characters to read, and Mat fully embodied this. His determination to try to escape the Pattern he’s pushed into was understandable; I actually felt bad for him and the streak of bad luck he encountered. But luck, good or bad, has always been a part of his life. Gambling is deep inside Mat, and reading the implementation of the new abilities he has acquired to turn the tide in his favor was a fist-pumping moment. This and the creation of The Band of the Red Hand, plus the ending sequence of the book, were my favorite parts of the entire novel. I loved it, and I look forward to the next chapter of his story and development.

“I’m a gambler, a farmboy, and I’m here to take command of your bloody army!

Other than Rand and Mat, I also loved being exposed to learning about the Aiel culture. Jordan’s world-building has always been something that I admired about the series, and The Fires of Heaven expanded upon this further. I also think most of the supporting characters played a role in enriching my reading experience. And as I just mentioned, the final quarter of The Fires of Heaven was well-written and exciting. Honestly, I love to continue to the next book immediately, but I will not make the same mistake I did a few years back when I tried to binge read this series for the first time.

Picture: The Fires of Heaven sketches by Dan dos Santos 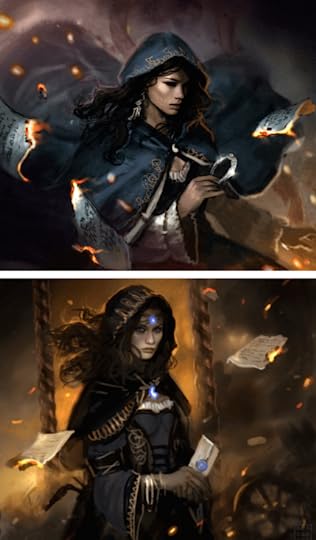 All of these praises, however, don’t mean that I thoroughly loved The Fires of Heaven. As I said at the beginning of the review, this is a book filled with noticeable flaws; I just enjoyed it despite them. Perrin is absent in The Fires of Heaven. I genuinely don’t mind Perrin’s lack of appearance; Perrin is simply not a memorable main character at this stage of the series yet to me. But in exchange for Perrin, we get a lot of Nynaeve’s POV chapters. And I have several problems with this. Nynaeve continues her status of being one of the most infuriating characters I’ve ever read in fantasy here. Yes, she is a strong-willed character. But there were too many moments where I seriously just wanted to bash her head in and tell her to shut up, listen, and start admitting your own mistakes. Oh my god, Egwene lecturing Nynaeve made me internally scream with joy. Female characters—especially Nynaeve—continue to undermine men every step of their way, and I stand by my words that Jordan wrote some of the worst romances in fantasy. I am not sure whether it is apt to call them romances. They all just happened without proper build-up or developments; they were all totally impossible to understand. Then there is the boring circus and also Elayne’s line of thoughts towards Thom, which confused the heck out of me, and Aviendha’s never-ending tantrum and mood swing. Frankly, the only parts I enjoyed reading in Nynaeve and Elayne’s chapters were the events in Tel’aran’rhiod and Uno—what a bloody riot, this guy.

“We have made the world dance as we sang for three thousand years. That is difficult habit to break, as I have learned while dancing to your song. You must dance free, and even the best intentioned of my sisters may well try to guide your steps as I once did.”

So, the problems in the series are still evident in this installment; if you struggled with them as I did, do not expect them to disappear with this book. Jordan frequently relied on traveling sections, overly detailed descriptions, and repetitive explanations to fill the pages of his series; these undoubtedly affect the pacing in the middle parts of The Fires of Heaven. I also preferred the action sequences to be longer and more vivid. I found Jordan’s prose during his descriptions of the clothing and setting way too detailed for its own good sometimes, and unfortunately, not detailed enough during the battle scenes. I did, however, get what I wanted in the final quarter of the novel. So overall, what changed for me? How was I able to tolerate these issues? Regarding the female characters’ behavior, I suggest accepting them for what they are and maybe, treating their antics and behaviors as a running joke in the series. I am sorry, but that’s the only method I could apply to my reading experience to barely understand why they needed to be that long. If I accept their antics seriously, it would just drive me nuts and insane. As for pacing issues, taking a break from the series feels mandatory. Based on my experience, I don’t think I would be able to tolerate the flaws if I had binged read this series like I did almost three years ago. By doing this, I felt like I successfully embraced the good while acknowledging, but not being too infuriated by, the flaws of the novel/series.

At the end of the day, this could all be just because The Fires of Heaven is, in my opinion, a much better book than The Shadow Rising. I know that this is an unpopular opinion. I seldom heard anyone consider The Fires of Heaven one of their favorite books in the series. I am speaking regarding the one written solely by Robert Jordan. Personally speaking, The Fires of Heaven is at least up there with The Great Hunt as the best of the series so far. I cannot determine when I will finish reading the series. But I do know I will be reading the Lord of Chaos within this year, and hopefully, the seventh book, too! Going further beyond that within this year might be pushing my luck. This 2,000 words review I wrote is me circling around to say: “The Wheel of Time, I am back. You win again, ta’veren.”

“We’ll drink the wine till the cup is dry,
And kiss the girls so they’ll not cry,
And toss the dice until we fly,
To dance with Jak o’ the Shadows.”

2 thoughts on “Book Review: The Fires of Heaven (The Wheel of Time, #5) by Robert Jordan”