“We shouldn’t have to go around congratulating each other for behaving with basic human dignity.”

Orbit Books made the right decision to traditionally publish this series. In every element of the novel, you can see how much passion the author infused into the narrative. The plot, the characters, the world-building, the prose; even the quality of the physical book were all wonderful. No kidding, the self-published trade paperback edition of the novel put a lot of traditionally published books to shame; under the lights, you can actually see the ink shone.

Senlin Ascends has a simple premise. Thomas Senlin, a timid, kind-hearted, and sensible teacher is on a honeymoon with his newlywed wife—Marya—to stay on the third level of the majestic and literally gigantic Tower of Babel. Before they even got the chance to start their honeymoon properly, Thomas lost track of Marya in the hectic and chaotic market. Now, Senlin will have to explore the tower of Babel—which turns out to be, of course, not as beautiful as he expected—on a wild goose chase to find his missing wife. 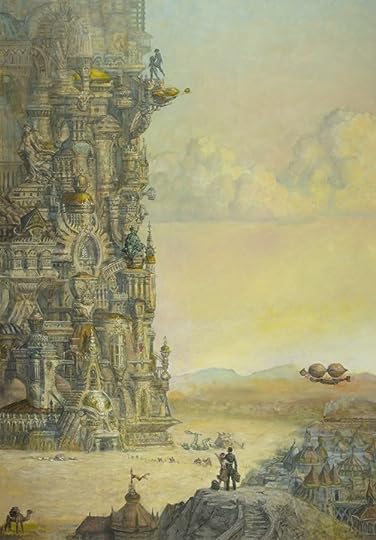 But the simple premise is backed by many strong factors. Senlin Ascends is different from many mainstream fantasy novels, but it still retains elements that make any fantasy novel compelling and intriguing. Friendship, philosophies, adventure, heists, hope, despair, and a tiny section of well-written romance; readers will find a lot of relatable themes in this book. The complexity of the plot kept on unfolding; the narrative is divided into three acts, and in my opinion, the three acts felt like three sequential novellas that formed a bigger and connecting story.

“Senlin did not believe in that sort of love: sudden and selfish and insatiable. Love, as the poets so often painted it, was just bald lust wearing a pompous wig. He believed true love was more like an education: it was deep and subtle and never complete.”

The characters were well-written. Thomas Senlin’s character development was amazing; his growth from the first part—when he was timid, sensible, innocent—to how he became the man he must become to achieve his goal felt gradual and realistic. Thomas has always been a man of the written words, and now, he must use his wit and intelligence to become a man of action. However, another thing to be praised of Bancroft’s storytelling style was that every side character—Marya, Edith, Adam, Iren—received the same quality of treatment as Senlin did. Backgrounds of the characters were revealed, and each supporting character’s circumstances and personality were explored as efficiently as possible.

“It is easier to accept who you’ve become than to recollect who you were.”

One of the main highlights of the book, without a doubt, lies in its world-building. I’m going to spare you the details here for your own good, you have to experience every ringdom for yourself. Every part of the Tower of Babel is unique, distinctive, and bizarre; it made me feel like I just went on an unforgettable trip. Below here is a picture of the Tower of Babel illustrated by the author himself, and this is just a tiny fraction of the tower!

Picture: The Tower of Babel, The Lower Ringdoms by Josiah Bancroft 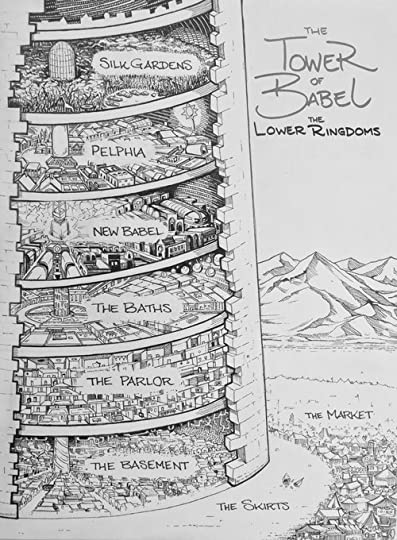 The world-building felt utterly immersive and atmospheric. Bancroft’s prose is accessible, beautiful, and well-polished. the Tower of Babel is a place you want—and should—dive into if you want an amazing and distinctive reading experience. Plus, I’m a sucker for Skyships and sky pirates. I’ve played a lot of steampunk video games, let’s say Bioshock Infinite for example, and Senlin Ascends made me feel like I just played that game again; this is a good thing.

The hype for Senlin Ascends are there for many good reasons. There’s no doubt that luck is required to get a signed deal, but I’m of the mindset that in life, in everything you do, luck can be always be improved. With hard work, perseverance, and patience, something great will not be lost to the world forever, and that’s exactly what happened to Senlin Ascends. Remember, this novel was first published in 2013. Yes, 2013! It took four years for a publishing company to finally pick up this hidden gem.

I owe a gratitude to Mark Lawrence (huge thanks to him, seriously) and Emily May for spreading the awareness for this book. If Bancroft gave up writing after releasing the sequel, Arms of the Sphinx in 2015, he probably won’t be signed by Orbit Books now. Once you know you’ve created something great with all your efforts; persevere and never give up. It’s always easier said than done, but that’s how it is in this world. Now, Josiah Bancroft has been signed by Orbit, and I’ll say that it’s totally well deserved. I’m going to conclude my review by stating that Senlin Ascends is a stunning fantasy steampunk debut; it’s easily one of the most unique fantasy novels I’ve read. 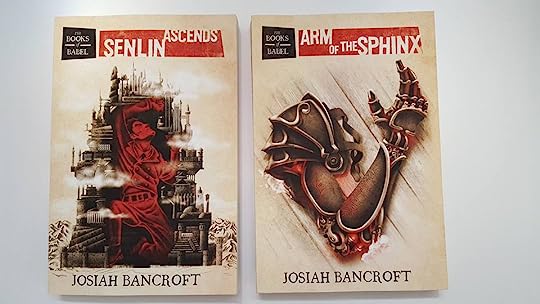