A truly wonderful start to a trilogy and one of the most original world-building I’ve ever had the chance to experience in a novel.

City of Stairs is the first book in the The Divine Cities trilogy written by Robert Jackson Bennett, and let me tell you all something, this was one of those series that has been sitting in my TBR pile for way too long; since March 2017. Not only that, but I’m ashamed to admit that it was also one of those series I considered removing from my TBR pile due to diminishing interest caused by the TBR mountain of oppression. And I’m so damn pleased I didn’t do that; better late than never because this book was great. City of Stairs also provides a unique experience in a genre that’s filled with the medieval setting; I honestly don’t mind medieval settings in my fantasy books, but it’s always awesome to read a fantasy book with different flavors, too.

Even though City of Stairs rightfully belongs in the high fantasy genre, it’s actually quite difficult for me to put a proper label of genres to this book. The story is a murder mystery, and it takes place in a high fantasy world imbued with sci-fi—and horror—elements. Genre classifications aside, I do know that this is a magnificent book; it even made it to my “favorites” shelves.

The plot in City of Stairs starts with a murder. Our main character and her secretary/bodyguard—Shara and Sigrud—are in charge of catching who the killer is. This investigation, of course, eventually become more complex as the story progressed, and what first started as a simple murder mystery ended up turning into something so much bigger and dangerous in both scope and tension. The story itself is a slow burn, full of compelling politics and thought-provoking religious discussion. To be honest, it took some time for me to get comfortable with the writing and setting of the book—around 25%, give or take—and this is the only minor issue I had with the book. Believe me, don’t let the beginning put you off; it’s a book worth continuing because the narrative keeps on getting better as it progressed. In my opinion, the world-building alone was more than enough to make this novel a must-try for any SFF fans.

“Life is full of beautiful dangers, dangerous beauties… They wound us in ways we cannot see: an injury ripples out, like a stone dropped in water, touching moments years into the future.”

Most of the story in City of Stairs takes place in the city of Bulikov, a Russian-inspired city that prospered due to the miracles and powers provided by the Divinity—the gods in this world. However, these divine protectors were killed, and the city of Bulikov is now a mere shadow of its former supremacy. There’s also the Indian-inspired city of Saypur. These two inspirations for the setting alone were something relatively rare in the fantasy genre; at least from my experience. But what makes the world-building superb was how phenomenal, intricate, and original it was. The integration of lore, history, religions, culture, mythologies, and divinities into every single narrative in the book was incredible. The world-building was divine in quality and every sense of the word.

“The Divine may have created many hells”, he says, “but I think they pale beside what men create for themselves.”

As always, the characters and their characterizations were the most important part. I’m pleased to say that I highly enjoyed reading these character’s stories. Three dominant protagonists drive the narrative, they’re Shara, Sigrud, and Mugalesh. In my opinion, Bennett is an efficient writer; his characters don’t contemplate a lot, but they always have enough actions and dialogues for their character to be distinctive. For example, Sigrud is a side character with minimal dialogue, but he ended up becoming my favorite character in City of Stairs. 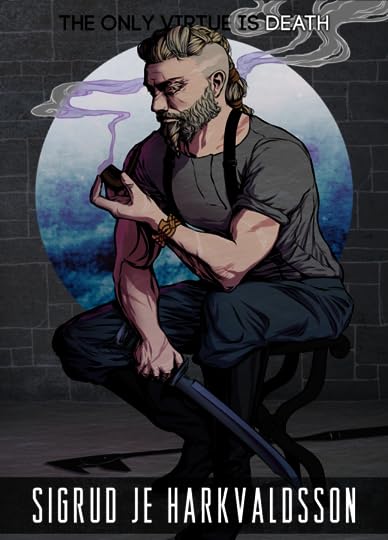 Overall, City of Stairs was a captivating and divine start to a trilogy. Reading a book as refreshing as this in fantasy felt like inhaling a breath of fresh air. For those of you who are looking for an original SFF novel filled with a great plot, characterization, prose, and most of all, phenomenal world-building, then I urge you to give this book a try, In my honest opinion, City of Stairs is one of the best starts to a trilogy I’ve ever read, and it was truly worth the climb.

“…history, as you may know, is much like a spiral staircase that gives the illusion of going up, but never quite goes anywhere.”