The Return of the King by J.R.R. Tolkien

“For like a shaft, clear and cold, the thought pierced him that in the end the Shadow was only a small and passing thing: there was light and high beauty for ever beyond its reach.”

It’s over. I have finally finished reading The Return of the King, the third and final part of The Lord of the Rings by J.R.R. Tolkien; This means that I am officially done with Tolkien’s main novels in The Middle-Earth universe, and I’m proud of myself for it. I’ve read plenty of epic fantasy series more difficult and lengthy than this trilogy, you might be confused why I’m so proud of this. However, as I’ve mentioned in detail in my review for The Fellowship of the Ring, after continuously putting the first book into my DNF pile, completing this trilogy felt immensely satisfying. Plus, no more gatekeepers—despite how many fantasy books I’ve read—would be able to accuse me of “you’re not a fantasy fans unless you’ve read The Lord of the Rings” anymore. And to be honest, if someone said this to you, you should just ignore them. That being said, now that I’ve finished this series, I will have to admit that Tolkien certainly earned his fame. The writing may not hold up too well for modern fantasy readers reading this for the first time now, but this being published more than sixty years ago? Truly amazing. 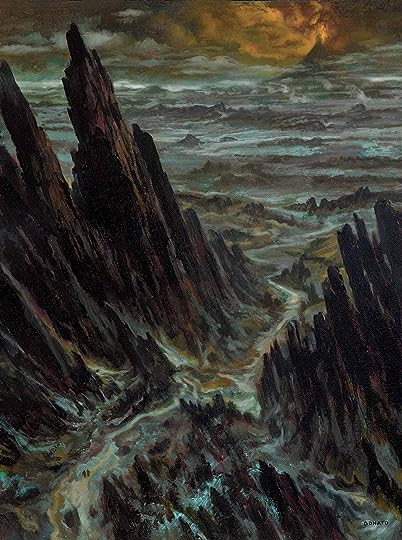 There’s something magical and timeless in the themes told in The Lord of the Rings, and The Return of the King is the conclusion of it all. It is keeping the fire of hope burning even in the persisting and overwhelming darkness. Often we see underdogs and farmboys story as a cliché now, but as I repeatedly say, they became a cliché because they worked a LOT of times. In the end, it always depends on the execution of the narrative to make us care about the journey and characters of the story, but themes of hope and friendships—among many others—are extremely strong. I think we occassionally forget one very important thing about Frodo and Sam, and that is the fact that they are underdogs and unlikely heroes.

“I am glad you are here with me. Here at the end of all things, Sam.”

Really ponder about it again; these Hobbits are unlikely heroes—small and bereft of any physical abilities except to eat so many times in a day—trying to do their best in the name of good, friendship, loyalty. Aragorn, Legolas, Gimli, Theoden, Eowyn, and all the other warriors, too—despite being separated from the Ring-bearers—believed with all their hearts that they will do what’s right. Everything about it is so inspiring, and honestly, the friendship between Frodo and Samwise Gamgee is still one of the best friendships portrayed in a fantasy series. In addition to these, The Return of the King also put Eowyn into the spotlight of the narrative, and I LOVED it; Tolkien has created one of the most iconic scenes in fantasy with what Eowyn achieved in this book.

“But no living man am I! You look upon a woman. Éowyn I am, Éomund’s daughter. You stand between me and my lord and kin. Begone, if you be not deathless! For living or dark undead, I will smite you, if you touch him.”

I also think that both The Towers and The Return of the King were far easier and engaging to read than The Fellowship of the Ring. The dialogues—excluding their constant use of odd “Good-bye!” and outdated words—between characters were compelling, filled with unforgettable passages, and the songs were much fewer, too. Most importantly, though, there’s no more Tom Bombadil; despite many fans’ love for this character which I don’t think I’ll ever understand, I seriously found Bombadil to be so out of place in this trilogy. There’s one thing in this book that I wish more newly released fantasy books would still include in their final installment: long epilogue. I love reading long epilogue or “after the battle” chapters. Obviously, I don’t mean for an epilogue chapter to be as long—the Scouring chapter near the end was so bizarre—as the one featured in this book, but I’m actually surprised that many people hate long epilogues. Personally, after so many battles and destructions, I would love to know about the characters’ fate after the conflict ended rather than just saying bye-bye then immediately in one or two short chapters. Sometimes, it feels like the story ended before I even got to say goodbye to the characters.

“It is not our part to master all the tides of the world, but to do what is in us for the succour of those years wherein we are set, uprooting the evil in the fields that we know, so that those who live after may have clean earth to till. What weather they shall have is not ours to rule.”

In my opinion, the most disappointing elements from this trilogy were the action sequences. I’ve said this before in my review of The Two Towers, Tolkien really didn’t focus his writing on the action sequences. As someone who utterly loved the movies and the epic battles, the battle scenes in these books were inferior and too short to my liking. I enjoyed reading the build-up and preparations for the battles, but I didn’t get the explosive impact from reading the war scenes themselves. The battle sequences in the films and the official/fan-arts conjured out of the movies/text are by far superior to the prose version, in my opinion. In the movie adaptation, the Battle of Helm’s Deep in The Two Towers and the Battle of the Pelennor Fields in The Return of the King were stunningly incredible and jaw-dropping. I can’t say the same about the books; I’ve read a LOT of fantasy books that have better battle/war scenes.

After all said and done, I think the answer to whether I love the books or the films more is crystal clear. The Return of the King is a classic and wonderful conclusion to Tolkien’s legendary series. I will not deny the importance of Tolkien and this series in shaping and popularizing the fantasy genre, that would be insane. The Lord of the Rings is a great trilogy, but I think the writing is a bit outdated now for modern fantasy readers reading this for the first time. I definitely loved the movies more, and I do believe that The Children of Hurin is Tolkien’s best—and darkest—story. I’m glad to have read The Lord of the Rings, but I doubt I’ll ever reread them in the future. As for the movies? I will rewatch them again and again and again and again.

“I will not say: do not weep; for not all tears are an evil.”