The Two Towers by J.R.R. Tolkien

“It’s like in the great stories, Mr. Frodo. The ones that really mattered. Full of darkness and danger they were. And sometimes you didn’t want to know the end… because how could the end be happy? How could the world go back to the way it was when so much bad had happened? But in the end, it’s only a passing thing… this shadow. Even darkness must pass.”

Friendship, hope, resilience, faith, justice, and bravery; these days, good-hearted with no grey morality characters are much easier for fantasy readers to dismiss. I totally get it; this type of characters and stories have been done more than a million times in fantasy stories, and readers—myself included—sometimes prefer more complexity. However, I also personally think that these kinds of characters are still much needed in the stories we devour. Maybe even more than ever. The Two Towers, being the second part of The Lord of the Rings, touches upon these themes by transporting its readers to an old and familiar ground, which I highly enjoyed reading.

I’m genuinely surprised by how fast and immersed I am with reading The Two Towers. To be honest, I never expected to find myself compelled from reading most of Tolkien’s work, but I certainly did with this one. This is surprising to me because The Two Towers have often been mentioned as being even slower and tedious than The Fellowship of the Ring by several fans of the series. There’s something about The Two Towers that worked reasonably well with me. To be clear, there’s no clear beginning and ending with this volume, but that’s also why what the characters faced in The Two Towers resonated; they’re doing whatever they can with the hope that their faith towards one another will be rewarded. Many people in this world say and believe that true faith is achieved once you believe in something that you can’t see with your eyes. After what happened at the end of The Fellowship of the Ring, the main characters are plagued with doubts on whether they can succeed in completing the journey they set out to do. And yet they persevere. Honestly, what they had was only the faith that everything will maybe turn out alright if they do everything they respectively can do the best.

And isn’t that what we all do in our lives?

“War must be, while we defend our lives against a destroyer who would devour all; but I do not love the bright sword for its sharpness, nor the arrow for its swiftness, nor the warrior for his glory. I love only that which they defend.”

I’m also, once again, amazed at the film’s portrayal of the Battle of Helm’s Deep. Now that I’ve read the scene in the original text for the first time, I will say that what the movie did on this sequence was so much more superior to what’s written. I’m not saying that Tolkien’s Battle of Helm’s Deep was poorly written, it’s just that the movie took the best quality of the text and increased the buildup, the tensions, and the execution of the battle dramatically. 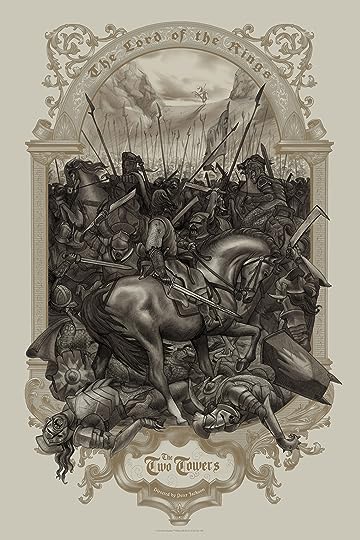 If there’s one thing that the books do better, it would be the world-building and the characterizations for Faramir and Frodo. Frodo in the movies, in my opinion, was mediocre. I liked Frodo in the book more, and I think Tolkien’s writing of Frodo and Samwise Gamgee’s friendship was wonderfully done; it’s no wonder the movie could execute their friendship to its maximum potential. I’ve been saying this since I first watched the movies, and I will repeat it again that everyone needs their own Samwise Gamgee in their life.

‘Why, Sam,’ he said, ‘to hear you somehow makes me as merry as if the story was already written. But you’ve left out one of the chief characters: Samwise the stouthearted. “I want to hear more about Sam, dad. Why didn’t they put in more of his talk, dad? That’s what I like, it makes me laugh. And Frodo wouldn’t have got far without Sam, would he, dad?”‘
‘Now, Mr. Frodo,’ said Sam, ‘you shouldn’t make fun. I was serious.’
‘So was I,’ said Frodo, ‘and so I am.”

As for the parts that didn’t work for me, I’m going to keep this brief by saying that every single scene revolving around Merry, Pippin, Treebeards, and the Ents bored me to oblivion. Thankfully, there aren’t too many of them, but wow they totally tested my patience; their scenes were as painfully slow as the Ent’s communication with each other. 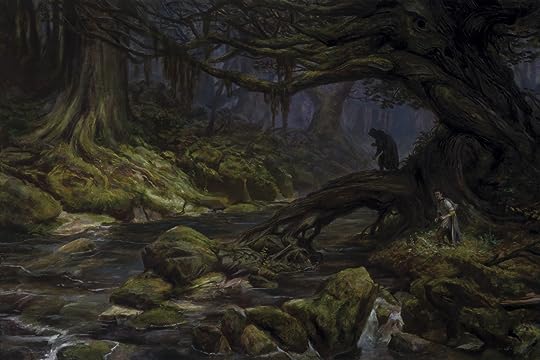 Overall, though, despite a few issues, I definitely enjoyed reading The Two Towers more than reading The Fellowship of the Ring. Not going to lie, it helps a lot that there’s no Tom Bombadil’s nonsense here. I only have one more book left, once I’m done reading The Return of the King, it would mean that I’m finally done with Middle-Earth (I’ve read Silmarillion, The Hobbit, and the three Great Tales of Middle-Earth) after all these years.