Changes was insane, a true Game-Changer for the series.

If you’ve been paying attention to the title of each volume in The Dresden Files series, you’ll notice that every one of them is made up of two words. There’s, however, an exception for one title, it’s this book. Changes, the twelfth installment in The Dresden Files has often been praised as the best book in the series. I still have Ghost Story, Cold Days, Skin Game, and Peace Talks (yay!) to go through, but for now, I’m inclined to agree with their assessments.

“Even in winter, the cold isn’t always bitter, and not every day is cruel.”

It takes a lot of guts for Harry to think that way. Harry’s life has always been filled with cruelties that piles on endlessly, and the only saving grace to his sanity is probably his happy-go-lucky attitude, and even that part of him is about to be put to the limit and beyond here. Changes, in a way, retain the similar storytelling structure that the series has, but the events that occurred signified several pivotal and turning points in the series. If you’re reading this expecting the book would be one of happiness, joy, and fun, you couldn’t be farther from the truth. It is the darkest and the most solemn of the series so far, and it is exceptional. It’s about time, really. As much as I enjoyed reading the series, things were starting to get slightly repetitive, and this volume turned everything upside down.

“Laugh whenever you can. Keeps you from killing yourself when things are bad. That and vodka.”

However, the grim direction of the plot doesn’t mean that Butcher sacrificed the staples and hearts of the series. The characters, their evolution (seriously, if you’re reading this book or review, look back to these character’s first appearances and see how far they’ve progressed), and the development of their relationship with each other continues to be my favorite parts of the series. Moments that made me genuinely smile or laugh still existed, but additionally now, some scenes that truly tugged at my heartstrings were spotlighted extensively.

“Martin was alphabetizing my bookshelves. They used to kill men for sacrilege like that.”

Changes features the best action sequences in the series so far, by FAR. Now, if you’ve followed my reviews for this series, you’ll know that I had a minor issue with the longevity of the action sequences in each respective volume; I felt that some of them were longer than necessary. However, that case is non-existent in this novel. The last four of five chapters contained the biggest action sequences within the series, and I never felt bored. Not for one damn page. It was the definition of adrenaline infusion; so much was at stakes, emotional twists and turns were delivered non-stop, and I frankly devoured these in one sitting. Plus, it was super satisfying to see the fortification of Harry’s magical power.

“They say you can know a man by his enemies, Dresden.” He smiled, and laughter lurked beneath his next words, never quite surfacing. “You defy beings that should cow you into silence. You resist forces that are inevitable for no more reason than that you believe they should be resisted. You bow your head to neither demons nor angels, and you put yourself in harm’s way to defend those who cannot defend themselves.” He nodded slowly. “I think I like you.”

Without a doubt, Changes is the best entry in The Dresden Files for me, and I’m pressed to find out how or will Butcher topped this one. In fact, this is the first time I give a 5-stars rating to an installment in the series. The past eleven books have been fun and entertaining, but this one got the incredibly engaging, high-stakes, and heartbreaking package that made it sticks with me. I’ll stop this review here. I’m sorry I can’t divulge any details on the plot, but I read this one without knowing anything about it, and I’m very thankful to the fans of the series for it. The book ended on a massive cliffhanger, and I honestly have no idea what will happen next, but suffice to say, Changes fortified my excitement to continue reading the series.

“But there were some things I believed in. Some things I had faith in. And faith isn’t about perfect attendance to services, or how much money you put on the little plate. It isn’t about going skyclad to the Holy Rites, or meditating each day upon the divine.
Faith is about what you do. It’s about aspiring to be better and nobler and kinder than you are. It’s about making sacrifices for the good of others – even when there’s not going to be anyone telling you what a hero you are.” 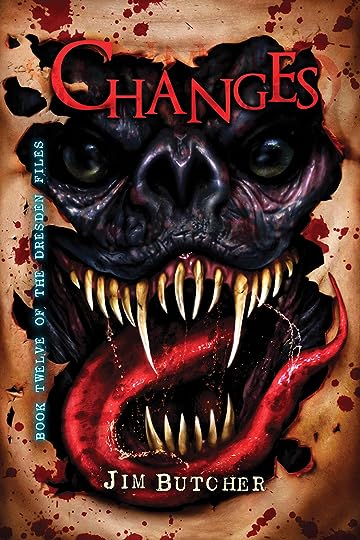