Kings of the Wyld by Nicholas Eames

Every avid fantasy reader, pay attention and let me do you a favor. Make sure you read this book no matter what. As of now, I’m calling Kings of the Wyld one of the best fantasy debuts of all time.

Imagine this: legendary rock bands that have disbanded—such as The Beatles, Led Zeppelin, or Nirvana—coming back for one more tour. Now, replace the rock bands and concerts with mercenary bands and killing monsters. I won’t go into the details on the music allusions, but it’s ubiquitous throughout the whole book, and you should experience it yourself; in my opinion, they’re a Joy To the World of fantasy.

Clay Cooper and his Band, Saga (The Kings of the Wyld), were once the greatest of the greatest mercenary Bands. But now, the members have separated and grown old, fat, drunk, or a combination of the three. One day, Gabriel—one of Clay’s ex-bandmates—arrived at Clay’s place asking for help on a dangerous quest to save his daughter. This quest will require the Band to get back together for one more tour across the Heartwyld, a gigantic forest full of a plethora of monsters, beasts, and many other deadly sentient beings.

Kings of the Wyld is a rollicking adventure that managed to raise a variety of emotions ranging from happiness to poignancy within me. It’s a rarity to read a novel capable of making me grin like a fool throughout the whole novel while also making me tense within those same pages. You should know, though, that despite the book being very humorous with its pun and dark comedy, Kings of the Wyld shouldn’t be viewed as a complete comedy fantasy. Eames knows how to shifts the reader’s emotions swiftly. One moment you’re smiling or laughing, and before you realize it, you’ll be holding your breath or on the brink of tears. It’s safe to say that I’m genuinely pleased by the narrative; Eames has crafted a superlative blend of marvelous actions, hilarious humor, and tension.. And I can certainly say that this is a book with lovable characters, gripping battles, intricate world-building, and well-polished prose.

Every character in the book, whether it’s the five members of Saga or the side characters, managed to make me really care about their fate and circumstances, and Eames did this all within the span of a single book. They are unique, lovable, believable, and compelling to read. The witty banter between these characters, their puns, and their random behaviors never failed to entertain me. However, when it comes down to it, what made me really attached to Saga was their brotherhood, friendship, loyalty, and familial love. Like a vacation or road trip you take with your best friends who will always wait for you, every time I took a break from reading it, I found myself compelled to pick it back up again to continue my tour with the Band.

“As individuals they were each of them fallible, discordant as notes without harmony. But as a band they were something more, something perfect in its own intangible way”

IF I have to choose one favorite character , it will have to be the main POV character, Clay Cooper. Reluctant heroes have always been one of my favorite protagonist traits in a story; Clay Cooper fits into this category perfectly. It’s one of the reasons why he’s my favorite character of the book; he’s even included in my personal list of my favorite book protagonists. Whether it’s out of friendship, conviction, or other motivation, I love how these types of characters—despite their reluctance and circumstances—are willing to do what’s right. 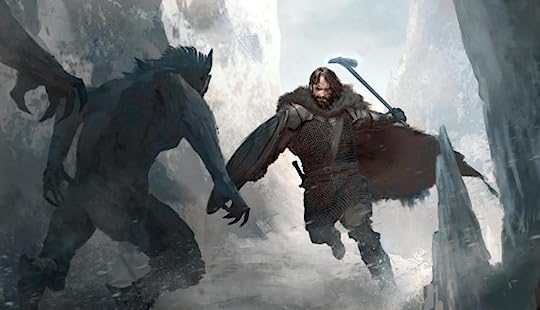 Have I mentioned that there are a lot of magnificent action sequences in the book? Every action scene felt intriguing, dynamic, and engaging. The buildup to the climax, in particular, was just fantastic. This build-up was done too well that it did lead me to believe that the climax sequence could have been better if it received more pages. Don’t get me wrong, it’s still great. But it would’ve been more awesome with extra exposition because the buildup to the climax sequences—and the setting itself—were so absorbing, well-written, and unexpectedly epic. But this is just me being nitpicky. 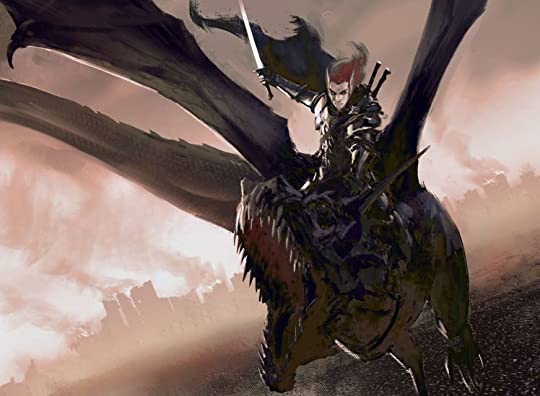 If you’ve been following the frequency of my reviews and updates, you should know by now that gaming is one of my biggest passions. Imagine my happiness upon finding out that a myriad of video game Easter Eggs was embedded into the world-building. Music allusions aside, I envisioned the world that Eames created in Kings of the Wyld as a stunning mix of epic fantasy and Role-Playing Games. Skyships, legendary swords, beasts, and fantastical creatures such as chimera, wyverns, dragons, golems, and many more, are elements often encountered in mythologies and RPG, and they are all here. I mean, there’s even a character named Firaga; Firaga is the name of the highest tier for fire magic in the beloved Final Fantasy franchise. Eames even implemented “the cake is a lie” into the book! It’s a popular gaming reference from Portal. And my nerdy self was completely delighted by all these features. I could ramble for so much longer about the brilliant world-building intricacy in its lore, maps, and settings, but I’ll stop it here.

The prose itself contains no resemblance to a debut effort; the prose felt extremely well-written and polished. To properly sum up my thoughts on Eames’s prose, it felt like reading a mix of Joe Abercrombie’s (one of my favorite authors), Scott Lynch’s, and Patrick Rothfuss’s (again, one of my favorite authors) writing style in one novel. We get something akin to Abercrombie’s dark humor and dramatic scenes, Lynch’s crude dialogues and banter, and then add a flavor of Rothfuss’s simple plus beautiful prose to them. There is nothing left to say other than this is a work of brilliance.

The talk about life and death, in particular, was probably where Eames’s prose shines the most (in addition to the hilarious dark humor, of course) for me; here’s one of my favorite quotes from the book on the topic:

“Life was funny, and fickle, and often cruel. Sometimes the unworthy went on living, while those who deserved better was lost.

Or not lost, he considered, since they lingered on in the hearts of those who loved them, who love them still, their memory nurtured like a sprig of green in an otherwise desolate soul. Which was, he supposed, a kind of immortality, after all.”

There were tons of other gems like this in the novel. It’s simply incredible how the prose managed to always pull me back into the story instantly.

For those of you who prefer to wait for the next book in the series to come out first before you start reading a new series, you certainly can do that here, but if that’s truly your only reason, I’m saying that you’re postponing reading one of the most excellent debuts of all time. Trust me; I’m a binge reader, and most of the time I follow the same behavior, too. Luckily, this book can absolutely be read and considered as a standalone; the story itself has concluded wonderfully within this installment. Think of The Band as a trilogy of standalone novels. Eames himself has stated that although there’s something of an arc throughout the trilogy, each installment will be a standalone story starring a different Band. This means a new story with a new cast of characters in each book; maybe a new locale (there’s still so much left to explore in this world) as well. So yes, you should read this book as soon as you can.

Similar to one of the main themes of the book, a new generation of mercenary Bands will always try to outshine the old legendary Bands in their pursuit of glory; it seems like it will be tough for Eames to top his debut with its sequel, Bloody Rose. Let’s just say I can’t wait for him to prove me wrong.

Kings of the Wyld is a new addition to my ‘favorite debuts I’ve ever read in my life’ list. This list consists of The Name of the Wind by Patrick Rothfuss, The Lies of Locke Lamora by Scott Lynch, and Malice by John Gwynne. It was a splendid, fun, and full-hearted wyld (see what I did there?) reading experience. The fantasy genre has got a new voice, and that voice is singing gloriously. Just from reading this debut, I’m brave –and confident—enough to claim that Nicholas Eames is the next name to enter the big leagues in the fantasy genre.

Recommended? Hell fucking yes. To every fantasy fan, you should read this ASAP. In terms of debut or the first book of a series, it’s one of the best out there. Also, you have a very talented son, Terry!

Side note: The physical form of this book is damn gorgeous. Richard Anderson did an amazing job with the book cover. Here’s the proof. Trust me, it looks even better in real life. 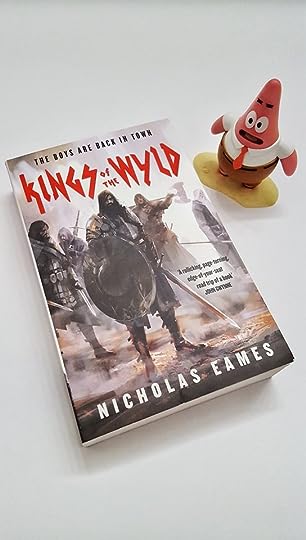 15 thoughts on “Book Review: Kings of the Wyld (The Band, #1) by Nicholas Eames”