Tower Lord by Anthony Ryan
My rating: 2.5 of 5 stars

On its own, Tower Lord is not a bad book. But as a sequel, it was disappointing.

The first time I finished reading Blood Song, it was in 2017. Since then, I honestly haven’t mustered the courage to continue past it due to the infamous negativity—I honestly never see the last installment of a series being called disappointing as often and widely as Raven’s Shadow trilogy—surrounding the sequels. I love Blood Song very much, I just finished rereading it a few weeks ago and I still think of it as one of the best fantasy debuts of all time; the idea that the sequels have the potential to ruin it scared me. Now that I have an ARC of The Wolf’s Call in my hand, I’ve decided to finally take the plunge and continue reading the series. If I ended up being disappointed by Queen of Fire, at least I know there’s a continuation after it that could—hopefully—bring the glory of Blood Song back. 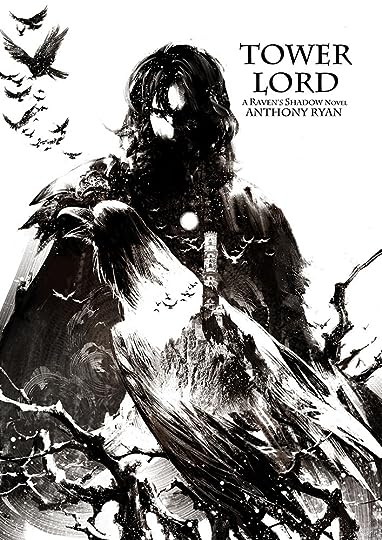 Tower Lord takes place roughly five years after the end of Blood Song. Vaelin is no longer the sole/central main character as the storytelling style has changed to multi-POV. This is usually a good decision; multi-POV narrative is my favorite storytelling style, especially in epic fantasy. However, introducing it in the sequel after the first book focuses its coming-of-age story on a single character, it means we have to accept that the MC—Vaelin, in this case—of the first book will have a chance to be on the backseat. If an author wants to take this direction, they must be able to make sure that the new leading characters have the strength to be as captivating as Vaelin’s POV in the first book. After all, readers continue reading the series because they want to know more about Vaelin’s journey.

Unfortunately, the multi-POV instead added many problems. The problem doesn’t lie within the multi-POV itself, but because Vaelin is now a side character that sounded completely different from the Vaelin we knew. Even being prepared for having less focus on Vaelin wasn’t enough to diminish my disappointment; reading Tower Lord feels like reading a book from a different series. Everything that’s great and distinctive about Blood Song is gone. Coming-of-age story? No more, though this one is understandable. Brotherhood? No more. The incredible strengths in characterizations? No more; every POV character sounded almost exactly the same with each other. There’s no clear distinction to their tone. I think if you haven’t read Blood Song and jump straight into this, you’ll still understand the majority of Tower Lord because the plot doesn’t really take what’s expertly built in the first book into account.

“It’s always the way with great men, they can’t see the knives of those who live in their shadow.”

Excluding the fact that for the new POV characters overshadowed Vaelin, the POV characters were almost never close to each other’s proximity; each of them has a different storyline that almost never converges at all. To me, it felt like reading four or five novellas in one novel. It’s really hard to care about the new characters; both main and side. When some characters cry or die, it never felt emotive because the nature of the storytelling style—even though it’s well written—has changed. Blood Song was able to evoke a poignant reaction from me just from Vaelin thinking “I want to stay.” This kind of moment was non-existent in this installment. The superbly written internal conflict and character development were almost gone. Plus, the pacing also felt off. The first half was okay but the second half was quite tedious; full of battle after battle revolving around characters that I couldn’t care about.

“If the stars in the sky are not fixed, then nothing is fixed. Nothing is eternal, all is temporary and ever-changing.” She turned away from the stars, meeting his gaze. “Nothing is fixed, my lord. No course is so set it cannot be changed.”

It’s not all disappointing of course, Ryan’s prose was wonderful. Other than Queen of Fire, I’ve read all of Ryan’s fantasy novels and I loved his prose in all of them. The change to multi-POV in Tower Lord helped in expanding the lore of the series and also the world-building geographically. Despite feeling disheartened by the lack of Vaelin, I found Lyrna and Frentis’s POV to be mostly great. Heck, I actually think that Frentis resembled Vaelin from the first book more than Vaelin himself in this installment.

Tower Lord isn’t as bad as my review might imply. As I mentioned in the beginning, if this weren’t the sequel to Blood Song, I would’ve rated it higher. I can’t help it, I loved Blood Song very much and I think this one differs and simply doesn’t live up to it. Overall, Tower Lord was a disappointment after the brilliance of Blood Song. I’ve heard more than hundreds of times from hundreds of readers—not an exaggeration—throughout the past two years that Queen of Fire is even worse. I will try to finish Queen of Fire, but if I failed, I’ll probably read a detailed summary of the book and jump to The Wolf’s Call immediately.