ARC provided by the publisher—Ace—in exchange for an honest review.

Holy Sister by Mark Lawrence
My rating: 4.5 of 5 stars

Holy Sister is an incredibly powerful and satisfying conclusion to one of the best trilogy I’ve ever read.

I won’t lie, a week ago I started rereading Red Sister mostly for the purpose of satisfying my completionist nature and eventually putting Book of the Ancestor into my “completed series I’ve read” list. However, the incredible of rereading Red Sister made me incoherently excited to continue with the series and here I am now. I have binged read and reviewed the entire series within a week, and I can say with confidence that this series has become one of my favorite coming-of-age fantasy series of all time.

“To sow knowing that you will not reap is an old kind of love, and love has always been the best key for unlocking the future.”

Holy Sister is the third and last book in Mark Lawrence’s Book of the Ancestor trilogy. The ice is closing, the Corridor is narrowing, and the empire is under siege from all direction; dangers are everywhere and Nona Grey will have to exceed her own maximum capability in the upcoming final battle. In my opinion, this is by far Mark Lawrence’s best series so far. I’m still amazed by how clever it all came together. We’ve always known that Abbess Glass is playing the long game since the first installment; it all came to fruition here. Just like Abbess Glass’s long game, we can only know what Lawrence’s saving for us by reading this outstanding installment to the end. The plot of the series is so cleverly planned and structured; connecting every single plot-thread all the way back to the prologue, interlude, and epilogue of Red Sister. Unlike Grey Sister, we’re back to having Nona as the sole POV to read here. The narrative is divided into two timelines:

The story starts up slowly and it was well-paced. From the beginning, the buildup of the tension escalated non-stop until the pulse-pounding conclusion. The usage of the two timelines—both from Nona’s perspectives—was smartly executed; it was never confusing and it felt crucial in enhancing the compelling nature of the novel. The book was deftly written, extremely well-polished, and the storytelling style felt like watching a pendulum that swings from left to right continuously in order to create a smooth flow of emotional impact. I mean it, the second half evoked a variety of emotions; laughter, sadness, anger, and tension were there; making the climax sequences gripping and utterly hard to put down. The carnage, the thrill of battle, the blood-soaked war, the brutal magic unleashed, and the clash of weaponry were vividly written; it truly felt like I was there with Nona and her friends.

“The fight matters. But in the end it is never truly won or lost, and victory lies in discovering that we are bigger than it is.”

Before I close my review, I would like to say that the greatness within this series was achievable due to how well-written the characters were; their developments throughout the series was astounding. Nona Grey has officially become one of the greatest heroines I’ve ever read in a fantasy novel. She’s flawed, loyal, kind, and simply inspiring as a person. The present may be full of darkness; familiar landscape changed by war. The future may be bleak, but she never gives up. Her friendship with her friends remains her beacon of hope and I loved every moment of reading her journey with her friends. By involving and developing every single character brilliantly, it honestly feels bittersweet to me to have read the conclusion of this series; I’m sad to say goodbye to these characters, but I’m glad to have read this trilogy. 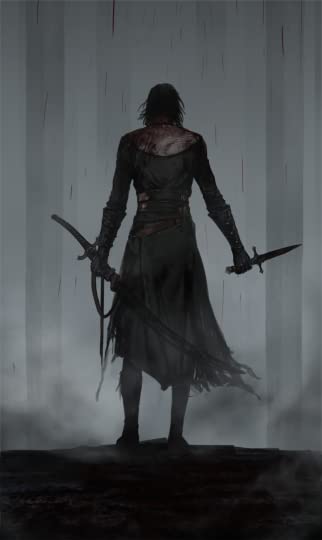 If you’re reading this review, rest assured that the best of parts of the book are purposely excluded from this review; you simply have to read and experience them for yourself. Mark Lawrence has outdone himself with the creation of Holy Sister. I have mixed feelings on Lawrence’s previous trilogy, I wouldn’t have thought that Book of the Ancestor would become one of the greatest trilogies I’ve ever read but here it is; suffice to say that I recommend this series with all my heart. That’s all from me.