A Game of Thrones by George R.R. Martin
My rating: 5 of 5 stars

Like countless readers around the world, I probably wouldn’t have known about A Song of Ice and Fire without its TV series adaptation, Game of Thrones. I’ve been following the TV series ever since the release of its first episode, I was completely captivated by the originality of the storyline and characters. Upon finishing the first season of the TV show, I immediately picked up this book and honestly? I DNF’ed it about a quarter into the book. It wasn’t that the book was bad, it was because the TV show—at least the first season—did a spectacular job of adapting the first installment of A Song of Ice and Fire. Something you have to know about me is that when my first entrance into a series is through a TV series/movies adaptation which I ended up loving, I tend to find the original material—usually novels—become super boring because I already know how it all will go down. It’s the biggest reason why I’m still not able to finish The Fellowship of the Ring. Unfortunately, it’s also the reason why I couldn’t finish this book back then. Now, years after my first try of reading A Game of Thrones, not only I was able to finish it, I loved it so much and I craved for more by the end of it.

“… a mind needs books as a sword needs a whetstone, if it is to keep its edge.”

Was there even anything new with the book once you have watched the first season? I wouldn’t say so. Other than the differences in character’s ages—The Starks and Daenerys ages in the book shocked me because they’re so much younger than the one portrayed in the TV show—and the fact that the book has more intricate world-building and history explained, story-wise almost everything else was the same. Just from the data and numbers that I saw so far, there are around fifty thousand reviews and almost two million ratings on this book, I doubt anything I say about it will be something new. I have watched all the TV shows and I pretty much know what the general plotline of the main series is all about, but I’ll keep this review strictly to the reasons that in my opinion makes this book and the first season of the TV shows reached its phenomenal fame.

Picture: A Game of Thrones by Marc Simonetti

“Bran thought about it. ‘Can a man still be brave if he’s afraid?’
‘That is the only time a man can be brave,’ his father told him.”

There’s a ridiculously powerful strength in the unpredictability of Martin’s storytelling; he doesn’t stick to the classic fantasy norm, what he wrote became the current fantasy norm instead. I’m serious, Martin pretty much shaped modern fantasy with A Song of Ice and Fire. Sure, the series wouldn’t have reached its worldwide praises and fame without HBO adaptation of the series, but now just look at the amount of inaccurate “if you love Game of Thrones you will love this” and “George R. R. Martin meets whoever.” blurb in the current fantasy market, they’re insanely many.

In my opinion, Martin brought a lot of something refreshing to the fantasy genre. Instead of writing a high fantasy that’s full of magic battles and magical creatures, he did the other way around and make it work. Instead of a battle of good versus evil, Martin wrote a realistically grim story where characters were morally flawed and the evilest beings in the world may truly be human after all; the good doesn’t always win, the bad could triumph. He explored this deeply and brilliantly within the dispute and politics over the Iron Throne, the seat of the Lord of the Seven Kingdoms. In the battle for the throne, no one is safe, not even the good and honorable ones; the good tend to suffer more actually. The sense of unpredictability sparked from Martin’s freedom in hurting and killing off his crucial main characters brought an intensity that can only be found in very few of my favorite fantasy series, and get this, a majority of them claimed Martin as one of their main inspirations. There’s this meme that got spread around in which the creator compared George R. R. Martin to Steven Erikson. Erikson himself has stated that he’s not competing with Martin with his fantasy, I have no idea how this became a meme in the first place. I’m talking about this picture: 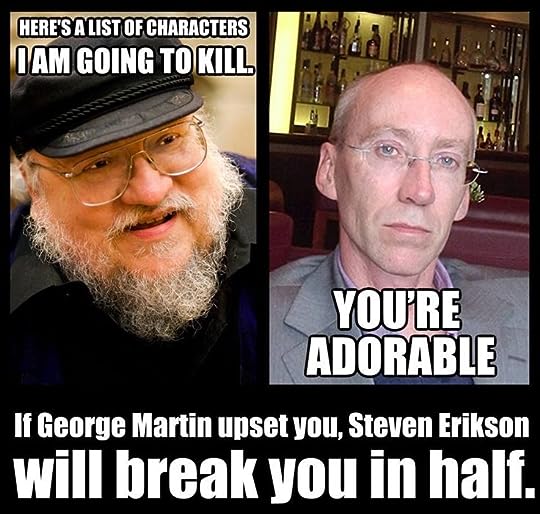 Now that I’m talking about this, I might as well say this once and for all, I heavily disagree with this meme. Don’t get me wrong, Malazan Book of the Fallen is one of my top favorite series of all time. However, the main strength of the series by far doesn’t lie in its character’s death. By book 5 of Malazan BotF, for spoiler reasons I can’t say, character’s deaths in BotF started to extremely decrease in impact for me. Erikson can kill anyone he wanted and I still wouldn’t bat an eye. Heck, sometimes I even eye-rolled when he killed off a character because I knew he had an obsession with this ‘plot device’ and I was proven right over and over again. I don’t think it’s a spoiler to say that Martin is a brutal author, he simply has no mercy towards any of his character and ANY of the character he decided to kill usually resulted in a massive and jaw-dropping impact that influence character’s decision and the progression of the storyline.

“What is honor compared to a woman’s love? What is duty against the feel of a newborn son in your arms . . . or the memory of a brother’s smile? Wind and words. Wind and words. We are only human, and the gods have fashioned us for love. That is our great glory, and our great tragedy.”

What exactly then that separates this book from the first season of the TV show? If you’ve watched the first season, is it still a requirement to read the first installment of A Song of Ice and Fire? I wouldn’t say that you’re required to do it, but you’re most likely going to enjoy it and get more out of it as I did. I’ve said it at the beginning of this review, I’m a very critical person when it comes to experiencing the original material of an adaptation I truly loved, but I was simply too immersed in this read and I thoroughly enjoyed every moment of reading it.

“Once you’ve accepted your flaws, no one can use them against you.”

Character’s thoughts and world-building were two factors which I think the TV show won’t be able to capture perfectly; they haven’t managed it, and I doubt they will be able to with only one season left. Every character in the book was truly well-developed and although each new chapter always follows a different character than its previous one, all of them were very compelling and important to read. I found reading the book brought a much better understanding of the characterizations than what the TV series did. It can’t be helped, this is one of the main benefits of reading a novel; we can read character’s thoughts, personalities, and motivations in much more detail than what TV show/movies can do. This is proven as Martin dived deep into the main character’s POV with amazing efficiency and effectiveness; fleshing out their personalities so damn well that every single dialogue feels like a dance of inspiring and memorable words. The world-building was also more intricate and easy to understand. A Song of Ice and Fire is a complex epic fantasy with multi-layered world-building; history upon history, character’s connections that sprawled everywhere. I mean it, if you’re not a fan of a massive fantasy world with a lot of histories, politics, and characters, you might want to prepare yourself before getting into this book.

“Never forget what you are, for surely the world will not. Make it your strength. Then it can never be your weakness. Armour yourself in it, and it will never be used to hurt you.”

Finishing the book, you’ll come to realize that the main story and chaos has only just begun. A Game of Thrones is an absolutely stunning prelude to an incomplete legendary series. I could’ve written two thousand extra words—I’m seriously holding myself back here, there’s still so much more I wanted to talk about—on this novel’s strenghts and what makes this book that special and important for modern fantasy genre, but I doubt I need to; practically everyone these days knows the existence of A Game of Thrones. That kind of world-wide fame speaks for itself already. I’ll conclude by saying that this was a totally magnificent start to an epic fantasy series and I recommend this book with all my heart to every epic fantasy reader. For the fan of the TV show, although it’s true that you can skip this installment if you’ve watched the first season, I still feel like it would be so much more beneficial for you to read this too. The intricacies in the characterizations and world-building can only be achieved by reading the book and nowhere else. I feel like I’ve gotten to know the characters and world more after reading this, and I’m incredibly excited to continue reading the series even when it’s still in an incomplete and most likely won’t ever be finished state. That’s how much I loved it.

Sidenote regarding the 20th anniversary illustrated edition:
The Illustrated edition is freaking gorgeous and its production value is really high, no doubt about that. However, I strongly recommend you to read this edition only if you have watched the first season of the TV series or you’re on your reread. If you’re a newcomer to the story, I suggest reading the text-only edition instead. This edition is gorgeous, each chapter begins with a black and white illustration done by highly praised artists in the industry; each art could’ve worked as a cover art due to its beauty and quality. But this is also where the main problem at. Most of the art appeared at the start of the chapter, which has a strong tendency of giving spoiler or at least hints of what’s to come in the particular chapter. Not to mention that a lot of the colored artworks are placed at the wrong page. An event happened in a chapter, the colored artwork of that scene could appear in the next or previous chapter, which doesn’t make any sense. Because of all these, I think it would be best if a complete newcomer to the series read the text-only edition.

Pictures: Two examples of Magali Villeneuve Illustrations for A Game of Thrones: 20th Anniversary The Illustrated Edition. Pictures are taken from her Twitter account and official website. 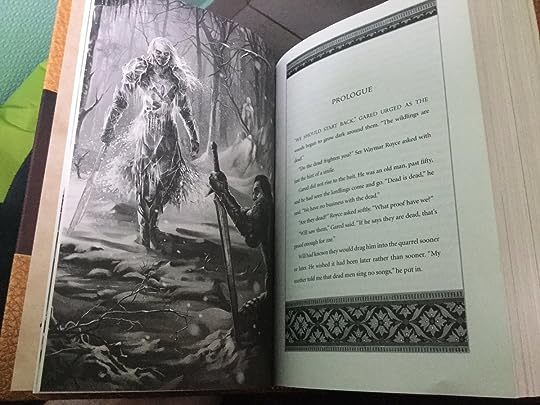 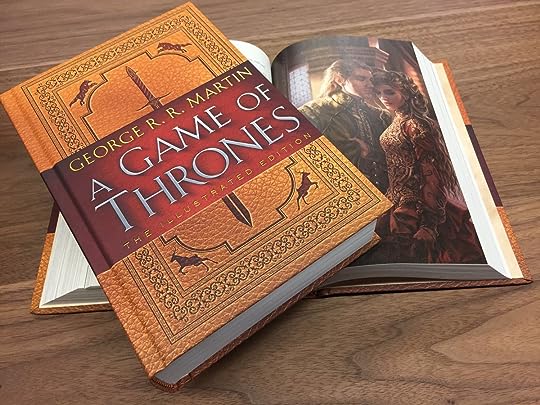