5 stars from start to finish for this exceptional Japanese-inspired military fantasy standalone. As of this moment, The Sword of Kaigen has become not only one of the four best self-published books I’ve ever read, but also my personal number one favorite self-published book.

This is one of those books where I just want to write “Please buy it and read it. It’s fucking amazing!” as my entire review. This book came out of nowhere and it totally stole my heart. If you’ve been following my reviewing progress, then you probably know that I like to keep and show my personal stats and facts on books I’ve read and reviewed. So here it goes. After The Mirror’s Truth by Michael R. Fletcher, We Ride the Storm by Devin Madson, and Never Die by Rob J. Hayes, The Sword of Kaigen by M.L. Wang is currently the fourth self-published book that I’ve rated with a full 5 stars. I honestly didn’t expect to love this book that much but I was madly engrossed by every page. Trust me, you’ll want to pre-order this book right now. I already did, it’s only $0.99 at the moment on Amazon for god sake! (More info on the amazing bonuses that come with the pre-order at the bottom of this review.)

The Sword of Kaigen is M.L. Wang’s first high fantasy book, a standalone companion prequel to her Theonite series, and this was absolutely incredible. It’s an Eastern Asian (mostly Japanese) inspired military fantasy and I loved this book deeply from cover to cover. The official blurb on Goodreads and Amazon did a great job explaining the premise of the book without spoiling anything, so please feel free to check there if you want to know more. Let’s begin with what I loved about this book. I’ll start by saying that I seriously flipped (or swiped) through this book insanely fast. The Sword of Kaigen is brimming with seductive pacing and it was truly unputdownable. Every moment I wasn’t reading it, I couldn’t stop thinking about what would happen next. From deadly propaganda, to non-stop escalating tensions, to superb character developments, Wang did a fantastic job in making sure that every chapter has something important happening. No pages were wasted; the book was utterly tension-packed and contained a very endearing cast.

“A life of dangerous adventures might seem worth it now, when you are young and seemingly invincible, but one day, you will have children, and you will not want that life for them.”

I’m serious here. I’ve said countless times before that I prioritize characterizations over everything, and a crystal clear talent for characterizations was displayed from the first chapter. The two main characters, Mamoru and Misaki, were extremely well-written; but what amazed me further was how in-depth the characterizations were for EVERY character in this book. The characters were flawed, and none of them stayed the same as they were at the beginning of the story. 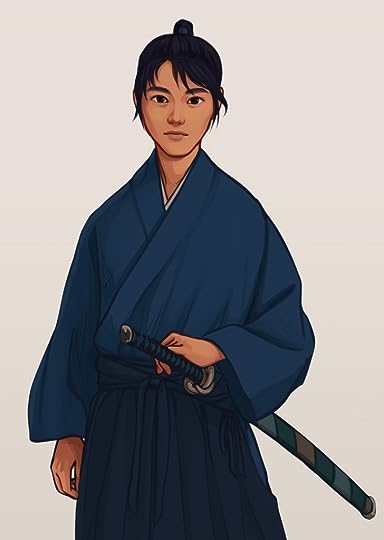 Mamoru’s development in the face of the harsh revelation regarding everything he believed was astounding. Reading about his growth, struggle, and determination in living up to his name (Mamoru is Japanese for ‘protect’) was something I immensely enjoyed. But as much as I loved Mamoru, I have to give my biggest praises to Wang on her stunning achievement in writing Misaki. 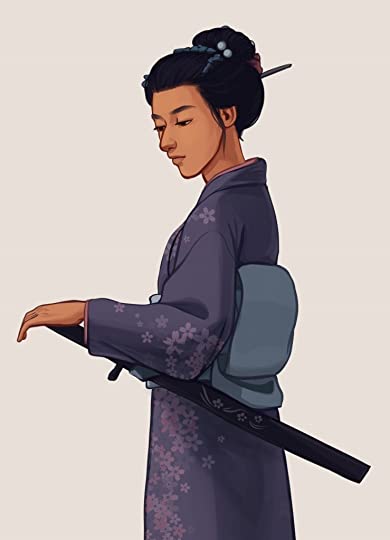 The natural and gradual development in her characterization and relationship with her family compelled me to be heavily invested in her storyline. She has become one of my favorite heroines in fantasy and I was also thoroughly impressed by the awesome and wholesome female friendship nurtured in this book. The characters in this novel taught me the meaning of facing hardships together, and how crucial family, friendship, love, adulthood, and parenthood are in the face of disaster. These and the terror of war were the main themes of the book and they were expertly delivered to the reader with finesse.

“I’ve never needed a sword to protect you—to raise you the way your father wanted. Caring for my family meant putting away the fighter, so I did.”

The world-building was intricately crafted; the clothing, honorifics, attitudes, older Japanese customs, and the languages used were all spot-on. I found the world-building and setting to be quite unique. It’s more like an alternate Earth that’s imbued with high fantasy elements than a totally new world. Planes and technologies were in the book, the languages that the characters used were literally Japanese and Mandarin in our world. I may be wrong here, but the name of the Planet, Duna, may have come from the Indonesian word for ‘planet’: Dunia. This book also serves really well as a rival to The Poppy War with a bit of the foundation of the world-building done from the opposite side. In The Poppy War, the Nikara Empire (Chinese) was invaded by the Federation of Mugen (Japanese) and the main character there employed fire magic. In The Sword of Kaigen, the Kaigenese Empire (Japanese) was invaded by the Ranganese (Chinese) and the main character here used water/ice magic. As a Chinese person who devours Japanese culture and media on a daily basis, I’m totally satisfied by the evident amount of research Wang has done for her world-building, and I thank her for it.

To say that this book was thrilling is an understatement. I’m not joking. The Sword of Kaigen is one of the most intense books I’ve ever read. I gritted my teeth, I clenched my fist, and I was constantly breathless. Wang knows how to write catastrophic elemental magic and implement extraordinary heart-hammering scenes very effectively. If you love The Poppy War, shonen anime/manga, or elemental magic battles—Avatar: The Last Airbender for example—you seriously have to read this book. Ice magic, wind magic, blood manipulation, and terrific duels; without writing skills of a certain caliber, the battles in this book could’ve been really frantic and too hard to follow. However, that wasn’t the case with this novel because Wang’s prose was easy and delightful to read. Her prose may not be poetic but it is vivid, simple, and flows without any obstruction.

Honestly, sometimes it even felt like I was reading Brandon Sanderson’s magical battles and that’s pretty much one of the biggest praises I can ever give to any high fantasy author. Wang provided not only one but two climax sequences in The Sword of Kaigen; the first one began at approximately 35% and the second one at 75% mark of the book. I can say with temerity that both of them were stupendous in quality. Showing the raw and violent power of the magic systems, the calamity that appeared when the bloodline of the gods clashed was bloody destructive. I need to also mention that the book features one of the most memorable duels I’ve ever read in a fantasy novel. Not only was the duel itself magnificent in execution, but it was also so emotionally impactful that it formed unforgettably vivid images in my head. The Sword of Kaigen is a war story, a brutally pulse-pounding one. The great characterizations enhanced the sense of danger and impending loss the characters felt during and after the war. Bad things happened to good people and you WILL feel their palpable pain and tragedy. The piercing blade of ice will stab at your empathy, white snow will turn crimson, the summoning of the Whispering Blade will break your heart, and you will beg for more because you won’t able to stop reading the book until you’ve reached the satisfying conclusion.

“But if I learned one thing from Firebird, it’s that a person’s tragedy doesn’t define them or cancel all the good in their life.”

The Sword of Kaigen is an excellent Japanese-inspired military fantasy in all its glory. Written with words sharpened to fatal edges that cuts straight to the heart with merciless precision; full of colossal frigid blasts that freeze its suspenseful familial drama and outstanding action scenes into the reader’s memory; emotionally demonstrating the terrifying truth of the atrocity of a devastating war that left incurable scars to the fictional characters who have become real to me. All of these components combined to make this book my first 5—and 6—stars read of the year. I’m only five days into January at the time of writing this review and I already know that this superlative book will not only be in my ‘best books of the year’ list by the end of the year, but will also be listed as one of the best books I’ve ever read. In my list of brilliant and favorite self-published books, The Sword of Kaigen stands tall at the top of the mountain and I honestly have no idea when or if another self-published novel will steal its rightful spot. Without any shred of doubt, this was a phenomenal read and I will recommend this glistening jewel of a novel to every adult fantasy reader from now on. If you’re a fan of The Poppy War, read it. If you’re a fan of military fantasy, read it. If you’re a fan of high fantasy, read it!

This pre-order currently is priced at $0.99 and ALL entrants (worldwide) who pre-order will receive cool bonus swag. Details here: https://www.goodreads.com/author_blog…

You can pre-order the book from: Amazon US | Amazon UK | Book Depository (Free shipping)

18 thoughts on “The Sword of Kaigen (A Theonite War Story)”