These are the dominant themes presiding over Midnight Tides, the excellent fifth chapter of Malazan Book of the Fallen, which opened with a Prologue dated back to the Time of the Elder Gods, providing yet another history lesson into this deeply complex world.

One would expect that progressing through the series should only get easier right? It seems though that Erikson decided to up the ante for worldbuilding by bringing the reader to a completely new far-flung continent and an entire cast of new characters. There is only ONE name that is familiar in the Dramatis Personae, one whom we met in the previous book – Trull Sengar. It turns out that Midnight Tides was dedicated to relate the story of how Trull ended up being in his dire position as we’ve seen in the Prologue of House of Chains. END_OF_DOCUMENT_TOKEN_TO_BE_REPLACED

Retribution is at hand for the rise of the Seven Cities rebellion as the new Adjunct to the Empress arrives to lead the Malazan army to face Sha’ik and her Army of the Apocalypse. The Holy Desert of Raraku continues to emanate despair, even more so now than ever after the Chain of Dogs left in its trails the miasma of vengeance and grief. END_OF_DOCUMENT_TOKEN_TO_BE_REPLACED

Memories of Ice by Steven Erikson

The harder the world, the fiercer the honour.

This in-world quote succinctly explained why Memories of Ice is one of my favourite volumes of my favourite grimdark epic fantasy series.  It is the reason why I even read grimdark in the first place, given that I am so easily assailed by emotions that one wonders why I willingly put myself through such heartbreak. So bear with me throughout this series when I keep waxing lyrical about how humanity manifests its most awe-inspiring qualities in the face of relentless hardship and horrors of a world ravaged by conflict.
END_OF_DOCUMENT_TOKEN_TO_BE_REPLACED

The events at the end of Gardens of the Moon saw the Bridgeburners splitting up, with the bulk of squad remaining on Genabackis with Dujek Onearm and Whiskeyjack to face the threat of the Pannion Domin. Meanwhile Fiddler and Kalam headed off to Seven Cities, where the Bridgeburners were forged, and which is on the brink of rebellion as the Seventh Year of Dryjhna, the Apocalypse, approaches. When the Book of Dryjhna is delivered into the hands of the Sha’ik, the spirit of the goddess will embody this prophetess and the Whirlwind together with the rebellion will rise.
END_OF_DOCUMENT_TOKEN_TO_BE_REPLACED

END_OF_DOCUMENT_TOKEN_TO_BE_REPLACED

Time really flies huh? Another year is coming to an end soon! This year I’ve read and reviewed 129 books. It’s been another fantastic reading year. Considering the high amount of 4.5 and 5 stars books I’ve rated this year, I’ll even say that this year miraculously ended up being my best reading year so far. There will be four rules I set in this list in order for me to give appreciation to more authors rather than having only a few authors hoarding this list.

All the books listed below received a rating of 4.5 or 5 out of 5 stars from me. Without further ado, here are the top 20 books I’ve read in 2018! (All full reviews of these books can be found on my Goodreads page; some are already available on this blog.)

The Crippled God by Steven Erikson
My rating: 5 of 5 stars

Epic, masterful, and scintillating in every sense of these words; The Crippled God is an unforgettable magnum opus that concludes Steven Erikson’s genre-defining series: Malazan Book of the Fallen.

11,216 pages (Bantam paperback edition) and 3.3 million words read in exactly two months and two weeks; I’m done, it’s finally over. The entire ten-volume of Malazan Book of the Fallen has been in my TBR pile for almost two years long, and now it has been read, dusted and shelved. Erikson has raised the benchmark for Epic/military fantasy ridiculously high with what he created in this series. Together with Wrath by John Gwynne and Assassin’s Fate by Robin Hobb, The Crippled God stands among the top of the best final book of a series I’ve ever read, and there’s a definite probability that it will always stay on that list.

“I have enjoyed our long conversation. What’s three and a half million words between friends?” – Steven Erikson

END_OF_DOCUMENT_TOKEN_TO_BE_REPLACED

Dust of Dreams by Steven Erikson
My rating: 2 of 5 stars

Dust of Dreams lived up to its name, the book sent me to dreamland almost every chapter.

Erikson mentioned at the beginning of the novel that his idea of a finale was so huge that the story had to be done in two books: Dust of Dreams for the first half and The Crippled God for the second half of the story. I haven’t read The Crippled God yet and because of that, I simply have no idea how all the plotlines will converge and concludes in the last entry of the series. However, I’m going to say this, Dust of Dreams to me is easily the weakest book within the entire series, even weaker than House of Chains. If it weren’t due to the fact that marks the ninth and penultimate installment of the series, I would’ve DNFed the book/series; it was that painful and boring to read. END_OF_DOCUMENT_TOKEN_TO_BE_REPLACED 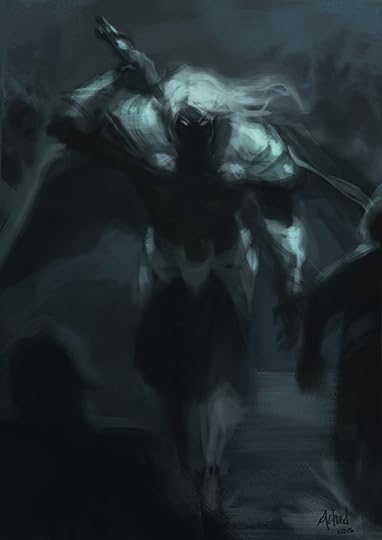 END_OF_DOCUMENT_TOKEN_TO_BE_REPLACED

By this point of the series, I think it’s safe to say now that Malazan Book of the Fallen will never break my heart the way it did a lot of readers. People always told me that Erikson was more brutal towards his characters more than George R. R. Martin or all the conclusion of his books will leave my soul crushed; I strongly disagree with these as I found none of the books in the series so far to ever move me to the point of making my soul crushed or on the brink of tears. This series is amazing in many other aspects but for characterizations (which is the most important aspect of any story for me), in my opinion there are several authors who did it better. END_OF_DOCUMENT_TOKEN_TO_BE_REPLACED