The Bonehunters by Steven Erikson
My rating: 5 of 5 stars

Brilliant is an understatement, The Bonehunters is a leviathan of a masterpiece in convergence.

With this installment, Steven Erikson has cemented himself as an irreplaceable author for the genre of epic and military fantasy. This is the already the sixth book in the series and it’s simply unbelievable how he was able to keep producing such an amazing book. I thought Memories of Ice would end up being the absolute best installment of the series but as it turns out, The Bonehunters ended up being another best of the series so far; it’s truly up to the masterpiece quality of Memories of Ice and I can’t decide which one I loved more between the two. Let’s just say I’m honestly shocked by how incredible this installment was. It took six books of the series but I’m extremely confident about putting Erikson into my list of favorite authors of all time now.

It’s really difficult to review this book. Not only this installment is filled with enough content to fit an entire trilogy, The Bonehunters marks the first time Erikson converged almost all the plotlines, characters, and world-building within his previous five books into one. To save future readers who read this review from spoilers, I’m going to refrain from mentioning any characters’ name from now on and just explain what I loved about the book. The story of the book started after the end of House of Chains, which is approximately seven months after the epilogue in Memories of Ice. This was a story that revolved heavily around humanity, leadership, loyalty, companionship, life and death; and of course, gods, religion, and fanaticism.

“All those bickering worshippers, each one convinced their version is the right one. Imagine getting prayers from ten million believers, not one of them believing the same thing as the one kneeling beside him or her. Imagine all those Holy Books, not one of them agreeing on anything, yet all of them purporting to be the word of that one god. Imagine two armies annihilating each other, both in that god’s name. Who wouldn’t be driven mad by that?”

One of the main reason why this book stands out from all the other book in the series so far was due to one thing: pacing. Pacing-wise, it’s even better than Memories of Ice; I enjoyed reading literally every page of this tome. The previous installments, as amazing as they were, always had one or two plot lines that bored me; the Barghast subplot in Memories of Ice or the barrage of dream sequences in Midnight Tides to name a few. But in this book? None; there’s simply no dull moment here. Excluding Erikson’s improvement in writing skill and the converging of plotlines, the extraordinarily enjoyable pacing was achieved because unlike the previous five books, Erikson only introduced relatively few new characters in an already familiar settings here; the majority of the POV characters were someone we have known and accustomed with, in places we have been, like The Seven Cities and Malaz City (Not in BotF, but in Night of Knives). The flow of the book was never hindered; the balance between actions, dialogues, and philosophies culminate to bring the compelling ability of the book to a new height for the series.

I am simply in awe of the sheer characters’ development that engulfed this book. There was one character I really disliked but here I finally changed my mind. Plus, seeing all the world-building sprawled in the previous installments started to converge in one book was one heck of a rewarding experience. Erikson’s capability in constructing the scenes within each chapter while at the same time preparing the awesome setup for the next chapter was simply masterful; every page, every sentence, and every word, all of them have tremendous value in progressing the story, characters’ development, and world-building. However, the grand scope of the action sequences in this book in my opinion deserved an extra standing ovation.

Chapter seven of this book was roughly 120 pages long, that’s a size of a novella in a single chapter; for the majority of other epic fantasy series, what happened in this chapter alone could well be the conclusion their respective trilogy or series. However, instead of just one incredible action sequences in one chapter, Erikson gave another 100 pages long action sequence in the climax sequence of the book. In this climax sequences, Erikson displayed his superb improvement in writing close quarter combat scenes. The atmosphere, the precision accuracy in prose, the depiction and description of the military tactics and assassinations that shows the battle of cunning and wills were absolutely top-notch.

Erikson imbued the themes of this book into the brilliantly destructive action scenes. Once again, the power of sorcery in this series never ceases to impress me; they’re capable of shaking my heart as if there was really a trembling blast near my surroundings. Erikson painted an escapism experience of the highest level that can only be born from the imagination of the master of the genre. A cloud of darkness and death gathered; humanity must rise against god’s machinations once again. Giants, undead, and the descending gods, glory and despair battled for supremacy. With the addition of the berserkers in fanaticism and the searing firestorm that cloaked its victim in flame and boiling blood; all of these demonstrated a festival of destruction that humanity, gods, and fanaticism can bring and also at the same time, displayed a celebration of perseverance that made me shook my head in penitence and awe.

Picture: One of the interior artwork in the Subterranean edition by Noah Bradley 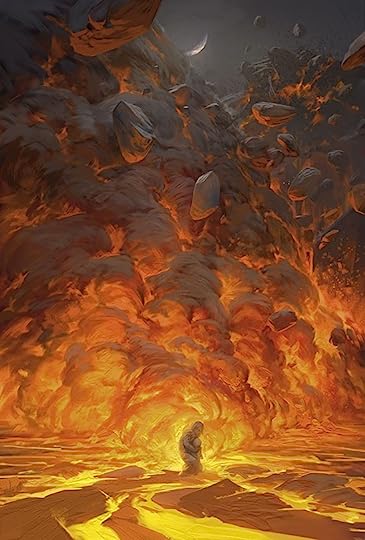 Erikson’s prose provides readers with visceral and vivid imagery; portraying savagery and brutality while making sure that they evoked meaning to the scenes, not just shock value. Horizon painted with smokes, palpable emotions and atmosphere; Erikson is a genius and he was able to inflict a massive amount of impact just by putting one short closing sentence in his chapters such as

“The sun, rising to meet its own child.”

I don’t know how Erikson will be able to top this book with the remaining four books of the series; this is epic fantasy at its best and shows why I absolutely love the genre. The Bonehunters without a doubt was another one of those incredibly rare 6 out of 5 stars read. Reading the sixth book in the Malazan Book of the Fallen was truly a magnificent experience and just like Memories of Ice, it’s with temerity that I claim that The Bonehunters deserves to be included into one of the top ten novels I’ve ever read.