Series: The Legends of the First Empire (Book #6 of 6)

Age of Empyre provided a relatively satisfying ending to the series, but the series never reached the height of The Riyria books.

“That’s what stories are for, Brin realized. They are magic that aid people in times like this. They provide hope, a light to see by when all others are snuffed out.”

With Age of Empyre read, it is official that I have finished reading Legends of the First Empire. That’s right; out of Michael J. Sullivan’s bibliography, I have only The Rise and Fall trilogy left to read, and I shall do that in 2023. But for now, let me say that Age of Empyre had a lot of high expectations to live up to. I approached this with the mindset that the ending of this series would be as unforgettable as Percepliquis, the final volume inThe Riyria Revelations. That’s probably too high of a pedestal to reach, so some faults definitely lie with me. But at the very least, I was hoping for Age of Empyre to be as good as Age of War, the third installment in Legends of the First Empire that concluded the first half of the series. But although I, overall, had a great time reading this sixth and final volume of the series, I’m admittedly both satisfied and quite disappointed with some storytelling decisions that happened.

“Although the youthful benefited from drive, ambition, and an unwavering faith in their ideals, having those tools wasn’t enough. Experience was an essential missing ingredient. The young hadn’t seen enough to understand how the world worked. They took everything at face value because that was the entirety of their reality, and that limitation locked the door to alternative possibilities.”

Let’s start with the good parts first, shall we? There weren’t any dull moments in Age of Empyre. Unlike Age of Death, the narrative in Age of Empyre proceeded at an engaging pace, and I never felt like there were any filler moments. The themes of trust, forgiveness, and redemption shine brilliantly once more, and as I said before, this shouldn’t come as a surprise to those who’ve read and loved The Riyria Revelations already. And personally speaking, I found the themes written magnificently. They may not be as satisfying or explosive as The Riyria Revelations, but many scenes in this book moved me emotionally. I felt attached and invested with the characters, and seeing them suffer or try their best in everything tugged at my heartstrings. However, I can certainly understand how these themes can feel overdone by this volume due to the frequency of their discussions in the last three books of the series. Although I did not mind them, these topics and themes have been heavily hammered into the reader’s mind for the past three books, especially in Age of Death and Age of Empyre where the plot progression was directly influenced by them.

“Because I hope that no one is beyond redemption, and anyone can correct the misdeeds of their past… I believe this to be true. I have to.”

The criticism is understandable. But I think these themes have always been one of the things I loved most about Sullivan’s books. Whether it’s for The Riyria books or The Legends of the First Empire, these books dealing with classic fantasy world-building written in a modern voice are always a good refresher when you need a break from reading grimdark fantasy novels. I always say this as a grimdark fantasy enthusiast myself, grim or gritty content isn’t the only sure way to keep the narrative engaging. Far from it, really. The entirety of Age of Empyre can be described as a race against time. Without going into spoiler-territory, everything relies on multiple characters in different locations around the world arriving and executing the correct action at their destination at the right time. The pacing and action in Age of Empyre were handled with finesse, and there were many other elements Sullivan implemented that worked with me. I can’t discuss them in detail here. But just an example, seeing the scene depicted in the gorgeous cover art of this novel felt so satisfying and iconic. This and many moments in the series are something you have to read for yourself. 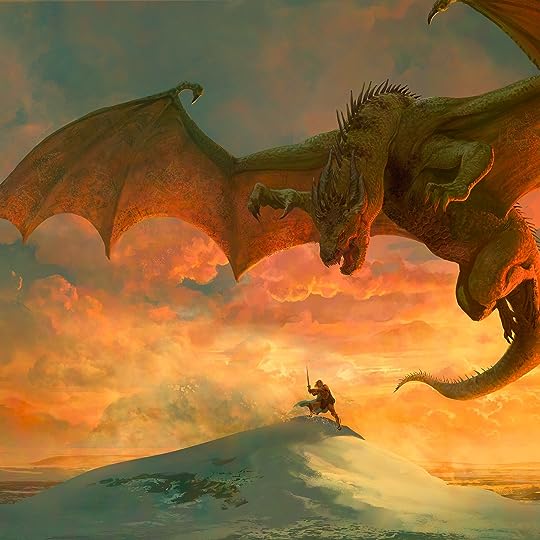 Before we get to discussing the things in Age of Empyre that did not work for me, I would like to talk about one more crucial strength of this book and series that enhanced my experience of the entire series. I talked about this before, multiple times, but I can’t emphasize just how important it is to read The Riyria Revelations first. Look here, when an author says something like “this series is completely separate from that other series and you can start from here,” as Sullivan did with this and The Riyria books, it’s always advisable to take this advice with a grain of salt. This is not an attack against the author or anyone. I totally get that they’re selling their books, and it is true this series can be enjoyed without reading The Riyria books first, and I’m sure many readers did enjoy this series without doing it. But for me, and from my experience with other series in the same boat, I tend to find if there are two or more series in the same universe, it’s always best to read them in publication order. And as proven, I can’t imagine I would enjoy reading series and novels as much without doing that first. Plus, some of the events here actually heavily spoiled the identity of a character in The Riyria books, just like how reading The Riyria books first spoiled the identity of this particular character here. But that’s the thing, they’re not separated from each other. There was an immensely satisfying (and obvious) nod to one of the duo of Riyria at the ending of Age of Empyre, and that part and many more would lose their impact without reading The Riyria books first. So long story short, my advice: read The Riyria books first to fully enjoy this book and series. At the very least, read The Riyria Revelations first.

“The worst thing people can do to one another is also the best—provide challenges. How we respond becomes our lives. How we live our lives becomes the best and the worst parts of our afterlives.— THE BOOK OF BRIN”

There was a myriad of scenes that Sullivan did right. Unfortunately, plenty of storytelling decisions stopped me from rating this book higher. Before I got to the ending of Age of Empyre, I was confident it would become my favorite installment in the series. Alas, it did not happen. And I cannot believe I am saying this for a concluding volume by Sullivan. Even though the overall reading experience of Age of Empyre proved to be satisfying, many of the characters here felt like they did not receive a proper closure. Intentionally, too. There I said it. I can voice many examples of this, but I will mention only one: Brin. Brin is one of the main characters, maybe even the true main character of the series. Her characterizations and the role she played in the last three books were some of the key driving forces of the narrative. But after everything that happened, it is just unbelievable to me that the supposed final chapter between her and Tesh was taken out of the book simply because we readers would know what would happen already.

“I discovered that age isn’t measured in years, but rather by the roads we travel. Steep paths build muscles, know-how, and empathy, an easy one, only indifference.”

At the acknowledgment, Robin mentioned there was no point for Brin to have a final closing scene after her penned final chapter here, and well, I intensely disagree with this decision. It is not about treading old ground, but it’s about READING the scene that will give us satisfaction and closure. Following the logic used, if it’s true because we know what would happen instantly mean we do not need to see/read the scene anymore, then why even bother reading other hundreds, probably thousands, fantasy books in the market now. Once readers are well-versed in the genre, it is not difficult to predict key points and world-building in many books of the same genre. The fact that many readers pointed this issue out during the beta-reading process should say enough already. And I have to give my resounding opinion. This is only ONE example. I have no idea whether Sullivan has prepared the explanation of what happened next in The Rise and Fall trilogy. However, right now, Malcolm’s satisfying final chapters aside, all the other characters felt like they were missing one or two chapters for a truly satisfying ending. It’s just such a shame to me. All the underworld sections felt too long for the series’ own good, and we did not even get more exposure on scenes that would have mattered more. Sullivan packed so many, maybe too many, ideas into these last three books, and the series does not feel as well-organized and cohesive as his story usually did. Parts that should have been shorter were being drawn out longer, and other scenes that needed more exposition (one of the examples being the one I stated in the above paragraph) were purposefully removed or shortened.

“Life is full of risk, Nolyn, but you should never let that hold you back. You can’t let fear stop you from living. Just make certain the chances you take are worth the risk.”

It is worth mentioning, despite my issues with Age of Death and Age of Empyre, I never felt disengaged from reading the series. My disappointments stemmed from how much I loved The Riyria books. The Riyria Revelations is exemplary in how to write a powerful and satisfying ending that ties every element and foreshadowing established in each previous book. Age of Empyre did deliver a relatively satisfying concluding volume, but as I said, it is far from reaching the height of The Riyria books. I am still excited to read The Rise and Fall trilogy, though. I’ve heard The Rise and Fall trilogy will return to Sullivan’s standard storytelling structure. Meaning it will be a series of standalone books just like what he did in The Riyria Chronicles and, in a way, The Riyria Revelations as well, excepting the last omnibus. I found Sullivan a much better writer and storyteller when he crafted a series of connecting standalone/self-contained books. Better than having them continue non-stop from one cliffhanger to the next installment as he did in the last three books in the Legends of the First Empire. Anyway, overall, this is still a good fantasy series about unlikely and ordinary heroes doing the best they can. I look forward to reading Nolyn, Farilane, and Esrahaddon in 2023!

“The stories I write might be fantasy, but the depiction of the feelings people share for each other is real. The unlikely heroes, some who we never see or hear about, are as well. They are out among us right now, risking their lives and those of their loved ones. They are sacrificing all they have to help save the world. If you take anything away from this story beyond distracting entertainment, consider remembering this Book of Brin quote: I had always worshiped heroes in stories. I had no idea I was surrounded by them.”

Legends of the First Empire: 25/30 stars