Series: The Legends of the First Empire (Book #3 of 6)

Age of War is the best of the series so far. And it is also among Sullivan’s list of best novels.

“If there is one thing I have learned, it is that people will astound you. But the moment they do, or shortly after, you will realize you should not have been surprised. Ultimately, the problem was you, not them.”

Maybe the problem lies in me, indeed, but despite my enjoyment of the previous two books in The Legends of the First Empire, Age of Myth and Age of Swords, I honestly never felt fully in love with the series. Fortunately, that is no longer the case. After I finished Age of War, the third volume and the halfway point of the series, I can undoubtedly say I am immensely invested in the series now. And I’m keeping my fingers crossed that the second half of The Legends of the First Empire will convince me to put the series on my list of favorite series. For now, I will say this, Age of War astounded me on many levels. It has the potential to become the best of the entire series, and it is one of Sullivan’s best works. But thinking about it, it shouldn’t have surprised me that I would love Age of War. Sullivan has mentioned Age of War works, in a way, as a concluding installment; it concluded the first half of the series. And if you’ve read The Riyria Revelations, then you will know just how damn good Sullivan is at writing a concluding volume. Even if that “concluding” volume isn’t technically the last volume of the series.

Age of War continues from where Age of Swords left off. And as the title implies, even if you haven’t started reading the series yet, I think you will know instantly that this novel, unlike the previous two books, will be a novel that revolves heavily around a war. If you take a look at the gorgeous cover art of Age of War, illustrated by Marc Simonetti, you will also realize that the time of the climactic confrontations between the humans and elves teased since Age of Myth is finally here. And it is not an exaggeration to say that I had a blast reading every page of Age of War. It is emotional, filled with many iconic scenes, and it tackles the themes of leadership, love, responsibilities, sacrifices, and war incredibly well. More importantly, as the third volume of a six books series, the overall quality of Age of War exceeded my expectations in every possible way. 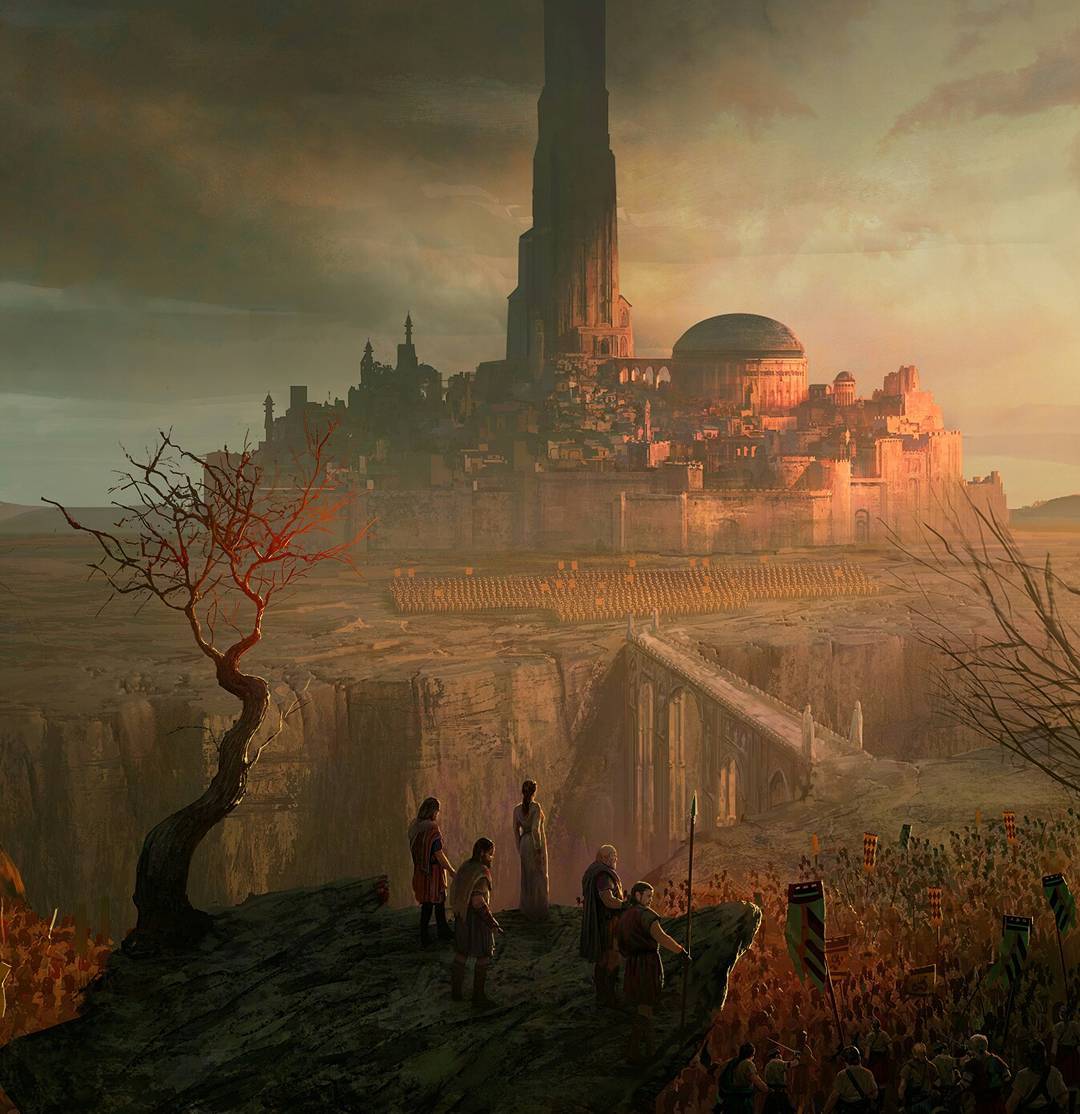 “Death is inescapable. Everyone spends their days, buying unrealized dreams. I gambled mine on hope, not for myself, but for all those who would follow.”

I’ve mentioned many times that Sullivan is one of the best authors at writing believable women with great characterizations in the fantasy genre. He has proven this in The Riyria Revelations, and he has proven this as well in The Legends of the First Empire so far. But even then, I’ve also mentioned that one of my issues with Age of Swords was how unbalanced the characterizations for the male and female characters were. To put it simply, before Age of War, almost all the men in the series, especially Raithe, were either unlikeable or forgettable. And I’m not saying that in a good way at all. Other than Gifford, Malcolm, and Tesh, I don’t think there were any intriguing male characters in the series. Age of War changed this. It handled the balance of developing ALL the main characters magnificently. Persephone, Suri, Arion, Roan, and many more women in the series have received much focus, and I’m pleased with that. But I’m also delighted to see the men in the series transformed into memorable and well-developed characters in Age of War.

“I truly believe that hardship makes better people. Pain—assuming that it does not break us—provides the strength of knowing that such things can be endured and overcome. And I know of no one who suffered more than Gifford.—THE BOOK OF BRIN”

Among many things to do with the characters, I loved reading about Raithe’s and Suri’s friendship in Age of War. Gifford was admirable as a character, and Tesh was insanely likable. I disliked Persephone’s treatment of Raithe in this book, but I still understood her reasons. Everything is fruitful to the narrative. Whether I agree or not with the character’s actions, there were so many things Sullivan did right with the characters and the spotlight given to them in Age of War, definitely much better than the ones showcased in the previous two books. Remember, I was one of the readers disappointed with Raithe’s development in the series. There was nothing special about him, and he was supposed to be one of the main characters! Here, I loved his character’s arc. However, if you ask me who are my favorite characters in the series, I will instantly choose Tesh, Malcolm, Suri, and Gifford. I wish I could tell you the details of the events and their actions in Age of War, all the badass moments, and the hardships they endured, but this is something you have to read and find out for yourself. Instead, I will say this. There were two things I loved most about reading Age of War, and one of them can be surmised as every scene involving Tesh, Malcolm, Suri, and Gifford. The other one? The entirety of the second half of Age of War.

“Most of the time people just lack confidence. Doubt kills any chance they might have. People believe magic is impossible, and so it is because they refuse to try, or if they do try it’s only half-hearted because they know—deep down, they know—they can’t. Sometimes all a person of talent needs is a little encouragement and someone—sometimes anyone—believing in them. Avalanches have been caused by the tossing of a pebble, and miracles have come from wishful thinking that just happened to spill out in words.”

I totally did not expect this. I know Sullivan is awesome at plotting, characterizations, and delivering satisfying storylines. However, if there’s one thing about Age of War that completely took me by surprise, and I’ve read every book in The Riyria Revelations twice and The Riyria Chronicles, it was how well-written the action scenes were. Age of War has amazing war scenes and set pieces. The entire second half of Age of War was an all-out war with relatively brief moments of respite, and even though I consider Sullivan one of my favorite authors, I never thought of him as an action-scene writer. But with the devastations, tactics, momentum building, and the rewarding character’s arc incorporated into the war sequence in Age of War, I am happy to say I was wrong. In Age of War, Sullivan once again exhibited why he is one of the masters in writing conclusions. I seriously did not expect Sullivan could pull off something like this. Intensity, vivid scenes, fist-pumping and heartbreaking moments were not missing from the big war scenes—with engaging twists and turns—in Age of War. It was impressive and immersive, and it made me excited to read the next three books in the series even more than before.

“The Battle of Grandford is remembered in song and story; a legend of mythic heroes and villains, an allegory of truth and courage; a rallying cry for a people. It is important to know that the Battle of Grandford got its name and reputation months after the fighting ended, bestowed by people who were not there.”

“Getting older, Mawyndulë, is like climbing a mountain. The higher you go, the greater the view. From time to time, you look back. At such heights, you can see paths behind you: the trails you took and the ones you foolishly disregarded; the blind alleys you fortunately missed, purely out of chance rather than by some greater wisdom on your part. You also spot others following you, people making the same stupid decisions. From your elevated position, you witness their bad choices, the ones they can’t see because they aren’t standing where you are. You could shout down, attempt to warn them, but they rarely listen. They are too blinded by the indisputable fact that the path you followed got you where you are, to the place they want to be.”

Age of War is easily my favorite installment of the series so far, and I am unsure whether any books in the rest of the series can top it. Age of War tells a compelling story of unlikely heroes participating in a devastating war. The first half can be surmised as the calm before the storm, but the second half of the volume was embedded with action sequences, sacrifices, and battles against overwhelming odds. But as Brin said, heroes are those who refuse to create or become victims. Not exclusively in this book or series, but I think we, in our world, also live among heroes. I loved Age of War, and I look forward to reading Age of Legends soon. I sincerely hope the second half (or the final book) of the series will be able to top Age of War. But if by the end of the series, Age of War became the peak quality of the series for me, I wouldn’t be surprised. It was that good.

“When people are happy, they can become deaf. I don’t know why that is, but I’ve noticed it to be true. Misery helps us hear. We notice more when we’re in pain. We see beauty more clearly, hear the sufferings of others more loudly. Since you pulled me back, every sunrise is so much brighter, every breeze a delight. I think people who survive tragedy aren’t so much scarred as they are cleansed. The wax comes out of their ears and the clouds leave their eyes. The barriers between them and the world are reduced.”