Dawnshard is another illuminating and beautifully crafted piece in the Cosmere puzzle.

Every time a new Stormlight Archive story gets released my excitement goes through the roof. There is no reading I enjoy more, and I am so thankful that I am lucky enough to be able to regularly read new Cosmere stories. You keep them coming please, Brandon, and we will keep on reading them.

Dawnshard is a novella, and as such shorter than your average SA book, but it’s still longer than Brandon planned and comes in at about 200 pages. Let me tell you though, I read this in the blink of an eye. All my favourite authors have that talent to make time disappear, but none more so than Brandon Sanderson and it’s almost sad (not really), because while Brandon continuously over delivers, I can never seem to get enough. Dawnshard is no different. Slotting into the spot between Oathbringer and Rhythm of War, it bridges the gap between those two books with a story that focuses on an expedition to the mythical island of Akinah (Many fans will know that this mysterious place is exciting for a bunch of reasons). 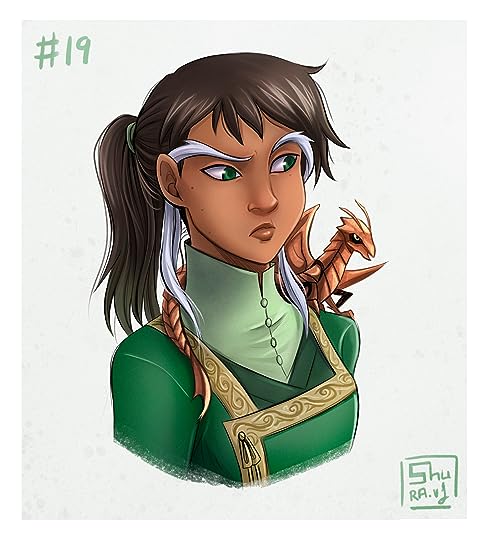 I had no idea what to expect when Sanderson first announced Dawnshard apart from another fantastic read, but I honestly was a little disappointed when I heard that the main characters of this novella were going to be Rysn and Lopen. I remembered enjoying Rysn’s interludes, but never thought of her as a main character, and the same case could be made for Lopen. While humorous and entertaining, the lead role for Lopen seemed to be a bit of a reach and maybe also a little too much of him for my taste…

…I should have never doubted though. Brandon Sanderson has pulled a Larkin out of the hat here, setting up minor characters as ones I want to see much more of now, with Rysn in particular becoming a bit of a favourite of mine. Rysn, Lopen, Huio, Cord – Sanderson gives them the spotlight and they absolutely revel in it. These are not characters most people would expect to be given major development, but their growth is explosive in Dawnshard and I LOVED every second of it. There is so much more depth to them than the glimpses we have been given before, and the things we discover about them are an absolute joy to read. Something else to take note of is that Sanderson manages to make you think quite a lot about disabilities and how they affect those who have them and also those who interact with people who have them, elevating the story even more with wonderfully empathetic writing. Also, did I mention how much I love Rysn already? 🙂 I will honestly be holding out hope that at least one, but hopefully all of the above characters get much larger roles in the rest of the series. And this should go without saying, but MORE CHIRI-CHIRI please!

The other big surprise of this book is the absolute wealth of information that we are given regarding the Cosmere. (FLAILS!). You don’t always expect such major reveals in an in-between novella, but Sanderson packed Dawnshard with lore and hints that still has me and my friends discussing and guessing at the implications and possibilities.

Dawnshard is a sublime entry in the Stormlight Archives and sets the stage beautifully for Rhythm of War. With this small puzzle piece of the Cosmere slotting into place, Sanderson not only shattered my expectations for this book, but also delivered a wonderful story that was exciting and utterly delightful, shedding light on so many different aspects. Pairing Rysn and Lopen was an inspired decision, and together with the marvelous character development and larger glimpse at the mysteries of the Cosmere it has made Dawnshard an indispensable read.

What a journey this is turning out to be.

You can purchase a copy from: Book Depository (Free shipping) | Amazon UK | Amazon US

All of my reviews