The Alloy of Law by Brandon Sanderson

The Alloy of Law is an immensely enjoyable start to the second era of Mistborn Saga by Brandon Sanderson.

“The measure of a person is not how much they have lived. It’s in how they make use of what life has shown them.”

It has been almost six years since I first read The Alloy of Law for the first time in 2016. I’ve never written a proper review for it, and now that I finished my reread of the novel, I might as well do it now. The Alloy of Law the first book in Mistborn: Wax and Wayne series, a series that started as a side project, but eventually turned into the official second era of Mistborn Saga. Because, well, Brandon Sanderson. And I will not be complaining about it. More Mistborn is always a good thing for me. Whether it’s the first era or the second era, the world of Scadrial feels like home to me. And that notion is proven once again as I found myself continuously captivated by The Alloy of Law on my reread. The first time I attempted reading The Alloy of Law, I was worried. The first Mistborn Trilogy is a series that is immensely important to me. I was worried The Alloy of Law and its sequels would be inferior in comparison. Luckily, this worry of mine was unfounded. In fact, I think I loved The Alloy of Law even more on my reread. It is never wrong to believe in Sanderson’s storytelling skills.

“If you remove the foundation of trust from a relationship, then what is the point of that relationship?”

The story in The Alloy of Law takes place three hundred years since the events of The Mistborn Trilogy. The world of Scadrial is now a world filled with science, technology, railroads, electricity, and tall buildings. And yet, these advancements in civilizations don’t mean Allomancy and Feruchemy disappear; they continue to shine and become a necessity in the world. Allomancy and Feruchemy are more necessary in the frontier lands known as the Roughs, because they are crucial tools to establish order and justice. Our main characters are Waxillium Ladrian, a rare Twinborn who can Push on metals with his Allomancy and use Feruchemy to become lighter or heavier at will, and his partner, Wayne. After twenty years in the Roughs, Wax must now put away his guns and assume his duties as the head of a noble house—until he learns the hard way that the mansions and elegant tree-lined streets of the city can be even more dangerous than the dusty plains of the Roughs. The novel is relatively small, fast-paced, and incredibly compelling. Despite this novel being a shorter novel by Sanderson’s standard, Sanderson successfully tells a very readable narrative with the themes of responsibility, doing good, overcoming regret, and the difficulty and downside of law superbly.

“The mark of a great man is one who knows when to set aside the important things in order to accomplish the vital ones.”

If you are reading this review and have not checked other reviews on The Alloy of Law yet, I will give you a reminder first. It is mandatory for you to NOT expect Mistborn: Wax and Wayne to be told in a similar vein to the first Mistborn Trilogy. Although this is indeed a canonical story in The Mistborn Saga by Brandon Sanderson, the way it is told is different than the first trilogy. The first era of Mistborn is darker and more epic in its tone and storytelling scope, The Alloy of Law and its continuation is not like that. At the very least, for The Alloy of Law, it is meant to be fun and entertaining. And in my opinion, this novel totally delivered on those fronts. I forgot how fun The Alloy of Law is until I reread this book. Of course, if you’ve read the first Mistborn Trilogy, you will find many elements and Easter Eggs that enhance your reading experience of The Alloy of Law. But more on this later. I will talk about the new cast of characters first. 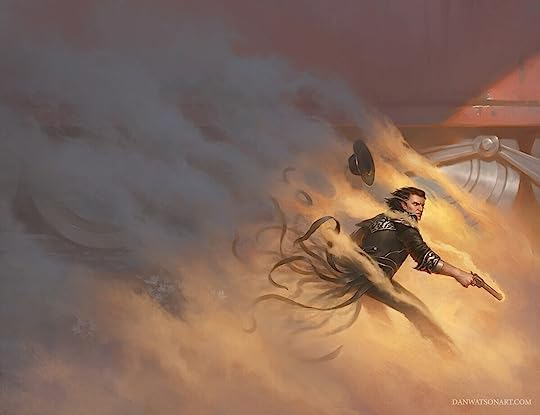 Wax & Wayne is a duo I cherish. I remember on my first read that I immediately warm up to these two characters, and on my second read, I can certainly understand why. I feel like the contrast and harmony of these two characters were excellent. It reminded me of watching Sherlock Holmes (A more casual version of him) and John Watson (Wayne is a happy-go-lucky version) trying to solve cases together. In the world of Scadrial, too! Wax’s kindness felt palpable, and in a relatively short amount of reading time, I effortlessly empathized with him on several occasions in the book, especially after the life-changing event that happened to him in the prologue. This is where Wayne comes in. Without Wayne, I do not think Wax would ever find moments of happiness again. I love this duo. Similar to other of my favorite duos in the fantasy genre like Royce and Hadrian, Locke and Jean, many in the Malazan Book of the Fallen, and more, Wax and Wayne is indeed one of my favorite duos in fantasy. They continuously make me smile and laugh with their banter, and reading their conversation with each other just feels like I’m watching my old friends talking again.

“That hat looks ridiculous.”
“Fortunately, I can change hats,” Wayne said, “while you, sir, are stuck with that face.”

But Wax and Wayne weren’t the only characters that drive the narrative. We also have Marasi Colms and Steris. If this is your first time reading through The Alloy of Law, you will like Marasi more than Steris here. That’s totally understandable. I was the same when I first read this book. Plus, Marasi does have so much more spotlight in this book compared to Steris. But I can assure you one thing, Steris will become a character you will love by The Bands of Mourning. Up to this day, I still think Steris is one of Sanderson’s best female characters so far. But I am getting ahead of myself. And this isn’t me saying I don’t like Marasi. She’s a great character. And her ability and interests in law and justice provided intriguing discussions on the theme of morality. I just, well, love Steris so much more. Yes, this is after the fact that Marasi is insanely capable of handling a rifle. 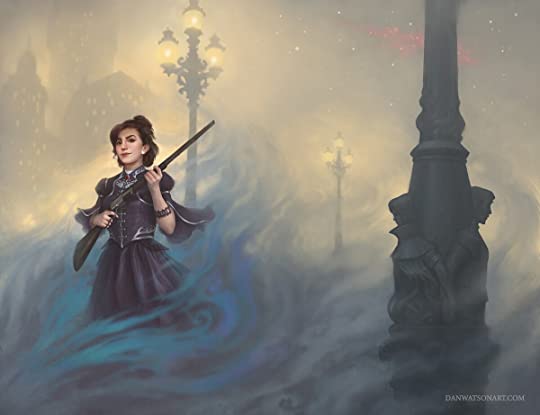 For years, I have mentioned many times that the three metallic arts in Mistborn Saga is my favorite magic system in the fantasy genre of novels. The three metallic arts are the magic system of Allomancy, Feruchemy, and Hemalurgy. But what we have seen in Mistborn Trilogy is not the end of the line for these magic systems. Sanderson proved, once again, just how creative and brilliant he is at crafting a unique, memorable, and immersive magic system by adding the concept of Twinborn. A Twinborn is someone capable of using both Allomancy and Feruchemy, usually one ability for each metallic art. Mistborn is super rare now. But with the concept of Twinborn being applied to the narrative, Sanderson opened up many paths and potential that led to dynamic, fast-paced, and innovative magic and action sequences. This is already shown through Wax’s usage of Push and his capability to decrease/increase his weight. And undoubtedly, through Wayne’s usage of the speed bubble. Which I will let you find out for yourself. Or even the effect of compounding used by Miles Hundredlives. It is all so impressive, and we are only at the beginning stage of Mistborn: Wax and Wayne. 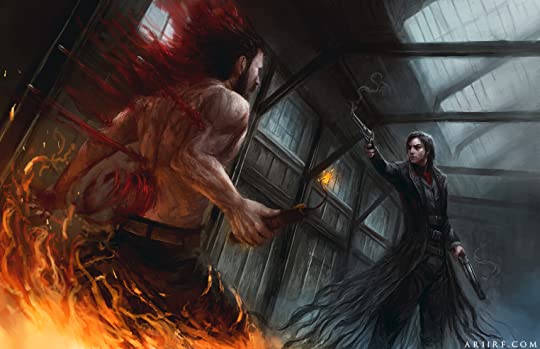 Lastly, as I said earlier, you are in for a barrage of Easter Eggs if you have read the first trilogy before starting this one. When you open the first few pages of the book, you will immediately notice the name “Elendel” on the map. Plus, it is not only Elendel; many other sections in the map are named after the characters of the first trilogy. The world of Scadrial in this era has moved away from the ash-fallen dark world. We are now in a Steampunk and Western setting. This gives a refreshingly new and yet familiar feeling to the world. I loved it. I could extend this review by another thousand words if I were to describe each Easter Egg in the novel. And I do think this is something you have to experience yourself. I mean… One or two characters from the first trilogy briefly appeared here. Who are they? Read and find out!

“Once one becomes a man, he can and must make his own decisions. But I do offer warning. Even a good thing can become destructive if taken to excess.”

I do not think The Alloy of Law will blow your mind. But if you’re looking for a wonderful and addictive short novel to read, you can’t go wrong with The Alloy of Law. it is pretty much Mistborn infused with Sherlock Holmes and X-Men. The characterizations were well done, and for such a relatively short book, Sanderson has packed more than enough impressive ideas and intricacies to make the world-building and action sequences. Personally speaking, I think it is necessary to read the first trilogy first before reading The Alloy of Law. With all The Easter Egg and the Cosmere implications going on, it is not recommended to read Mistborn: Wax and Wayne without at least reading the first era. The Alloy of Law is built to entertain, and it succeeded brilliantly at it for me. From what I can recall, The Shadows of Self and The Bands of Mourning were better than this one. And I look forward to rereading them.

Picture: The Alloy of Law by Marc Simonetti 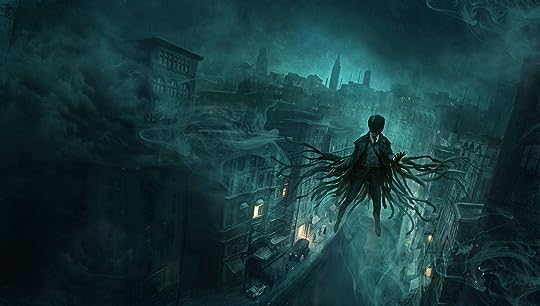