Sharp Ends, the ultimate collection of tales from The First Law World by Joe Abercrombie, is a great dessert to provide insights and background for most of the previously established characters in the past six novels.

Picture: My complete collection of Joe Abercrombie’s The First Law World so far. 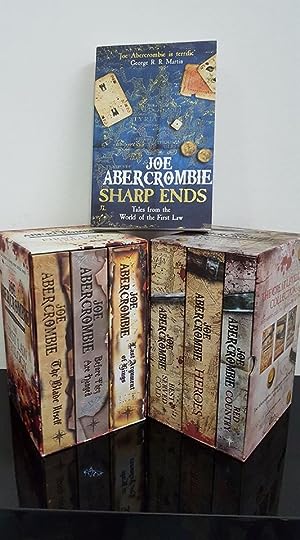 Generally speaking, I am not a fan of short stories. Whether the short story is on its own or compiled into a collection, I will almost always prefer reading novels. However, there’s simply no way I’m missing any stories in The First Law World. The First Law World is one of my favorite series of all time, especially The First Law Trilogy which sparked my love for reading grimdark fantasy novels.

And unlike most collections of short stories, there seems to be a sense of continuity structure in Sharp Ends that enhanced my reading experience. The separate stories were told in chronological order, and in the center of Sharp Ends, a superb female duo that goes by the name of Javre and Shev made their appearances several times as if they were the main characters of this collection.

Below is my mini spoiler-free review on each story contained in this collection.

A Beautiful Bastard (Kadir, Spring 566, nine years before the events in The Blade Itself): 4.5/5 stars

Told from Salem Lew’s POV, this was a wonderful short story to start off the collection by letting us see a glimpse of Sand dan Glokta’s life before he became the crippled torturer we know. Some other characters from the series also appeared here in their much younger days. West, Tunny, and Valimir specifically. I am ranking this as the second best short story in this collection. I mean, come on… it’s Sand dan Glokta’s younger days! It’s our beloved torturer here!

Small Kindnesses (Westport, Autumn 573, two years before the events in The Blade Itself): 4/5 Stars

Small Kindnesses is the first short story in the collection depicting the encounter between Javre, the Lioness of Hoskopp, and Shevedieh, the thief who tries to find redemption. This is the beginning of the duo I mentioned earlier, and it’s very well written and fun to read. 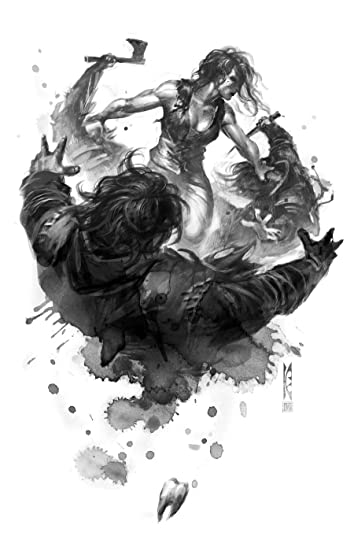 The Fool Jobs (East of the Crinna, Autumn 574, one year before the events in The Blade Itself): 3/5 stars

A decent short story in a day of Curnden Craw, one of the main characters from The Heroes. Together with his crew, Curnden Craw has been sent on a mission to recover a ‘thing.’ It is good to see the faces of Craw and his crew once again here, but there is nothing too memorable about the story itself.

Skipping Town (The Near Country, Summer 575, same year with the events in The Blade Itself): 3/5 stars

Skipping Town is the second story featuring the female duo, Javre and Shev, on another day of bad luck and disaster. Like the first short story, it was entertaining to read and filled with actions. However, I did find the story way too short for my liking.

I seriously didn’t expect to see Temple, one of the main characters in Red Country, in this story. Hell is a short story that takes place during the time of the events told in Before They Are Hanged, specifically on the siege of Dagoska. It was a great addition to Temple’s character to see how hellish the siege was through his POV back when he was young. 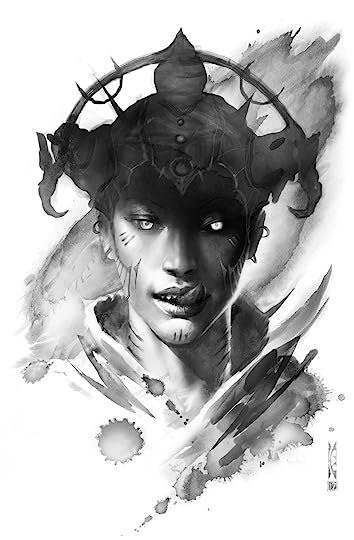 Two’s Company (Somewhere in the North, Summer 576, same year with the events in Before They Are Hanged): 4/5 stars

Two’s Company is the third story in the collection that features the female duo again. One of the better short stories in Sharp Ends. It was hilarious, and I thoroughly enjoyed reading the duo’s encounter with Cracknut Whirrun, which you will know if you have read The Heroes. 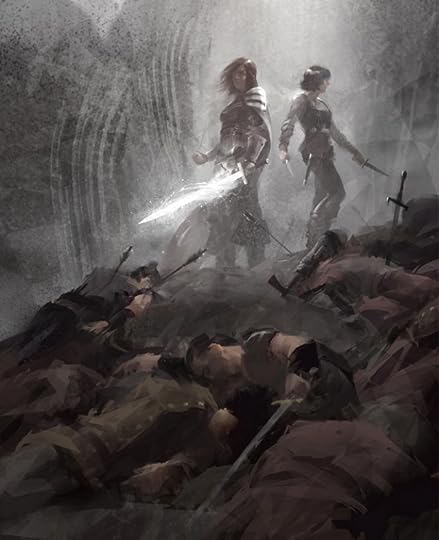 Looking at the repercussion of Monza’s vengeance in Styria through the perspective of three random people was a nice touch; the highlight, of course, is to see a bit more of Bremer dan Gorst here.

Some Desperado (The Near Country, Summer 584, same year with the events in The Heroes): 1.5/5 stars

Meh.. just meh. I am already not a fan of Western stories. And Shy South, the most boring main character that Abercrombie has ever created has returned as the main character here. I sincerely hope in the future Abercrombie doesn’t visit this setting or characters on the Western side anymore. Unless, of course, the story is something to do with Lamb.

Taking place closely before the war happened in The Heroes, and in a way that is similar to it, Abercrombie did a great job in showing the merciless effect of war on both sides. Also, we have more insight into Gorst’s personality, which is always a plus in my book.

Three’s a Crowd (Talins, Autumn 587, three years after the events in The Heroes): 4/5 stars

The fourth story in Sharp Ends with the duo of Javre and Shev as the main characters. This time, the narrative took a different approach from their previous stories. The previous three stories were all hilarious and fun to read, but here we finally get the emotional factors. Abercrombie showcased the duo’s feelings after their journey together over the past 14 years. Also, this story can be said as a little epilogue to Best Served Cold, and we get to see some of the familiar faces from the stand-alone trilogies making an appearance here.

Abercrombie’s prose remains great as always, and I enjoyed reading the experimentation in the storytelling direction. However, I did not care too much about the plot, which is basically a retelling of Averstock liberation in propaganda and exaggeration about Nicomo Cosca. 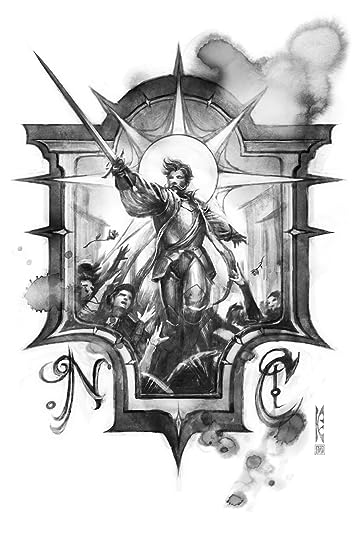 Tough Times All Over (Sipani, Spring 592, two years after the events in Red Country): 3.5/5 stars

Chronologically, this is the farthest story in the Tales from The First Law world. This is the fifth and also the last story featuring the main duo of Sharp Ends. The story takes place two years after the end of Red Country in Sipani. It contained a beautiful flow to the narrative imbued with Abercrombie’s trademark consecutive shifting point of view, but I felt it’s also a bit anticlimactic end to Javre and Shev’s story.

Made a Monster (Carleon, Summer 570, five years before the events in The Blade Itself): 5/5 stars

One of the best short stories I have read. Told from Bethod’s POV about his relationship with Logen and how he tried to gain peace. Made a Monster is an exceptional story to close Sharp Ends. In my opinion, it is definitely the best title out of the collection. It is thrilling, bittersweet, and gory. Lastly, plenty of the beloved catchphrases from Logen Ninefingers/The Bloody Nine also exist here. Overall, it is exactly how a short story in The First Law World should be written. Brilliant. Enough said.

“Within reach of his hand, the Bloody-Nine was master.”

Picture: Made a Monster by Raymond Swanland 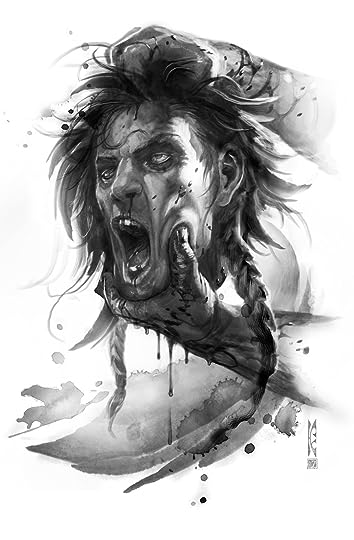 Like all collections of short stories, there will be some bad ones, good ones, and great ones. Sharp Ends is not an exception. However, it does not change the fact that this is a must-read for all fans of The First Law World and Joe Abercrombie’s books. I still cannot believe that I won’t have any more books from this world to read until maybe 2019. I have read every book Abercrombie has written for the past ten years in The First Law World in less than a year. Excluding the short stories in this collection, which are not a fair comparison to the main novels, none of the other six main novels received anything less than 4 stars rating from me. Not to mention that five of them are included in my list of favorite books. Until the new trilogy surfaces, here is one last philosophical quote to end my journey so far in The First Law World.

“But it is easy to speak of the past, impossible to go there.”