Hi everyone! Petrik from Novel Notions here. We, the team at Novel Notions, are very thrilled and honored that we have the opportunity to participate in the blog tour for She Who Became the Sun by Shelley parker Chan.  This is the first book in Radiant Emperor duology, and with its paperback release being imminent tomorrow, here’s once again my review on She Who Became the Sun and why you should read it soon if you haven’t read it!

She Who Became the Sun by Shelley Parker-Chan

She Who Became the Sun has the bravery to pitch itself as The Song of Achilles meets Mulan and actually live up to it.

If you’re active on bookish social media, you should know that She Who Became the Sun by Shelley Parker-Chan is one of the two most hyped books published by Tor Books this year; the other one being The Blacktongue Thief by Christopher Buehlman. Both of these books have been received praises from many people for the past few months, and with these kinds of huge praises and buzz, there’s the tendency for them to disappoint. Now, I haven’t read The Blacktongue Thief yet, but the hype for She Who Became the Sun is real and well-deserved. With such a striking cover art illustrated by JungShan Ink—the artist who illustrated the cover art to The Poppy War Trilogy by R.F. Kuang—this historical fiction/fantasy debut managed to live up to all the praises. 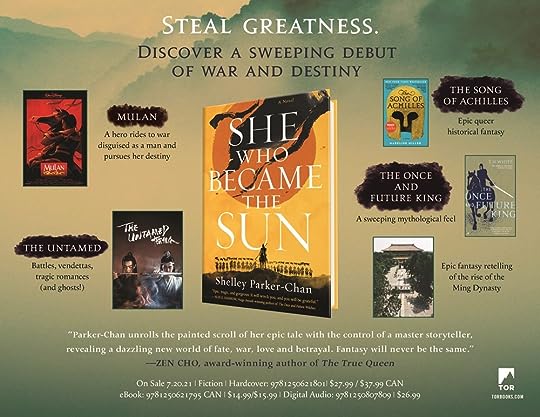 “Becoming nothing was the most terrifying thing she could think of—worse even than the fear of hunger, or pain, or any other suffering that could possibly arise from life.”

She Who Became the Sun is the first book in Radiant Emperor duology, and it’s a reimagining of the rise of the founding emperor of the Ming Dynasty. The year is 1345, in a famine-stricken village, two children are given two fates; the boy—Zhu Chongba—is destined for greatness, and the girl is fated to become nothing. However, when a bandit attacks this village and orphans the two children, Zhu Chongba succumbs to despair and dies. The girl, with a burning desire to survive no matter what it takes, decides to take Zhu Chongba’s name and steal her brother’s fated greatness. I loved this book, and I’m genuinely impressed by how well-written this book was, especially remembering that this is a debut novel. The themes of destiny, war, gender, identity, desire, love, and duty were delivered efficiently with much impact; the importance and freedom in our power as an individual to choose, regardless of our circumstances, were spectacularly elaborated. Seriously, I would be lying if I say that I didn’t feel invigorated by Zhu’s resilience.

“Monks were supposed to strive for non-attachment, but that had always been impossible for Zhu: she was more attached to life than any of them could have understood.”

Yes, the main character, Zhu Chongba was undoubtedly the main highlight of the book for me. Her resilience, her cunning, and her desire to live were nothing short of inspiring to me. I’m not saying that I agree with all of her decision, but Parker-Chan’s way of crystallizing Zhu’s motivation to the readers was so superbly-written that I can’t help but felt that I understood Zhu. Zhu is overall a pragmatic character, and she’s willing to do everything in her power to defy fate, fight, live, and most importantly, she refuses to become nothing. I loved her character’s arc; her moral is colored in grey rather than black and white, and her storyline just felt so believable to me.

“So I always knew you had a strong will. But what’s unusual about you is that most strong-willed people never understand that will alone isn’t enough to guarantee their survival. They don’t realize that even more so than will, survival depends upon an understanding of people and power.”

Honestly speaking, Parker-Chan did such an excellent job on Zhu’s characterizations, and it made the beginning of Part II worrying for a while. Here’s the thing, Part 1 of the novel centers entirely on Zhu’s coming-of-age story, and she was the only POV character during this section; the sudden shifts to a multi-POV narrative in Part 2 of the novel took a bit of time for me to get used to, and for a while, I was terrified that this storytelling decision would end up diminishing the quality of the narrative. Fortunately, my worry was unfounded; the novel only became better because of the change to the multi-POV structure. Ma, Ouyang, and Esen are the other three main characters that, in my opinion, significantly improved the depth and emotions of the novel. Similar to Zhu, these characters have character development and characterizations that felt so organic and well-realized. The character’s respective motivations, agendas, and backgrounds that complex their emotions, relationships, and sense of duty further were so incredible that I couldn’t even imagine how the novel would be like if it was told solely from Zhu’s perspective.

“Desire is the cause of all suffering. The greater the desire, the greater the suffering, and now she desired greatness itself. With all her will, she directed the thought to Heaven and the watching statues: Whatever suffering it takes, I can bear it.”

I guess it shouldn’t come as a surprise that the characters and story in this novel won’t be a happy-go-lucky one. As I said at the beginning of this review, She Who Became the Sun is a reimagining of the rise of the emperor of the Ming Dynasty; if you’re familiar with the history of The Red Turban Rebellion and Zhu Yuanzhang, I’m sure you’ll recognize some—not all—characters involved in Zhu’s story. I personally think it’s more accurate to call She Who Became the Sun a historical fiction—or maybe historical fantasy—than a straight-up fantasy novel; rather than having me barraged you with essays and paragraphs of information regarding the inspirations, I think it would be better for me to give you the link to the author’s website—I advise you to check these only after you finished reading the novel—on the subject of the historical figures instead: https://shelleyparkerchan.com/histori…

But regardless of genre classification, there’s one thing for sure about She Who Became the Sun; it is written lyrically and wonderfully.

“Learn to want something for yourself, Ma Xiuying. Not what someone says you should want. Not what you think you should want. Don’t go through life thinking only of duty. When all we have are these brief spans between our non-existences, why not make the most of the life you’re living now? The price is worth it.”

Parker-Chan has an immensely desirable writing style that displays her proficiency for storytelling in practically every scene of the book. Tensions, dialogues, atmosphere, and emotions were conveyed efficaciously, and the pacing of the narrative flowed naturally without hindrance. She Who Became the Sun by Shelley Parker-Chan is a novel destined for greatness, and greatness will be achieved when the publication date has been reached. Although this is the first book in a duology, rest assured that there’s no cliffhanger, and the book worked well as a standalone. There are still 5 months before this wonderful debut comes out, and I’m already so looking forward to seeing how this duology will be concluded. Claim greatness for yourself. Claim She Who Became the Sun.