Review copy was provided by Gollancz in exchange for an honest review.

The Last Wish made me feel like I was reading Geralt doing his side quests in the game.

Similar to millions of gamers—now readers—around the world, I heard about The Witcher book series through the video games adaptation. The Witcher 3: Wild Hunt remains one of the best open-world role-playing games I’ve played, and even though it has been years since I finished the game, I still think about my 100+ hours of adventure with the game. More than six years have passed since I first finished The Witcher 3: Wild Hunt, and I’ve wanted to know more about the characters, magic, and world I felt invested in. It’s not until The Last Wish Illustrated Edition published by Orbit Books and Gollancz came out a few months ago that I finally took the plunge to start reading the series. As someone who loves the game a LOT, and considering that this is a different medium of storytelling compared to the books, I honestly don’t expect the books (this time) would be able to live up to the satisfaction and escapism I got from playing the games. I’m not saying the books can’t achieve that; from my experience, books (original material) are often superior to their adaptations. But compared to Witcher 3: Wild Hunt, I don’t think the books can match the quality of storytelling and experience from playing the game. However, the video games adaptation is supposedly a continuation of the books series. And I fully expect I would love reading the books, too. If not, why even bother reading, right? I will be reviewing The Last Wish based on my thoughts on the overall book instead of a specific review for each short story. And at the end, I will also be giving my thoughts on the illustrated edition and whether you should buy it or not.

Picture: The Last Wish by Navar 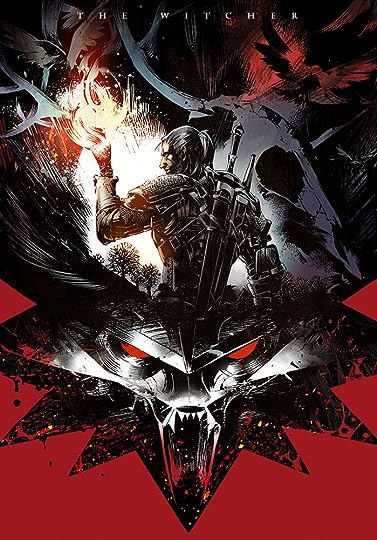 The Last Wish is—chronologically—the first set of short stories in The Witcher by Andrzej Sapkowski, but publication wise, The Last Wish was published after Sword of Destiny. It has frequently been mentioned, The Last Wish worked so well as an introduction to the characters and world of The Witcher Saga, and as far as a reading-guide goes, I think The Last Wish indeed worked nicely as—technically—the first book of the series. There are seven short stories in The Last Wish, and one of the short stories, titled The Voice of Reason, takes place in the present timeframe. Geralt of Rivia is a Witcher. After being injured in battle, he’s resting in a temple during the present timeframe. He’s recounting some of the recent events he encountered, and these flashbacks are told in a short story format, but there’s one exception. The present timeframe is a short story/novella interspersed throughout the novel. I read Hyperion by Dan Simmons last month, and the relatively unconventional format of The Last Wish reminded me of that.

“People,” Geralt turned his head, “like to invent monsters and monstrosities. Then they seem less monstrous themselves. When they get blind-drunk, cheat, steal, beat their wives, starve an old woman, when they kill a trapped fox with an axe or riddle the last existing unicorn with arrows, they like to think that the Bane entering cottages at daybreak is more monstrous than they are. They feel better then. They find it easier to live.”

If you know my reading taste, then you’ll probably know that I’m not a fan of short stories in fantasy. I tend to find them underwhelming due to their short length. The Last Wish, and probably Sword of Destiny, have this working against their favor. Or at least that’s what I thought, but that’s certainly not the case. I’ve watched the two seasons available so far in the TV series adaptation of The Witcher, this means I knew the events in this collection of short stories already. That’s why it’s so surprising to me that I still found myself intrigued by the narrative. Other than The Edge of the World, which was underwhelming, I enjoyed every other short story here. My thoughts on the characters are, undoubtedly, influenced by my feelings on the characters of the games. I don’t think I can change this no matter how hard I try. I read this collection of short stories, my thoughts and imagination treat the narrative as a prequel to the video games. Whether they’re actually canon or not, at this moment, they are canon in my head. And because of this, I am slightly more receptive and biased towards the characters and the world. Even if we only get to see glimpses and an introduction to them here, it felt like I was reading the origin story of The Witcher video games characters I came to love. A Grain of Truth, The Lesser Evil, and A Question of Price, were my favorite short stories in The Last Wish.

“Evil is evil, Stregobor,” said the witcher seriously as he got up. “Lesser, greater, middling, it’s all the same. Proportions are negotiated, boundaries blurred. I’m not a pious hermit. I haven’t done only good in my life. But if I’m to choose between one evil and another, then I prefer not to choose at all.”

I didn’t have much of an issue reading The Last Wish. Themes of morality and ambiguous characters’ actions were discussed well in a relatively short novel. That being said, as I mentioned earlier, having watched the TV series already definitely decreased my satisfaction. Only alternate reality Petrik could confirm this, but I would’ve enjoyed The Last Wish more if I hadn’t watched the TV series adaptation. Also, this has been talked about many times, but prose-wise, some sentences here and there felt a bit awkward. I personally didn’t mind them too much. Plus, I heard from many sources that this issue is caused due to the quality of translation rather than Sapkowki’s prose. Other than these, I think this is a solid collection of short stories. It somehow felt like I was watching Geralt doing side quests in the game. I had a great time reading it, and I look forward to reading Sword of Destiny next month.

“They weren’t lying. They firmly believed it all. Which doesn’t change the facts.”

Now, I will review the illustrated edition. Published by Orbit Books in US and Gollancz in the UK, I am more than fortunate enough to receive both US and UK editions of the book to make a comparison. But as far as the comparison between the two goes, the illustrated edition looks almost exactly the same. The new cover art by Tommy Arnold looks gorgeous, and the stunning hardcover edition featured a special naked hardcover appearance with a quote from the book. Both editions have a slight difference in the design of the naked hardcover, and the color on the cover art looks different as well; the US edition is red, the UK edition is maroon. Also, the US edition has a thinner paper than the UK edition, but the US edition is floppier than the UK edition.

Picture: The Last Wish Illustrated Edition by Tommy Arnold Plus the Naked Hardcover 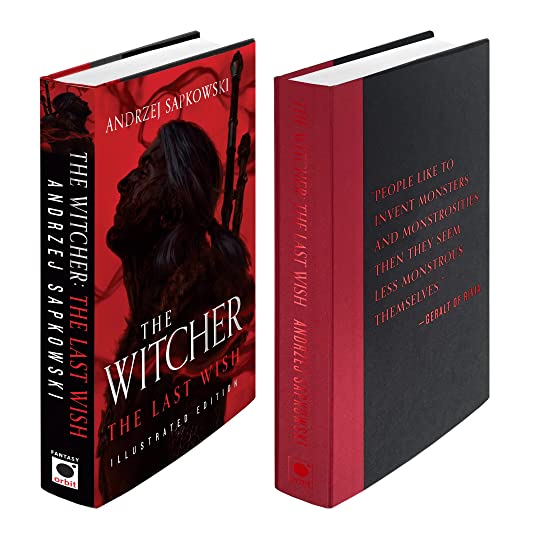 That’s pretty much where the differences between the two ended. In addition to the beautiful red and black hardcover, the illustrated edition also featured beautiful endpapers, AND the main course of it all, eight exquisite interior illustrations by a range of award-winning artists. The artists involved in this edition (in order of appearances for their work) are Tommy Arnold, Kiri Østergaard Leonard, Bruce Brenneise, Jeremy Wilson, Jen Bartel, Allen Williams, Martina Fačková, and Winona Nelson. I think every artist did a spectacular job for the story they got to do, but my favorites will have to be Tommy Arnold’s art on The Grain of Truth, Bruce Brenneise’s art on The Lesser Evil, and Martina Fačková’s art on The Last Wish. 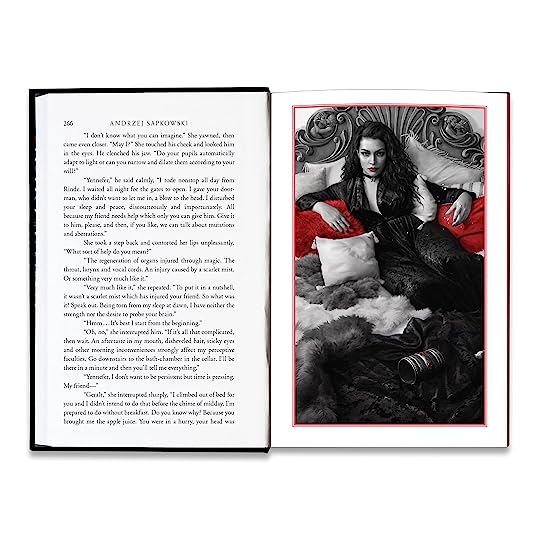 The artworks I shared should provide enough reasonings on whether you should buy this edition or not. I personally say yes, absolutely. I’m a huge fan of illustrated editions. Great interior artworks could enhance the quality of the narrative, and this is definitely one of those cases. It must’ve been difficult for Lauren Panepinto to choose the artists for this collection of short stories. But I think Panepinto succeeded at picking the right artists. For instance, I can’t get enough of Brenneise’s art on The Lesser Evil. If you’ve read or watched the short story, pay attention to the artwork again. This is after The Butcher of Blaviken scene, and the color and depiction displayed the weight of guilt and blood spilled caused in choosing The Lesser Evil. It is brilliant, really. 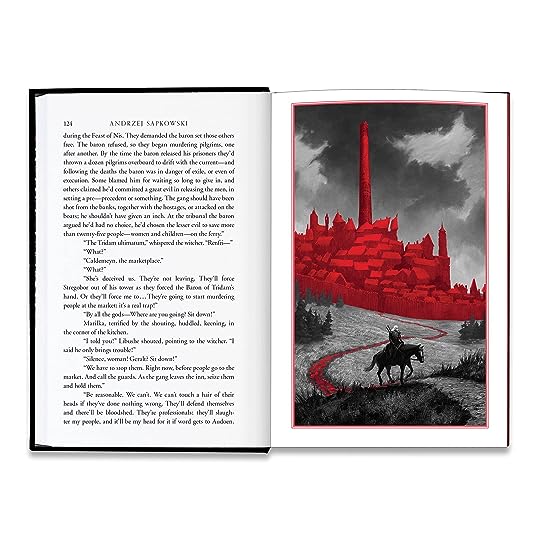