ARC provided by the publisher—Orbit—in exchange for an honest review.

The Bladed Faith by David Dalglish

The Bladed Faith is a familiar and action-packed revenge story executed magnificently.

“People say it is in the daylight that things are laid bare, but I’ve found truths are best revealed when the moon is high.”

Every time I think about how many books David Dalglish has published to this day, I always feel like I have a LOT to catch up on. I’m serious. The Bladed Faith, the first book in The Vagrant Gods trilogy is Dalglish’s 29th published novel, and prior to this novel, I’ve read only The Keepers trilogy. I have mentioned several times that The Bladed Faith is one of my most anticipated books of 2022. True; one of the reasons behind this anticipation is because I enjoyed The Keepers trilogy. But more importantly, what made me so excited for this release is how passionate Dalglish has been towards his work the past two years. And fortunately, not only did I receive the honor to host the stunning cover art reveal (illustrated by Chase Stone and designed by Lauren Panepinto) for this book, but I also got the blessing to read this early. I am not disappointed by this. The Bladed Faith is a great first book to a trilogy, and it shows promises that the sequels will be more explosive and larger in scope. Check out what David Dalglish has to say about The Bladed Faith:

“As I mentioned earlier, each series of mine tends to have a goal or idea that I’m trying out for how I want to tell the story. For The Vagrant Gods, I decided it would be less of an experiment and more of a culmination. I would take what I loved from my various series and try to create what I would view as the definite path forward. This would be the series that, if you asked me what a definitive Dalglish novel was, I would no longer point to A Dance of Cloaks, or The Broken Pieces. It would be this book. This trilogy. A band of powerful friends/ family like the Eschaton Mercenaries of The Half-Orcs and Shadowdance. The religious conflict of The Paladins. The anything-goes philosophy of The Keepers. And as always, my over-the-top battles, in a setting that would allow me to stretch my chops, like the aerial battles of The Seraphim. It’s a new world with new characters, but for so much of it, it felt more like a homecoming.”—David Dalglish

Has the passage above sparked your interest yet? Well, it should! The story in The Bladed Faith revolves around the revenge story of a usurped prince named Cyrus Lythan. Cyrus was only 14 years old when his country was invaded. In the invasion, his parents and gods were slain in front of him. After years of being held prisoner in the invader’s court, a mysterious group of revolutionaries breaks him free, and they provide him the chance for revenge. Cyrus must train and become the figurehead of their rebellion. He has to become a hero to unite the people and strike back, and he’ll don the skull mask and twin swords to become the legendary “Vagrant”—an assassin of otherworldly skill. Creating an illusion of a hero is obviously not an easy task, and Cyrus will discover the price of his vengeance.

“To wear that new face. To become a heroic killer stalking the streets of Vallessau. You will be a rumor at first, one we will seed with whispers in the right ears in the right places. You’ll fight alongside my chosen elite as their figurehead leader, and receive all the glory for your combined exploits. Together, you will challenge even paragons. With every kill, you will make real the rumors that we have sown. And then our whispers will change. Who might this killer be? What identity does the cloak and skull hide?”

Dalglish has mentioned that writing The Bladed Faith feels like a homecoming for him. But in a way, I think there are a lot of familiar elements in The Bladed Faith that will make readers feel at home. The Bladed Faith does not bring anything new to the genre, and it might not become a classic for veteran fantasy readers. But the found family, training montage, clash of faith, and revenge story imbued into the narrative have been polished wonderfully. No battle school trope was involved, but the training montage in the first third of the novel has to be my favorite part of the entire novel.

“I am not training you to win sanctioned duels, Cyrus. You will not fight in an arena with fair odds, equal numbers, and rules of engagement. You will kill men and women who want you dead. It will be brutal, chaotic, and make a mockery of your sense of time. Some moments will last an eternity. Other decisions you will make so rapidly, you won’t know you are making them. Every swing, every block, every parry, and every dodge must be perfect. Anything less is death. Thanet’s resistance has clung to life by its fingertips after Lycaena’s execution. I will not build you up just so you may hang from the Dead Flags, the slain prince whose corpse marks the end of the rebellion. You will be a phantom killer. A merciless shadow. A god among mortal men.

I do think that Dalglish has a way with characterizations. I know that this will be subjective to each reader, but Dalglish’s way of characterizing his characters—good or evil—does click with me, and they make the narrative he puts out more engaging. This was the same in The Keepers trilogy, and it is the same again here. Honestly speaking, I liked Cyrus Lythan and his revenge story. However, it was the main supporting characters that excelled more for me.

“These children didn’t yet know the sting of impossibility. They didn’t know the dread of the unrepentant and the determined ugliness of the Uplifted. They would, in time. When they did, Rayan prayed his stories of hope and forgiveness might bring them comfort.

Picture: Characters of The Bladed Faith by RB Illustration 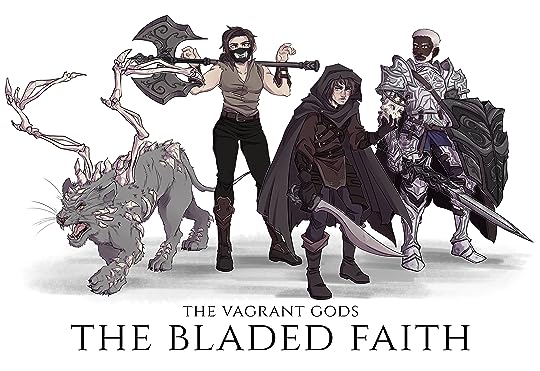 Cyrus is accompanied by several important characters in his mission. First, the ruthless Stasia Ahlai, the Ax of Lahareed. And then the faithful Paladin, Rayan Vayisa. But my favorite of them all will have to be the relatively virtuous Mari Ahlai, the Lioness and a God-whisperer with the power to channel Edarius’s skill to hunt her enemies. I do honestly think that Mari is one of Dalglish’s most well-written characters so far. There was something about her that always felt so kind-hearted and terrifying at the same time, and I loved reading her narration.

“When I hunt, there is pleasure in the blood upon my tongue… War makes monsters of us all, but that is why I become the Lioness. I hunt so no one else must be a monster. I hunt so others may know peace, and love, and live in the joy of their gods and the beauty of their rituals. For me, that is enough to grant my soul peace.”

“The wise can rebuild a better world from the ashes, but for there to be ashes, we must first burn down the old and the rotten. I say we get to burning.”

For the first book of a series, I tend to prefer more characterizations and world-building than having more battle scenes. As I said, Dalglish’s characterizations were praise-worthy, and I loved the characters he has crafted in The Bladed Faith. I did wish we saw them interact more to deepen their respective relationship further. This, of course, does not change my opinion that the battle scenes were well-written, especially in the climax sequence. I hope a more equal balance between characterizations, actions, and world-building will be achieved in the sequel to come in 2023 because I do enjoy reading the character’s journeys, and I want to feel even more immersed in the crimson carnage on The Island of Thanet.

Picture: Map of The Island of Thanet by Sam Swords 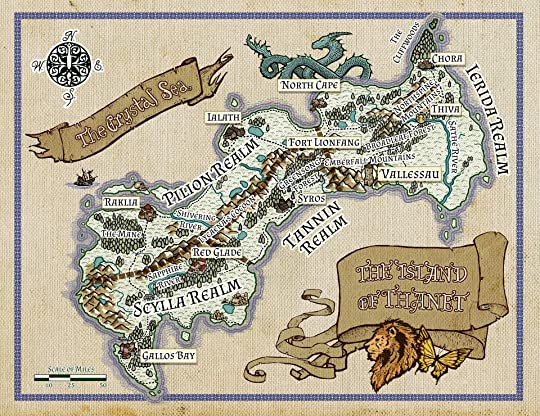 Overall, The Bladed Faith is a well-executed revenge story charged with endearing characters and bloody action sequences. It’s a story about reigniting the candle of hope when darkness invades. Faith and hope rested upon the skull mask and the twin blade wielded by Cyrus Lythan, and I think The Bladed Faith should rightfully earn a spot in reader’s hearts who love reading a fantasy novel embedded with found family, incredible training montage, and great assassins. I look forward to reading the sequel as soon as it’s released.

“The life we wish for, and the life we have, will never meet… If your parents weren’t king and queen, they might have survived Thanet’s invasion. They also might have been soldiers who died defending against the initial wave of boats. They might have been priests executed in the early days when the Dead Flags filled not a crossroad but whole streets. We cannot judge ourselves by the unreal worlds we spin about ourselves. In this world, the real world, your parents were cut down before your eyes. Your sorrow is real, as is your pain. It could have broken you, but it didn’t. You lived on. You grew. You are not defined by your doubts, Cyrus, but the path you walked to bring you to where you are now.”

P.S:
The author told me that I’m featured in this book as a drunken sailor named Kirt for a few pages. I’ve read the scene, and I’m truly thankful for this honor.

You can pre-order this book from: Amazon UK | Amazon US | Blackwells (Free International shipping)