If Uprooted is my Hell, then Spinning Silver is my Heaven.

Five years. It’s been exactly five years since I’ve read Uprooted by Naomi Novik. Honestly speaking, I never intended to read Spinning Silver. I consider Uprooted one of the worst fantasy novels I’ve read, and I had no motivation in trying out more of Novik’s works for five years. However, after hearing from many readers—one of them being my friend, Elliot Brooks—who disliked Uprooted that Spinning Silver worked wonderfully for them, my curiosity was piqued. And then, another good friend of mine—Mary—who also disliked Uprooted decided to sent me a copy of Spinning Silver. She said that Spinning Silver is one of the best standalone novels she has ever read. So here I am, nodding my head and adding my opinion to their praises; they were all 100% right. Spinning Silver is one of the best standalone novels I’ve read. This high rating you’re seeing is not a fairytale. It’s well-deserved, and Spinning Silver rightfully deserves the gorgeous cover art (US edition) illustrated by Nico Delort.

“But I had not known that I was strong enough to do any of those things until they were over and I had done them. I had to do the work first, not knowing.”

Spinning Silver is a brilliantly vivid retelling of Rumpelstiltskin. Miryem is the daughter and granddaughter of moneylenders, but her father’s inability to collect his debts has left his family on the edge of poverty. This forces Miryem to take matters into her own hands. She hardens her heart, and she sets out to claim what is owed and soon gains a reputation for being able to turn silver into gold. However, this reputation draws the attention of the king of the Staryk—grim fey creatures who seem more ice than flesh. Now Miryem has an impossible challenge ahead of her. The fate of Miryem, along with her two unlikely allies, and the two kingdoms are all intertwined; it’s up to them to stop the all-consuming threat. I am incredibly impressed with Spinning Silver. The found family trope has always been one of my favorite tropes in stories; in addition to this, Novik also made sure that the themes of poverty, wealth, and responsibility were executed magnificently. The world-building felt immersive, the characters were superbly-realized, and the prose was enchanting; I believe that Novik has successfully nailed practically everything here.

I am completely in shock by how invested I was with the main characters of Spinning Silver. This is a totally opposite reaction from the one I had from reading Uprooted. The three main heroines of the novel—Miryem, Wanda, and Irina—were unbelievably easy for me to care for. Faced with continuous danger, the three of them have to rely on their wit, strength, diligence, and determination to overcome their adversity. These are characters who genuinely care about their respective family, and they will do everything in their power to help those who matter to them. A few examples: Miryem’s merciless capability as a moneylender was done for the sake of her family, Wanda willfully and happily works HARD to pay off the debt of her abusive dad—abhorrent father figure, by the way—and feeds her brothers, and Irina’s resolve to protect Magreta—and vice versa—was so powerful. I’m probably not in the right spot to say this, but I do think Spinning Silver is the kind of “female-empowering” fantasy novel that’s utterly worth reading.

“A robber who steals a knife and cuts himself cannot cry out against the woman who kept it sharp.”

Miryem, Wanda, and Irina are indeed the three main characters of the novel; they’re the driving force of the narrative in Spinning Silver, and they’re admirable from the beginning to the end. But Novik managed to improve the quality of the novel further by—eventually—including three other main POV characters. Yes, we also have the POV chapters of Mirnatius, Stepon, and Magreta. I totally LOVE Stepon and Mirnatius’s POV chapters. Admittedly, even though I think Magreta’s chapters were well-written, I also didn’t feel it was necessary to include her chapters because they didn’t add anything important to the narrative. That’s the only reason why Spinning Silver didn’t receive a full 5 stars rating from me.

“But it was all the same choice, every time. The choice between the one death and all the little ones.”

So in total, there are six main POV characters in Spinning Silver, that’s indeed not something rare in a fantasy novel. However, there’s something uncommon about Novik’s storytelling structure here; every POV character has a first-person narration. And there’s no name indicator at the beginning of each chapter like Red Rising Saga by Pierce Brown—he used four first-person POV characters—did. This is not an easy feat to do. Doing this multiple first-person POV narrations without any name indicator means the distinction in each POV character’s voice has to be super clear, and fortunately, Novik achieved precisely that with her beautiful prose. Character’s motivations were always well-conveyed, and it was easy for me to empathize with their struggles. I absolutely loved the way these characters interacted with each other.

“There are men who are wolves inside, and want to eat up other people to fill their bellies. That it what was in your house with you, all your life. But here you are with your brothers, and you are not eaten up, and there is not a wolf inside you. You have fed each other, and you kept the wolf away. That is all we can do for each other in the world, to keep the wolf away.”

Novik’s prose was enchanting, and it was able to give the crucial distinction in each character. There were several methods employed to make sure of this, but the most effective and easily recognizable one was the way each specific character refers to someone. For example, Wanda or Stepon always call their father “Da,” we’ll know immediately it’s either the POV of Wanda or Stepon if the word “Da” appears. I know this sounds like a simple thing, but you’ll be surprised by the frequency of this being dormant in oblivion. There’s something magical about Novik’s prose, too. I’ve lived in a tropical country all my life, and sometimes, the snowy and white landscape feels like a fantasy world to me; I’ve experienced real snow once in my life, and that’s exactly how I felt. I got that feeling again from reading Spinning Silver. And do note, even though this is often categorized as a fairytale retelling, it doesn’t mean that the book lacks tension and actions. Chapter 18 and 19 were my favorite chapters of the novel, and they will prove that Novik is definitely an epic fantasy author. 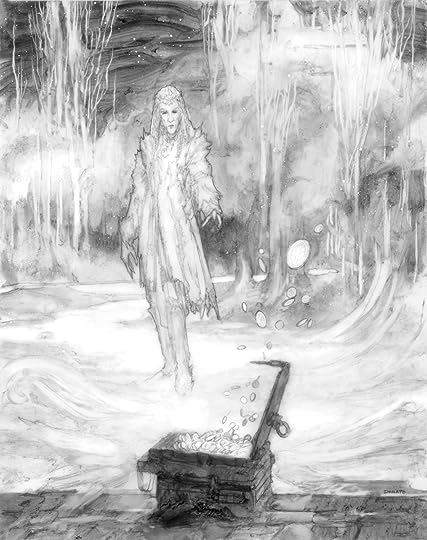 I chose Uprooted as the first book I finished in 2017; that ended up being a mistake. But choosing Spinning Silver as the first book of 2022? It’s the right decision to start off the new reading year. Spinning Silver is one of the most immersive and satisfying one-off standalone fantasy novels I’ve read. If you’re like me who dislike Uprooted, I highly recommend you to give this a read. I dismissed Naomi Novik’s works too soon, and I’m thankful that I gave this a read. I definitely will read more of Novik’s books, either Temeraire or Scholomance next. And if my words aren’t enough to convince you to read Spinning Silver, how about Patrick Rothfuss’s words instead?

“If I live a thousand years, I’ll never write a book as good as Spinning Silver by Naomi Novik.”