Mistress of the Empire by Raymond E. Feist & Janny Wurts

This is the second series I finished this year, and it’s a thrilling and rewarding conclusion to the Riftwar: Empire trilogy.

“Love doesn’t demand; it accepts. It has taken me my life to learn this.”

Here we are. Mistress of the Empire is the third and final book in the Riftwra: Empire trilogy by Raymond E. Feist& Janny Wurts. The story begins three years after the events of Servant of the Empire, and it’s the most relentless start to any book in the trilogy. Seriously, the first quarter of Mistress of the Empire was a brutal and non-stop exhilarating ride. Incredibly dangerous situations visited Mara and her friends non-stop, and I was worried and hooked by the narrative. If you’ve read the series up to this final installment, then you should be familiar with the tone, themes, and writing style of the series. Honor, culture, love, family, and changes are still dominant in this concluding volume. I love how the authors built upon the previous two books. I did mention in my review of Servant of the Empire that I thought it was satisfyingly conclusive already; as it turns out, there’s still more story arc to close, and it all felt so organic.

“Honor was only a glorified word for emptiness, and no sane replacement for the promise of continued life.”

It’s bittersweet to be saying goodbye to these characters. Since the first book, Mara has become one of my favorite heroines in fantasy, and this notion gets stronger and stronger with each book. The authors have done such a terrific job in giving the protagonists and antagonists personalities and motivations that add up to the tension-packed politics and narrative. In Mistress of the Empire, beside Mara, we get to dive deeper into the characterizations of Hokanu, Lujan, and Arakasi. This novel can also be surmised as their books, not just Mara, and the development of these characters was all superbly done. A lot of emotional—mostly sorrowful—events occurred in this book as the dangerous cultures of Tsuranni continues. Servant of the Empire has established that things need to change, but it’s not easy to change hundreds of years of traditions even if they’re dangerous. Sacrifices and hard decisions are necessary, and I’ll leave you to find out for yourself.

“True honor does not condone murder. True power must equally shield the weak that we, for centuries, have thoughtlessly trampled under our feet.”

Admittedly, though still an incredible read, Mistress of the Empire is—by a small margin—my least favorite of the trilogy. Unlike the previous two books where I was immersed cover to cover, I did struggle a bit in the middle section—the parts of Thuril, specifically—of the novel. Mistress of the Empire is a different sort of book in comparison to the previous two books. Both Daughter of the Empire and Servant of the Empire revolved around the bloody Game of Council; it was engaging and constantly interesting to see Mara and her friends trying their best to outwit their opponents. This is still true to a certain extent here. However, Mistress of the Empire has a larger focus on the Great Ones, cho-ja, and powerful magic usage so much more than before. And for this specific trilogy, I prefer the low scale of magic exhibited in the previous two books. Overall, though, these are minor issues on the grander scheme of the novel and trilogy. Their inclusion did bring a stunning climax sequence and satisfying ending, after all.

Picture: Mistress of the Empire by Miguel Coimbra 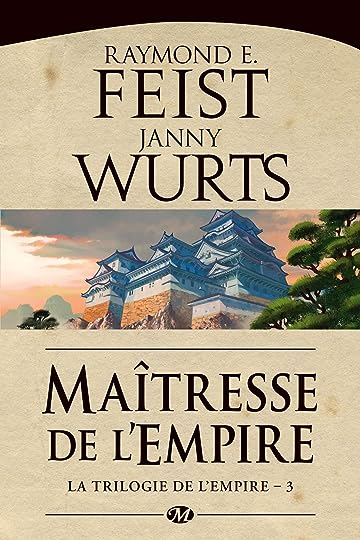 With Mistress of the Empire, what I’ve repeatedly said in my previous two reviews can now be fully confirmed, Riftwar: Empire trilogy has become one of my favorite series. Although I loved this trilogy so much, this is also where I’ll say goodbye to Riftwar Cycle. I’m not too much of a fan of Riftwar Saga. I will, however, be reading through Janny Wurts’s bibliography further, starting with To Ride to Hell’s Chasm next before diving into her magnum opus: Wars of Light and Shadow. I couldn’t even finish Riftwar Saga, but her involvement in Riftwar: Empire trilogy gave the series and world a quality that’s too good to ignore. Regardless of whether you’ve read The Magician by Raymond E. Feist or not, I highly recommend this spin-off trilogy.

“You have taught me the true meaning of a warrior’s creed. Any man can die fighting enemies. But the real test of honor for a man is to live and learn to love himself.”