A Master of Djinn by P. Djèlí Clark

There’s a lot of praises for A Master of Djinn online, and I can certainly understand why.

A Master of Djinn was never in my radar before this year. But after hearing about how well-loved it is frequently across social media—but still feel a bit apprehensive about jumping into the hype—I decided to finish reading the three prequel stories first to have a taste of whether I should give Clark’s debut novel a try or not. As you can probably guess, I felt like I should, and it didn’t disappoint. It’s not mandatory to read the three prequel stories in the Dead Djinn Universe series first before reading A Master of Djinn, but they’ll be beneficial. Plus, two of them are free to read, and all of them are great anyway.

Picture: A Master of Djinn by Kevin Hong 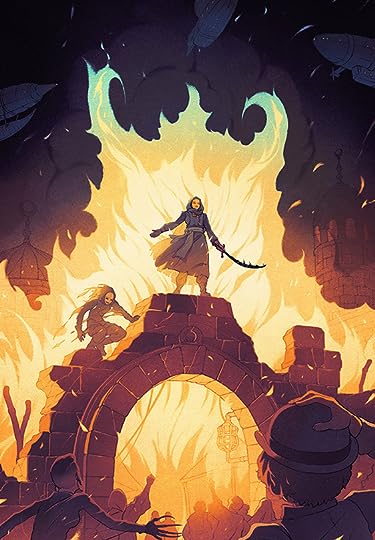 Al-Jahiz was one of the most famous men in history; fifty years ago, he transformed the world when he opened the veil between the magical and mundane realms then proceed to vanish. The year is now 1912, and when someone murders a secret brotherhood dedicated to him, Agent Fatma receives the task to unravel the mystery behind this murder. To make things even worse, there’s a possibility that the murderer might be Al-Jahiz himself. It’s not a surprise that a lot of readers enjoyed A Master of Djinn; the whodunit premise was compelling, the pacing was superb, and Agent Fatma plus all the supporting characters were just delightful to read. I felt that the balance between mystery, humor, magic, and actions was achieved nicely.

“She thought to sit, but remembered her mother’s claim that the Prophet—peace be upon him—had once cut his own cloak rather than move a sleeping cat.”

Almost the entirety of the story was told through Fatma’s POV, but this never detracts the other supporting characters from having their own moment to shine. We’ve known of Fatma from A Dead Djinn in Cairo, and different from my expectation in a good way, Fatma isn’t as “brilliant at everything” as I thought she would be. She made mistakes, and despite how much she try her best to do everything on her own, she does need other people’s help to do her job. I also loved reading the mentor-apprentice development that she has with Hadia, and of course, the relationship that she has with Siti. If there’s anything that I wanted more of, it would be to have more of Hamed and Onsi (the two characters from The Haunting of Tram Car 015) appearances; I think they’re great side characters, and Onsi is always entertaining.

“They reached the dance floor just as the blare of a horn started. Siti spun as Fatma stepped forward, catching her waist and drawing her close, finding each other’s rhythm. The two shared knowing smiles, letting their movements do the talking. As far as Fatma was concerned, if this wasn’t magic, nothing was.”

If you’ve heard the reader’s praises for A Master of Djinn, you probably have heard about Clark’s world-building. The steampunk historical/alternate fantasy world that Clark has created in his Dead Djinn Universe felt superbly refreshing and immersive. There’s something about Clark’s accessible and well-written prose that made me feel like I was there in this mesmerizing alternate Cairo together with Fatma and the rest of the characters. The descriptions conjured vivid imagery; I could see the boilerplate eunuch, and I could almost taste the food and coffee that the characters were having.

“It is a terrible thing, this politics of being perceived as respectable. To be forced to view your frailties through the eyes of others. A terrible thing.”

Lastly, I would like to touch upon the one thing that genuinely surprised me; no spoilers, but the action scenes were so much better than I expected. Now, this isn’t an action-packed fantasy novel. The majority of the storyline revolves around investigations, character developments, and world-building. However, the last quarter of the novel was cinematic and impactful. Honestly, it’s gotten quite epic at the end. That shouldn’t come as a surprise, especially after considering that this is a fantasy series brimming with djinns, angels, technologies, and magic. But I’m genuinely impressed by Clark’s execution.

Picture: One of the interior artwork in A Master of Djinn Subterrenan Press edition by Kevin Hong 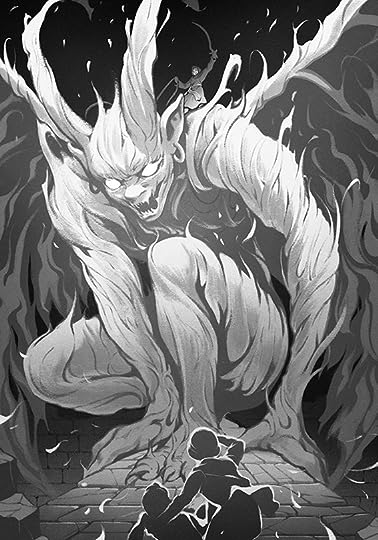 Whether it’s short stories, novella, or a novel, Clark has proven that he’s more than capable of telling a great narrative at any length. A Master of Djinn is a novel filled with so much charm; intriguing characters, a well-paced narrative, and fascinating world-building are all here. This is definitely a great debut, and I’m looking forward to reading the next installment in this series.

“Usually the secrets we keep deep down, ain’t meant to hurt other people… Not saying they won’t but not through intentions. Those deep secrets, we hide away because we’re afraid what other people might think. How they might judge us, if they knew. And nobody’s judgment we scared of more than the one we give our hearts to.”