Daughter of the Empire by Raymond E. Feist & Janny Wurts

Daughter of the Empire is a magnificent page-turning political intrigue with an amazing heroine to root for.

I am seriously shocked by how good this was. Considering the disappointment I felt from reading Magician by Raymond E. Feist, I was equally excited and terrified of reading Daughter of the Empire. But I loved it. I loved it so much. This book triumphed over Magician in every possible way. Now, I’m not sure whether the significant increase in quality is due to Feist’s improvement as a writer or whether this is because of Wurts’s collaboration; it could be both. However, Feist himself mentioned in the acknowledgment of Magician that Janny Wurts made this trilogy so much better; I believe him, and I’ll elaborate more on this later. Let me make it clear once more; I disliked Magician, and I couldn’t even force myself to continue to Silverthorn, but this? It’s easily one of the finest starts to a series I’ve read.

“If you would engage in the Game of Council, woman, you must know that the pieces you manipulate are flesh and blood. For the future, if you continue it is right that you should remember.”

Daughter of the Empire is the first book in Riftwar: Empire trilogy by Raymond E. Feist and Janny Wurts. Riftwar: Empire is a spin-off—and second—series in the Riftwar Cycle, and I don’t usually say this, but I don’t think you need to read Riftwar Saga to enjoy reading this one. It would be beneficial, of course, but not mandatory; there are only a few really small cameos from Magician. The story in Daughter of the Empire follows Mara Acoma, the youngest child of the ancient and noble Acoma family, who is about to take her pledge of servitude to the goddess Lashima. However, the ceremony is disrupted by news of her father and brother’s death in battle. Despite her grief, Mara now has to take up the mantle of the Ruling Lady of the Acoma and participate in the ruthless Game of Council. This is a terrible and harsh responsibility for Mara; she has no experience in politics, and yet the Game of Council is the deadliest contest of politics in the Empire. And this is one of the reasons why the book is incredibly brilliant.

As you can probably guess, Daughter of the Empire is a political-heavy novel. And by the nature of politics, it often means there’s a lot of scheming and talking; these are indeed true to this novel as well. That said, it is immensely important to note that Daughter of the Empire was never boring. It’s the complete opposite, the stakes are dangerously high throughout the entire book, and not a page ever feels like they’re wasted. Mara constantly risks death or destruction with every scheme planned and word uttered. The characters must always pay attention to what they say and do. The Game of Council is utterly bloody and vicious, and the tradition of Kelewan demands honor to be upheld at all cost that every action and words spoken will be taken into account. The thrilling plotline and the superb characterizations definitely made Daughter of the Empire a “one more chapter” book for me.

“Another lesson, child: men are easily injured over matters of the heart. More often than not, those wounds are long in healing. You may have won this round of the game, but you have also gained a deadly enemy. None are more dangerous than those in whom love has changed to hate.”

The decisive factor on why I love this book so much more than Magician is the great focus on the characterizations. Magician felt burdened by issues I often encountered in many fantasy books published pre-1990; that I’ve read so far anyway. What do I mean by this? Well, either the prose is outdated, or the narrative didn’t feel as character-driven as I preferred, or sometimes even both. Fortunately, that’s certainly not the case here. It felt effortless for me to care for Mara; she’s flawed, humane, honorable, determined, inspiring, and her character’s development was developed astonishingly well. From the impactful first chapter, I was already hooked by Mara’s story. Seeing Mara—who doesn’t possess any physical prowess—navigate the ruthless Game of Council by relying solely on her wit, intelligence, cunning, and heart was engrossing. And it’s not just her; the supporting characters and opponents, whether they have a POV spotlight or not, were so well-developed that they enhanced the quality of Mara’s story. I loved reading Mara’s relationship with Nacoya, Arakasi, Papewaio, Keyoke, Lujan; I loved reading her trying her best to outsmart her enemies. Honestly, from reading this book alone, Mara already became one of my favorite heroines of all time. And I still have two more books in the trilogy to go!

“If doubts, even uncertainty, were permitted to grow, she risked paralyzing her ability to make decisions in the future… Regret must be banished, despite her momentary sorrow, and indecision must be forever kept at bay.”

The world of Kelewan isn’t a new setting; it’s a setting visited in Magician. I’ve enjoyed what I’ve read of Tsuranni and Kelewan in Magician, but I always felt that there’s still so much untapped potential in the world-building. Thanks to the collaboration with Janny Wurts, the world of Kelewan and the culture and traditions of Tsuranni felt intensely vivid and well fleshed out. I didn’t get this sense of immersion at all from reading Magician; when I was reading this book, it felt like I was truly there with Mara, and I experienced the Ancient Japanese-inspired culture. Bushido, honor, promises, and words matter to/beyond life and death for them. In addition to the intricate culture, traditions, settings, and politics, we also get a more detailed look at the Cho-ja and their behavior. Also, unlike Magician, it is worth noting that Daughter of the Empire has close to zero portrayal of magic being used in the story. Don’t start this novel expecting there will be a lot of magic usage.

Picture: Daughter of the Empire French Edition by Miguel Coimbra 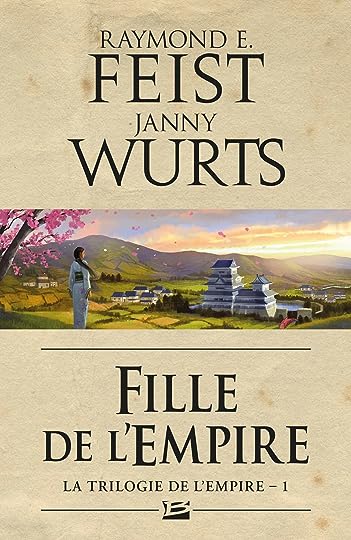 “Life and death, and the winning of glory according to the code of honour, were a subject central to the Tsurani civilization.”

I’ve been praising Janny Wurts a lot on this review, but I can’t help it; the collaboration with her gives the series and prose a compelling strength that I wanted from Magician. The character’s emotions were palpable, and the chapters flow more naturally. Plus, the authors’ capability to set up a scene is absolutely incredible. I’m not kidding; the chapters are indeed longer than I usually prefer, but in every chapter, it felt like there’s a proper beginning, middle, and its own climax sequence. The tension, atmosphere, and character-building were damn good. With the exception of this novel, I haven’t read anything by Janny Wurts yet, but her involvement in giving the Feist’s Game of Council an astoundingly gripping narrative reassured me that I must read more of her books in the future.

“Learn the nature of self, accept all aspects of self, then the mastery can begin. Denial of self is denial of all.”

Extraordinarily good and breathtaking, Daughter of the Empire exceeded my expectations wonderfully. As I always say, it’s a rare occurrence for me to be clicking this well with a fantasy book published before the year 1990; I’m not even born yet when this book was published for the first time! It’s political fantasy done right, and I’m so curious to find out whether or how the remaining two books in the series will be able to top this one. If they succeeded, though, then that means Riftwar: Empire trilogy will be a new entry to “one of my favorite trilogies of all time” list.

You can order the book from: Amazon US | Book Depository (Free shipping)