Rather than The Crown Conspiracy, I personally think The Crown Tower is a greater starting point to Royce and Hadrian’s story.

It’s been four years, Royce and Hadrian. It’s scary how fast time flies; I can’t believe it’s been four years since I’ve read the conclusion to this duo’s adventure in Heir of Novron, the final omnibus in The Riyria Revelations. Honestly speaking, I have contemplated not reading The Riyria Chronicles because the ending of Heir of Novron was too good. I was afraid of encountering a novel about these duos that ended up ruining my affection for The Riyria Revelations. But for quite a while now, a few months to be precise, I have to admit that I miss this duo. And so here we are. By the way, I’m not a fan of the current cover art of The Riyria Revelations and the first two books in The Riyria Chronicles. They’re extremely awful, and I hope Orbit Books will allow a cover change to these books in the future. Seriously, these books deserve a much better cover treatment. They desperately need a Marc Simonetti’s makeover. Let’s get started with the review!

“The thing about the old is that we never change so much as the young. We slip in degrees, adding rings like trees–a new wrinkle here, a shade less color there, but the young transform like caterpillars into butterflies. They become whole new people as if overnight.”

Although it was off to a bit of a rocky start, The Riyria Revelations by Michael J. Sullivan ended up becoming one of my favorite series; I had several issues with Theft of Swords omnibus. Fortunately, none of those problems—except the horrible cover art, which isn’t the author’s fault—exist in this incredibly fun and engaging first installment to The Riyria Chronicles series. For the uninitiated, The Riyria Chronicles is written after The Riyria Revelations, but chronologically it’s a prequel to the series. The Crown Tower takes place twelve years before The Riyria Revelations starts, and it revolves around Hadrian and Royce’s first meeting with each other. The story depicted their first-ever mission together. Hired by an old wizard, these two men who hate each other must pull off an impossible mission; steal a treasure from the impregnable fortress: The Crown Tower.

“Once an idea is learned, once it settles in, it becomes comfortable and hard to discard, like an old hat. And trust me, I have many old hats. Some I haven’t worn in years, but I still keep them. Emotion gets in the way of practicality. By virtue of time spent, even ideas become old friends, and if you can’t bear to lose an old hat that you never wear, imagine how much harder it is to abandon ideas you grew up with. The longer the relationship, the harder it is.”

It may sound harsh, but I really hope Sullivan doesn’t ever write a sequel series to The Riyria duo; the conclusion to their story in The Riyria Revelations was close to perfection. This is why writing a prequel series instead is such a brilliant move from the author, in my opinion. One of the things that bothered me so much in the first few books of The Riyria Revelations was how distant the main characters felt. Theft of Swords started with Hadrian and Royce already becoming partners who understand each other completely; both of them ended up becoming characters I cherished at the final omnibus. However, it certainly took a while for me to get fully attached to them. That situation doesn’t happen at all here; Sullivan’s writing has astronomically improved since The Riyria Revelations, and the development of their relationship showed the growth of these characters organically.

“He’s like the pup of a renowned hunting dog who’s been beaten badly by every master he’s had. He’s a gem worthy of a little work, but he’ll test you—he’ll test you a lot. Royce doesn’t make friends easily and he doesn’t make it easy to be his friend. Don’t get angry. That’s what he’s looking for. That’s what he expects. He’ll try to drive you away, but you’ll fool him. Listen to him. Trust him. That’s what he won’t expect. It won’t be easy. You’ll have to be very patient. But if you are, you’ll make a friend for life—the kind that will walk unarmed into the jaws of a dragon if you asked him to.”

It’s both expected and surprising how much I enjoyed being back in this world. The Riyria duo is one of my favorite duo of all time, and reading their first exciting adventure together felt so compelling. I never once felt bored reading The Crown Tower. My life has been insanely busy lately; I often had to put off my reading after reading a chapter or two. This isn’t my preferred method of reading; I risk losing my immersion in a novel if I keep on taking a break after a chapter or two. But that didn’t happen with this book. I can put down or start the book whenever I want, and I’m always instantly inside the story and character’s head again. Additionally, I’m genuinely pleased by Gwen’s story; I’ve expected the story of The Riyria duo to be superb, but Gwen’s took me by surprise. Once again, I will say that if you haven’t read The Riyria Revelations, start here instead. It’s true that I’m already biased towards these characters due to my experience with The Riyria Revelations, but objectively speaking, this is just a better starting point. 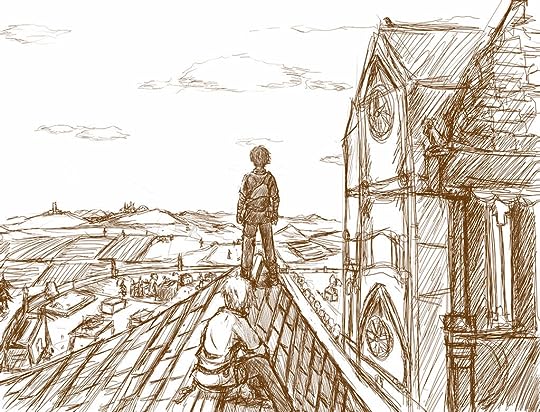 In my opinion, one of the strong signs of a prequel done right can be found in the intensity that can be felt from the story even though we know. Remember, a prequel series means we already know the fate of these characters. This could easily lead to a lack of tension; the reader’s immersion needs to be in full effect for dangerous situations to feel real. And that has been achieved here. I knew Hadrian, Royce, and Gwen appeared in The Riyria Revelations; I knew they’ll survive the ordeals in the entire prequel series. But still, despite the relatively light-hearted tone of the book, I was captivated and worried for these characters.

“Just as learning certain truths robs us of innocence, taking lives robs a man of his soul. Each killing steals a bit of humanity until a murderer is nothing more than an animal. A hunger replaces the spirit. A want for what was lost, but as with innocence, the soul can never be replaced. Joy, love, and peace flee such a vessel and in their stead blooms a desire for blood and death.”

As I mentioned, Sullivan’s prose in The Crown Tower has improved dramatically. One of the things that made Theft of Swords hard to love at first, for me, was how distant Hadrian and Royce felt; this got better overtime throughout the series, but it was a struggle at first. In this novel, I always felt like I was inside the POV character’s head; this is character-driven as I like it. Highly addictive, accessible prose, and there’s a lot of food for thoughts in the text. The Easter Eggs for readers of The Riyria Revelations were well-implemented, and I’m sure both new and returning readers will have a great time reading this.

“I feel very strongly that everyone should have an education. Ignorance is the bane of the world. Knowledge brings understanding, and if men understand the difference between right and wrong, they will, of course, do what is right.”

It is canon in my head now that The Crown Tower is the superior—and official—beginning to Royce and Hadrian’s adventures. This is the conception of a legendary duo in fantasy. I don’t usually recommend reading ahead of publication order, but for this specific case, I recommend starting your journey here instead of Theft of Swords. Sullivan has mentioned each book in The Riyria Chronicles will contain a stand-alone story. If all goes according to plan, and the reader’s demand for this duo continues to be high, there will be twelve books—one per year leading to The Riyria Revelations—in this prequel series. Well, sign me up.

“There’s always hope… We’ve planted the seeds. All we can do now is wait and see what grows.”