Say one thing for Abercrombie, say he knows how to make me love his book even when the setting is Western.

I have to mention one thing about the setting of this book first, I dislike the Western setting. It doesn’t matter whether it’s done in video games, movies, or TV series; I just can’t stand them. Here are a few examples of famous Western movies: 3:10 to Yuma? Sucks; The Assassination of Jesse James? I got a fever because of how bad it was; Hateful Eight? I fell asleep. There are more examples, but with the exception of Django Unchained, Western stories most of the time don’t work for me. This is why my enjoyment of Red Country means a good deal for me.

Red Country is the third and final installment in The First Law standalone trilogy, or in other words, The Great Leveller collection. The year is now 590 AU; it’s been six years after the events of The Heroes, and it’s been thirteen years since the end of Last Argument of Kings. The setting of the book is located on the Western continent of the World: Far Country.

Picture: One of the interior arts by Raymond Swanland for Red Country Subterranean Press edition 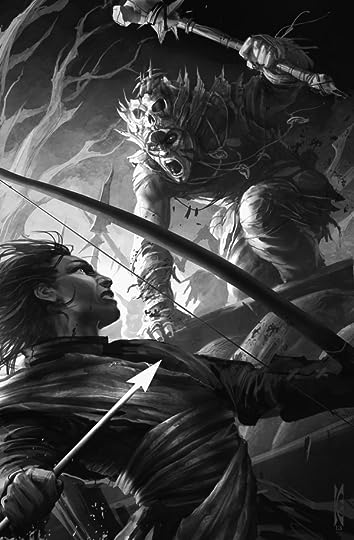 Best Served Cold was a revenge story, The Heroes was a war story, and Red Country—the final book in the First Law standalone trilogy—revolves around a rescue mission. Shy South and Lamb (her adoptive father) came home to find their places burned, and Shy’s brother and sister are kidnapped. Thus began their journey in traveling across the frontier to rescue them back. The plot and the setting were not the favorite parts of the book for me; they’re also why this book didn’t receive a higher rating from me. The plot was predictable, and in my opinion, Part II of the book was boring and tedious to read; it was a travel section oxen and their wagons—once again, Western stories and settings aren’t for me—for more or less 100 pages long. Abercrombie has stated that Red Country was a difficult book to write, and he said he felt burned out during the time of writing this. I think a few sections of the novel did reflect that.

“Though I’m very happy with and proud of the result, Red Country was a difficult book to write. I felt at times somewhat uninspired. Somewhat burned out.” –Joe Abercrombie

What truly redeemed this novel for me came down to two points: characters and action sequences; both are Abercrombie’s greatest strengths as a writer. In terms of NEW characters, this was hands down Abercrombie’s weakest yet—other than Temple, I seriously didn’t care about everyone else, not even the main character Shy South—but the returning characters? I can’t tell you how happy I was to finally see one of my favorite characters of all time making a comeback here. Yes, I’m talking about Lamb, and I think by now most of you already know who Lamb is. I’m not sure whether it’s a spoiler to mention who Lamb is or not; if you look closely at the US cover art, you should know who he is. But just to be safe, I won’t mention who he is; I won’t even post the Subterranean Press edition cover art here despite how much I wanted to. However, let’s just say that Lamb was one of the biggest reasons why Red Country worked for me so well despite the problems I had with the pacing, story, and some characters.

“That’s what courage is. Taking your disappointments and your failures, your guilt, and your shame, all the wounds received and inflicted, and sinking them in the past. Starting again. Damning yesterday and facing tomorrow with your head held high. Times change. It’s those that see it coming, and plan for it, and change themselves to suit that prosper.”

Honestly, my praises towards Abercrombie’s action sequences are getting repetitive, but I must do it again; he totally deserved it. Every action in this book felt dynamic and intense; the build-up in tension leading to each battle scene was so well done, and they exploded satisfyingly. The duel scene between Lamb and Golden was bloody incredible. Abercrombie probably won’t be able to write a duel scene that topped the one featured in the Last Argument of Kings, but there’s no denying that this duel scene was my favorite part of the novel; it was written magnificently. Plus, the great climax sequences and conclusion of Red Country sealed the deal to make me overlook the issues I had with the book.

Trust me, your experience of Red Country would be so much better if you’ve read all the previous books in The First Law World. There’s a lot of crucial character’s background and context that elevated the book, and you’re going to miss out on them completely.

Red Country concluded The First Law standalone trilogy wonderfully. I must say, it was bittersweet and satisfying for me. If you love The First Law Trilogy, please continue to the standalone trilogy as well. Also, if you’re a fan of Western stories, this is something you don’t want to miss. Remember, I’m not a fan of Western stories and settings; the fact that I’m giving this novel a 4 stars rating means I’m giving it high praise. 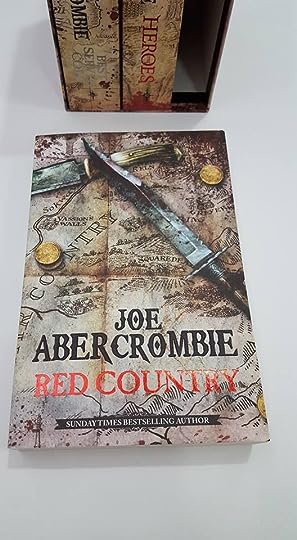