The Heroes by Joe Abercrombie

The Heroes depicted an unforgettable three days of intricate battles; Joe Abercrombie has once again proved himself to be my shining star in grimdark fantasy.

For me, there’s simply no one that can write grimdark fantasy as good as Abercrombie. The Heroes has been claimed by many Abercrombie’s fans to be his best book so far, and although I disagree because in my opinion that crown still belongs to Last Argument of Kings, I rank The Heroes as his third-best work so far. I loved it almost as much as I loved Before They Are Hanged, which is a LOT.

Picture: The Heroes by Raymond Swanland 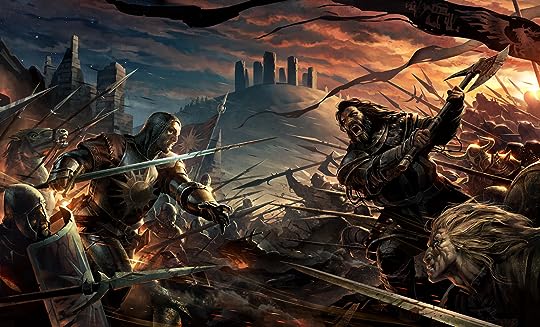 The year is now 584 AU, it’s been four years after the events in Best Served Cold. The entire setting of The Heroes takes place in The Valley of Osrung in the North, located between Uffrith and Carleon. The story revolves around the three bloody days of the climactic battle between the Union and the North. That’s it; this is the main plot of the book. The Heroes is thoroughly a military grimdark fantasy; Abercrombie doesn’t shy away from displaying the horror of war, both physically and mentally, to the participants of the battles. The preparation, the wars, plus the aftermath of each battle were written magnificently. It was utterly impressive how gradual the flow of the book felt; the intensity of the war became more palpable with each passing day.

There are no heroes in this book; each protagonist is a villain from the opponent’s perspective and vice versa. Although The Heroes can be read as a standalone, and it indeed has a self-contained story, I strongly suggest that you read The First Law trilogy and Best Served Cold first. This is crucial; many side characters from the first trilogy and Best Served Cold played a bigger role this time. Bremer dan Gorst, for example, has become one of the main POV characters in this book. There’s a huge cast of characters in The Heroes, and Abercrombie made sure to introduce the characters to the readers first. Readers need to feel invested in the characters first, and this, I feel, has been successfully delivered. As expected, Abercrombie’s characterizations towards his variety of characters—both returning and new characters—were incredible. The character development of the six main POV characters was outstanding; whether physically or mentally, almost every character in the novel ended up being changed by the three days of mayhem. There is no exception; war changes you.

“It is easy to forget how much you have, when your eyes are always fixed on what you have not.”

Terrific characterizations aside, one of the best strength of the book definitely lies within the stupendous battle scenes. Abercrombie’s masterful usage of consecutive perspective change exhibited the relentless coup de grace dealt from both sides of the armies brutally. This was also the first time I read a fantasy novel that utilized the view of war from the eyes of a common soldier, and they’re terrifying as hell. The action sequences felt incredibly cinematic; it’s brutal, visceral, and bloody thrilling. I’ve read plenty of epic/grimdark fantasy, and other than John Gwynne, no one else can write realistic and explosive close-quartet combat scenes—imbued with raw emotions—as good as Abercrombie does. Every action scenes were truly breathtaking; most epic fantasy books featured one climax sequence to conclude their story, but The Heroes featured five. Consisting of five parts, each part displayed a compelling vivid war or duel scenes. Combined with Abercrombie’s impeccable prose, The Heroes is filled with memorable and rewarding battle sequences.

Picture: One of the interior arts by Raymond Swanland for The Heroes Subterranean Press edition 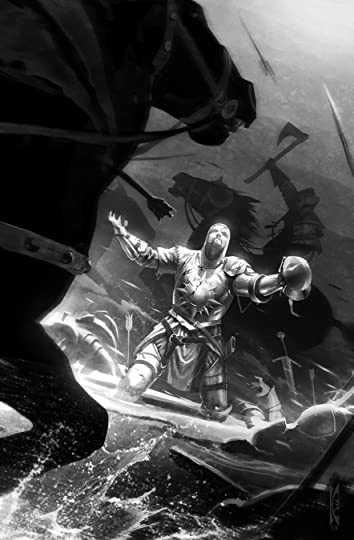 The first time I fell in love with grimdark fantasy novels was after reading The First Law Trilogy, and The Heroes will mark the fourth time his book entering my favorites of all time shelves. Thank you for reminding me once more why I love grimdark fantasy novels. All hail Joe Abercrombie, the Lord of Grimdark. I absolutely recommend The Heroes to fans of grimdark or military fantasy. I’m closing this review with this little beautiful quote or advice from the book that I think every one of us should always try to remember.

“Savor the little moments, son, that’s my advice. They’re what life is. All the little things that happen while you’re waiting for something else.”

Bonus Picture: My gorgeous UK paperback of The Heroes 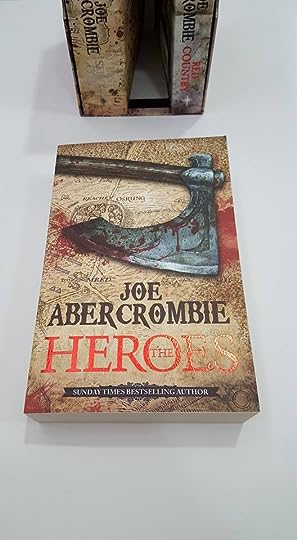