A magnificent tale of vengeance filled with bloody actions, betrayal, and humor.

“One cannot grow without pain. One cannot improve without it. Suffering drives us to achieve great things.”

I’ve postponed starting Best Served Cold, the first book in The First Law standalone trilogy by Joe Abercrombie, for almost a year now due to the reason that I thought it will pale in comparison to the first trilogy. I shouldn’t have doubted Abercrombie; Best Served Cold was exhilarating, and it’s certainly superior compared to many grimdark books published now. Best Served Cold takes place in the year 579 AU; two years after the events of Last Argument of Kings. It is now springtime in Styria, and that means war and revenge. The premise of the book is simple. Monza Murcatto has been betrayed by Grand Duke Orso, and the betrayal resulted in her brother’s death and her crippled state. Monza is now determined to assemble her own crew and assassinate the seven personnel responsible for the betrayal. It’s a revenge story similar to Assassin Creed II or Kill Bill, on steroids. The progression of the storyline in Best Served Cold felt more straightforward compared to The First Law trilogy, but this doesn’t mean it’s a bad thing. As you can expect from Abercrombie, he executed his narrative with brilliance by prioritizing distinctive characterizations and cinematic action scenes. Abercrombie successfully transformed this novel into an incredible story of tension, vengeance, and gore, but enriched with redemption and his trademarked humor.

Picture: One of the interior arts by Raymond Swanland for Best Served Cold Subterranean Press edition 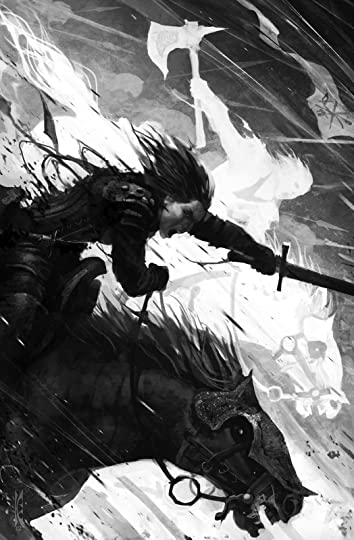 Amazing characterizations have always been one of Abercrombie’s greatest strengths; it is one of the most dominant factors that separated Abercrombie from so many grimdark fantasy authors. And Best Served Cold just proved this notion further. Within a single standalone novel, all six characters with POV chapters received their own background, distinguishable inner voice, unique personality, and superbly-written character development. I do think it will be immensely beneficial for you to read The First Law trilogy first before starting this one. Despite the novel being deemed as a standalone, a lot of characters—or someone related to them—from the first trilogy made an appearance here. For example, both Caul Shivers and Nicomo Cosca were supporting characters in The First Law trilogy and they became some of the main characters in this book. Personally speaking, Shiver and Cosca truly made this book shine, but if Abercrombie should receive a trophy, it is for writing Friendly—a murderer with an obsessive-compulsive disorder towards dice and numbers. I found Friendly to be incredibly compelling and humorous as a character; I absolutely loved reading his POV chapters.

“What do the dice say?”
Dice say nothing. They are dice.”
Why roll’em, then?”
They are dice. What else would I do with them?”

The dialogues and interactions between characters were insanely delightful and fun to read. Also, once again, Abercrombie exhibited his skill in delivering intricate and immersive action sequences effectively. Abercrombie’s prose never fails to pull me inside the chaos and conflicts; everything always felt so vivid when I’m reading his books. Rest assured that wars, duels, gore, and many other thrilling battle sequences exist in Best Served Cold.

Picture: One of the interior arts by Raymond Swanland for Best Served Cold Subterranean Press edition 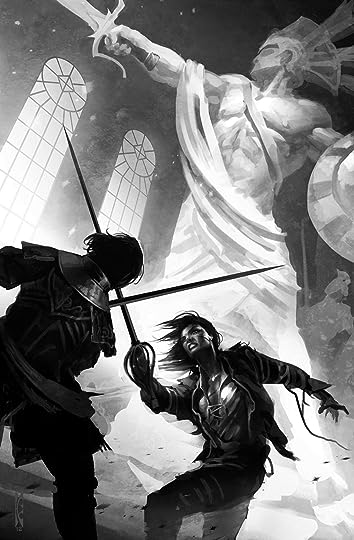 Excluding the spectacular characterization and action scenes, if you’ve read Abercrombie’s book, you would know that he’s a master of crafting memorable catchphrases. I’ll leave those phrases for you to find out for yourself. I would like to, however, direct your attention to these quotes to show how beautifully philosophical his prose can be, in addition to being gritty and witty.

“That was the difference between a hero and a villain, a soldier and a murderer, a victory and a crime. Which side of a river you called home.”

“Things aren’t what they used to be’ is the rallying cry of small minds. When men say things used to be better, they invariably mean they were better for them, because they were young, and had all their hopes intact. The world is bound to look a darker place as you slide into the grave.”

Frankly, the only factor stopping me from giving this book a full 5-stars rating was because of Monza Murcatto. One of Abercrombie’s talents as a writer is his ability to craft morally grey characters that felt genuine and lovable; despite their questionable actions, I couldn’t help but found myself rooting for them occasionally. I simply can’t attain that level of investment for Monza. She’s highly selfish, despicable, treated everyone that supported her like garbage. All she did was fuck, order her crew, blame everything on them, and much more. It’s probably intentional, and I do get that this is a grimdark fantasy series, but there’s no redeeming aspect to her personality. Fortunately, despite continuously hoping for retribution to visit Monza’s life, I also felt constantly motivated to find out how her story will proceed and end. I think that’s a testament to how good Abercrombie is. Plus, the multiple third-person POV narration ended up being hugely beneficial to my enjoyment of the novel. I don’t think I would’ve loved this book as much as I did if the entire novel was told exclusively through Monza’s perspective.

“You were a hero round these parts. That’s what they call you when you kill so many people the word murderer falls short.”

I’ll conclude my review here. The first volume of the standalone trilogy in The First Law World turns out to be a fantastic addition, and I honestly believe the overall series is better for it. Contrary to my initial pessimism, Best Served Cold was an indisputably impressive revenge story. If you’re a fan of The First Law trilogy, do not stop there; continue to Best Served Cold. You might find yourself surprised by how awesome it was like I did. After all, you can’t ever have too many First Law novels, right? 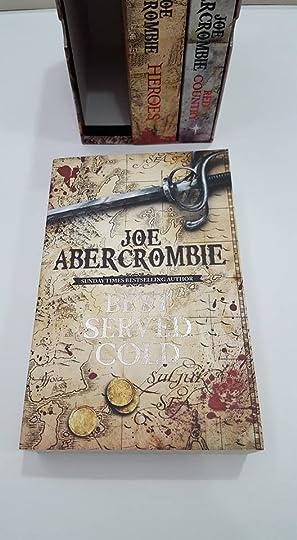