The Lies of Locke Lamora by Scott Lynch

The Lies of Locke Lamora is a double fuckdamn for me. First, for postponing reading this book for such a long time. Second, Scott Lynch’s capability to successfully craft such an incredible debut exceeded my expectations.

“There’s no freedom quite like the freedom of being constantly underestimated.”

Together with The Name of the Wind by Patrick Rothfuss and Malice by John Gwynne, The Lies of Locke Lamora—the first book in the Gentleman Bastard sequence—has become one of the best debut novels I’ve ever read so far. This and the other debuts I just mentioned are completely different from each other in terms of content and writing style, but quality-wise they’re all the same: exceptionally stunning.

Picture: The Lies of Locke Lamora by Edward Miller 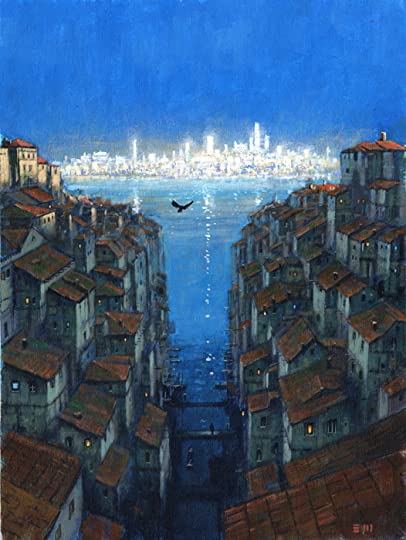 In The Lies of Locke Lamora, we follow a group of elite con artists called the Gentleman Bastards. Led by their leader, Locke Lamora (the infamous Thorn of Camorr), the story begins with the gang trying to pull off the biggest heist they ever attempted. This heist, as you can probably predict, eventually lead them into something much bigger and dangerous than what they’ve signed up for. There was no shortage of dark humor and profane langue thrown around, and at first, this might cause you into thinking that this is a light-hearted book. But as the story progressed, the tone of the story increasingly turned darker, and the complexity of the storyline improved; the intensity of the plot grew gradually towards reaching a marvelous climax sequence. Equally plot and character-driven, Lynch has created a multi-layered narrative within his unforgettable debut, and every recipe required for a compelling heist fantasy was fulfilled. I personally think that The Lies of Locke Lamora could, and would’ve, worked magnificently as one standalone novel. If Lynch had decided to not continue the series after this, I honestly would’ve been satisfied with what I’ve read here, and I also would’ve called this one of the greatest standalone novels—with no sequels—of all time. However, knowing that the Gentleman Bastard sequence is planned to be a seven-book series, I will rejoice and cheers to that fucking grand menu. We’re only at the appetizer here, we still have a full course to look forward to, and the taste has been spectacularly delicious already.

“You’re one third bad intentions, one third pure avarice, and one eighth sawdust. What’s left, I’ll credit, must be brains.”

The storytelling structure is arranged in a slightly similar fashion to The Kingkiller Chronicle by Patrick Rothfuss. This doesn’t mean there’s a chronicler in the present timeline writing Locke Lamora’s life here, but the narrative did shifts between the present and the past timeline. However, contrary to The Kingkiller Chronicle, the jumping back and forth between two timelines definitely happened more frequently within The Lies of Locke Lamora. The Interludes sections function as the past timelines, and these Interludes occurred at the end of almost every chapter. I loved the Interludes chapters; Lynch used the Interludes sections to terrifically cultivate the character’s background, personality, and developments. And, to sweeten things even further, several aspects of the world-building were also explored within these chapters. The juxtaposition of these two timelines created a superlative result in bringing a superbly-written story enhanced by incredibly addictive pacing. Seriously, the relatively slow start to the novel signified the calm before the storm; after one hundred pages, it was pretty much impossible for me to stop reading as the plot thickens. I actually read three hundred pages of the book within a day right after I got back from work. Sleeping hours were sacrificed, and did I regret it? No, I’ll gladly do it again on my future reread of this book. 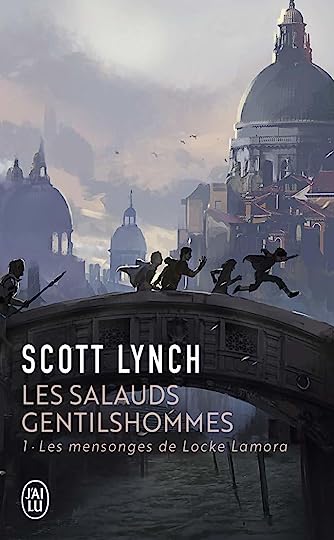 The Gentleman Bastards is one of the most lovable gangs I ever had the pleasure of knowing out of every storytelling medium. The six individuals trained by Father Chains that formed this group consists of Locke Lamora (the garrista/leader of the group,) Jean Tannen (the brute,) Calo and Galdo Sanza (the jack-of-all-trades identical twins,) Bug (the overlooked young apprentice,) and Sabetha (she didn’t make an appearance in this book) were characters that made me feel invested in their journey. Their genius scheming, their engaging interactions, and the wholesome brotherhood they have with each other was immensely entertaining. Just within the first one hundred pages, I was already head over heels with these characters. Laughing while reading a high fantasy novel can be considered a rare occasion for me, and these characters managed to pull that off several times throughout the whole book with their amazingly humorous banter. I was going to put a quote here, but I think it would be better for you to read and find out by yourself; they’re all golden. 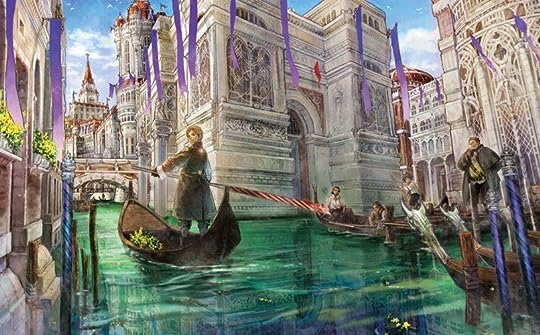 One brilliant thing to note—among many—about Lynch’s prose is the creativity in profanity. There’s a myriad of swearing, cursed words, and mockery I never even had the imagination to ever think of; this book is pretty much filled with them. I personally loved them; they were eloquent, full of sass, and highly appropriate for the overall story and setting of the book. Profanity included, I found Lynch’s prose in every factor of the book to be intricate and well-delivered; the heists, the brutal actions, the dialogues, the politics, and the settings were all vivid in my mind’s eye.

“We’re a different sort of thief here, Lamora. Deception and misdirection are our tools. We don’t believe in hard work when a false face and a good line of bullshit can do so much more.”

I can’t stress this highly enough, the world-building was brilliantly detailed. The setting in The Lies of Locke Lamora takes place in the city of Camorr, a city inspired by medieval Venice with its canals and Falselight—lights that illuminate the city during a period of the night. The setting, mixed with elements of high fantasy, was gorgeous and breathtaking. With the addition of the bloody history of Camorr, the stylish fashions plus the intricate description of food, liquors, appearances, and tastes, Lynch did a fantastic job in bringing the world-building and the city of Camorr to life. Being in Camorr with these characters played a huge factor in why I’m enamored with this book, and I will definitely revisit this place again in the future. 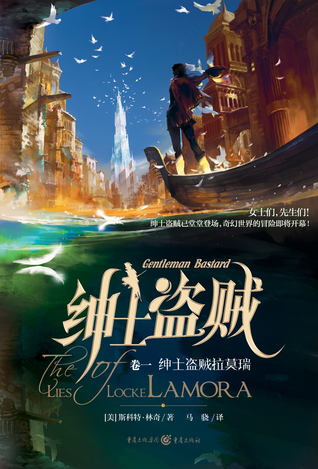 I could probably end this review by telling you that this book is overrated, or maybe I could tell you that it didn’t meet my expectation, but these statements would belong in a gallery of blasphemy called The Lies of Petrik Leo. Truthfully speaking, this cleverly crafted book deserves all the fame and praise it has received, and more. The Lies of Locke Lamora is effortlessly one of the best debut novels I’ve ever read, simple as that. It will be difficult for the rest of the series to top this one, but I’m definitely eager to find out. I’m keeping my fingers crossed that the rest of the series will continue to awe me with the same quality of ingenious content that never fails to steal my attention from cover to cover here. I absolutely recommend The Lies of Locke Lamora to every reader of adult high fantasy. Original, engrossing, emotional, and devastatingly impactful; this extremely well-written tale of avarice and brotherhood is a treasure of gold, and you will want your share of it.

“To us — richer and cleverer than everyone else!”