For better or worse, Small Favor is a fully action-packed packed—have I mentioned packed?—volume.

To the longtime fans of the series, here’s a brief reminder that Peace talks, the long-awaited sequel in The Dresden Files> series, is out now! As for me, I’m still slowly catching up. I actually wish I can prolong my speed, but it seems likely that by October or November, I’ll be fully caught up with the series.

“Punctuality is for people with nothing better to do.”

Just when he thought his life is looking up, everything seems to be at peace, but then the past visits. Mab, the Queen of Air and Darkness, calls in an old favor from Harry Dresden, and immediately all hell breaks loose. There’s a lot going on here; Were-goats, the Archive, the Knights of the Cross, Marcone, Mab, and last but not least, Nicodemus and the Denarians. Suffice to say the life for Harry and his friends are imperiled once again. Small Favor, the tenth volume in the series, is an installment full of actions. If you’ve been following my reviews, you know how much I enjoyed reading The Dresden Files, but at the same time, you’re also probably sick of me criticizing the pacing of its action scenes in some volumes. Unfortunately, this novel by far the most action-packed volume of the series so far. There was almost no room for breathing, and this was especially true in the middle section of the book, and I have to say that it did bore me a bit.

“Think of every fairy-tale villainess you’ve ever heard of. Think of the wicked witches, the evil queens, the mad enchantresses. Think of the alluring sirens, the hungry ogresses, the savage she-beasts. Think of them and remember that somewhere, sometime, they’ve all been real.

With this series, I definitely prefer when there are breaks and room for breathing rather than continuous actions. Butcher has an engaging and straightforward writing style, and the formulaic storytelling structure does make long action sequences boring because most of the time, we’ll know the result of the battles already. I love The Dresden Files more when the actions are spread out; as I said, the best part of The Dresden Files is when Butcher focusses the narrative on Harry and the development of his relationships with the important people in his life; that’s what Butcher did in the second half of Small Favor, and it worked really well for me.

We’re halfway through July now, and honestly, I’ve been having a rut of a reading month. So far, I’ve had two DNF, and the last three books I managed to finish were either disappointing or just okay. As a matter of fact, the last book that I enjoyed thoroughly was the previous installment to Small Favor: White Night. Small Favor brings back old enemies while developing the characterizations of the cast of characters further with engaging dialogues and cool action scenes. I’m pleased to once again add another book in The Dresden Files to the list of great books I read this month.

“You rush a miracle worker, you get lousy miracles!” 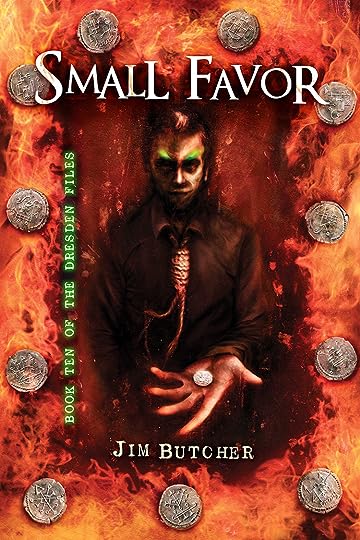