I’ve mentioned this several times, but it’s always safe to rely on The Dresden Files for a quick entertaining read.

A serial killer is on the loose, and they’re targeting practitioners of magic. And to make things worse, all the evidence seems to point towards Thomas as the perpetrator. Harry Blackstone Copperfield Dresden, of course, won’t allow this to happen. That’s the premise of White Night, but surprisingly, there’s actually less focus on investigation now compared to the previous books in the series. I personally consider this a good direction for the series; I’ve always preferred reading about the magic or world-building aspect of the series more than the investigation parts anyway. I found White Night to be as good as Dead Beat in overall quality due to few reasons.

“People love dogs. You can never go wrong adding a dog to the story.”

That’s not what I’m going to talk about, but that’s not wrong. Yes, Mouse is here, and he’s still the goodest boy. If you’ve read and enjoyed the series up to this ninth installment, then you should know already that the series is filled with tons of endearing cast of characters with well-put characterizations and developments, but they take turns in each volume. Sometimes a character appears, sometimes they don’t. In White Night, most of the relationship development occurs between Harry, Molly, and Ramirez—another character I didn’t expect I would find myself invested in this much. As I repeatedly said throughout my reviews, the surprisingly delightful characterizations for Harry, the side characters, and their development with each other is one of the biggest selling points of the series for me, and that remains true in this book. I also utterly loved the discussion and passages about power, loneliness, and pain.

“Everyone is down on pain, because they forget something important about it: Pain is for the living. Only the dead don’t feel it.”

Then there’s also this line, which probably would—sadly—continue to be evident until the world explodes:

“Bigots see something they expect and then they stop thinking about what is in front of them. It’s probably how they got to be bigots in the first place.”

Isn’t it so true?

Speaking of being pleasantly surprised earlier, I actually liked reading the action sequences here. It never felt boring, and wow, the battle against the ghouls did get crazy. For me, the pacing and longevity of the action sequences in the series have always been a persisting issue; Dead Beat was the only time I can say I thoroughly enjoyed reading every action and battle scenes within a volume of the series. It feels good that I can finally add another installment to that small list. The actions in the last few chapters of this novel were gripping, and I definitely hope this level of quality in the actions will be maintained or maybe even surpassed in the sequels.

“Knowledge is the ultimate weapon. It always has been.”

White Night has the most satisfying ending in the series so far. Not only the case file felt properly concluded, but the ending also made me smile. (I mean, c’mon, there’s even a Tiger Balm! That’s something I use that I thought would never appear in an urban fantasy novel!) Suffice to say that overall, same as Dead Beat, White Night is one of my favorite installment in the series so far. I’m sure this position won’t last long; at the rapid rate the series is ascending in enjoyment, I’m confident the next book will be as good or maybe even better. I’ll start reading Small Favor two weeks from now. 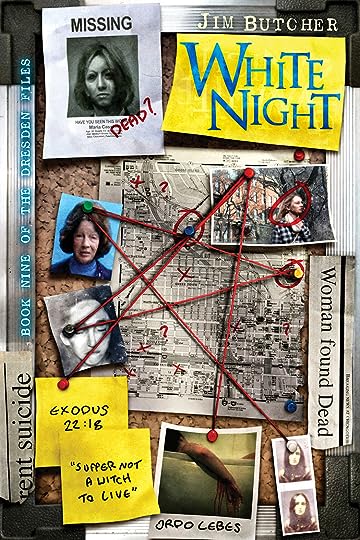