Summer Knight was super fun, and I expect the quality of the series can only stay consistently good or better from here on out.

When you’re diving into a long series that has been published for years—two decades for this series—I find that it is almost always a wise decision to listen to the advice given by the fans of the specific series—especially those who can acknowledge the flaws in their favorite books/series—who definitely knows what they’re talking about. This is where Summer Knight, the fourth book in The Dresden Files, enter the scene. It has been agreed by the majority of The Dresden Files fans that The Summer Knight is where the series started to take off, and I can certainly understand why now.

The story in Summer Knight starts nine months after the end of Grave Peril. We have seen a big focus on werewolves in Fool Moon, vampires in Grave Peril, this time we have faeries taking the central stage. I don’t know about you, but I never expected I would enjoy reading a fantasy novel that revolves around Faeries; I always say that any type of story can work as long that the author knows what they’re doing, and Butcher nailed it. It’s almost as if the previous three books were set-up for The Summer Knight to work better as an installment to a series. There’s a better sense of continuity in this book compared to the previous three. I don’t think you’ll feel lost starting your journey from Storm Front, Fool Moon, or Grave Peril; there’s a continuity in these three books but their story felt quite disjointed from each other. The three books before this novel felt like a prelude to Summer Knight, and that’s—in my opinion—only one out of several reasons why this is a better book than its predecessors.

“In the name of the Pizza Lord. Charge!”

I mean, that is one glorious line.

Another reason why Summer Knight is superior is that there are a better structure and flow to Butcher’s storytelling. The new murder mystery that Harry has to solve in this book was more interesting because the stake is higher and it involves more paranormal/magic. The ebb and flow in the cycle of power between the Summer and Winter faeries made the conflict and rivalry between them more intriguing and compelling. Also, all the new characters being introduced here were fascinating to me. Aurora, Titania, and Mab—the Queen of Air and Darkness—were faeries that tightened the tension and plot of the story. Most importantly, for the first time in the series, I actually felt invested with many of the characters, not exclusive to Harry Dresden, Bob, and Michael—even though he’s not in this book—now.

It gave me so much joy to see Harry and Murphy started to form a better understanding with each other and cooperate more harmoniously. The way Butcher portrayed their friendship in the previous books didn’t work too well for me; it made Murphy an infuriating character because we see things from Harry’s POV. Also, Harry’s chauvinist tendency seems to have decreased or not mentioned anymore. This is a good change; it’s better to see him being protective rather than to hear his thoughts and justification for being chauvinist repeatedly. Characterizations and relationship developments simply functioned better in this book, and I can’t wait to see how all their relationships develop in future books.

“Here’s where I ask why don’t you spend your time doing something safer and more boring. Like maybe administering suppositories to rabid gorillas.”

Summer Knight is the most enjoyable book in the series so far, and the flow of the pacing and writing in it was incredibly delightful to read. The action scenes in the middle part of the book did feel slightly too long for its own good, but other than that, everything was just addictive. Butcher’s accessible prose continues to really make this series an entertaining page-turner, and I look forward to reading the next book next month. 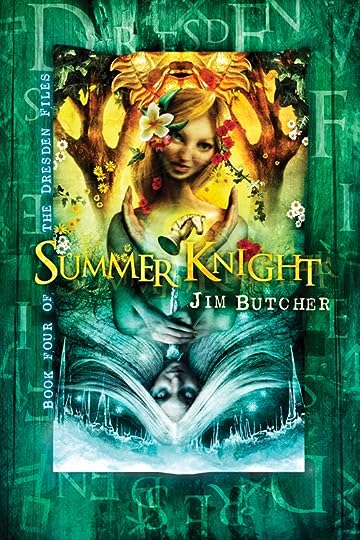