I will level (pun fully intended) myself with you; this was by far the most badass and engaging LitRPG I’ve ever read.

Some of you may already know that I’m a huge fan of manga/manhwa; I’ve been reading it since I was a kid, and I will always continue to do so. I don’t usually post a full-review of a manga/manhwa series I’ve read here, but Solo Leveling demands, at least, a little write-up because my god, everyone needs to bless their eyes and mind with the entertaining experience of reading this. It takes a lot for a manga/manhwa series to blow my mind now, and Solo Leveling accomplished this feat non-stop.

Solo Leveling is a manhwa adaptation—illustrated by Gi So-Ryeong (기소령) and Jang Sung-Rak (장성락)—of a completed series of light novels with the same title that’s written by Chu-Gong. The official blurb from the light novel did a great job of explaining the premise without spoiling anything, so I’ll copy it here:

“10 years ago, after “the Gate” that connected the real world with the monster world opened, some of the ordinary, everyday people received the power to hunt monsters within the Gate. They are known as “Hunters”. However, not all Hunters are powerful. My name is Sung Jin-Woo, an E-rank Hunter. I’m someone who has to risk his life in the lowliest of dungeons, the “World’s Weakest”. Having no skills whatsoever to display, I barely earned the required money by fighting in low-leveled dungeons… at least until I found a hidden dungeon with the hardest difficulty within the D-rank dungeons! In the end, as I was accepting death, I suddenly received a strange power, a quest log that only I could see, a secret to leveling up that only I know about! If I trained in accordance with my quests and hunted monsters, my level would rise. Changing from the weakest Hunter to the strongest S-rank Hunter!”

It’s a simple premise, nothing revolutionary, but it’s executed magnificently; Sung Jin-Woo’s journey in his endless pursuit of a stronger power was simply a blast to read. And I’m not saying that the manhwa is without its flaws. The author seemed to have forgotten—for almost 50 chapters—that the reason Sung Jin-Woo became a hunter in the first place was to earn money to pay for the medical expense of his sick mother. Plus, Sung Jin-Woo is just extremely overpowered. But you know what? I don’t care. This manhwa is a personification of badass main character and action scenes, and everything worked well for the story and medium; I’m willing to overlook the minor flaws in favor of the powerfully engrossing and immensely addictive reading experience. Also, I loved the nod to other popular franchises: One Punch Man training method, Alex Armstrong from Full Metal Alchemist cameo, and the design of Artorias the Abyss from Dark Souls. I could be wrong about these, of course, but they seemed too similar to be considered a coincidence, especially the later story arc resemblance to the Chimera Ant arc from Hunter x Hunter. Case in point: 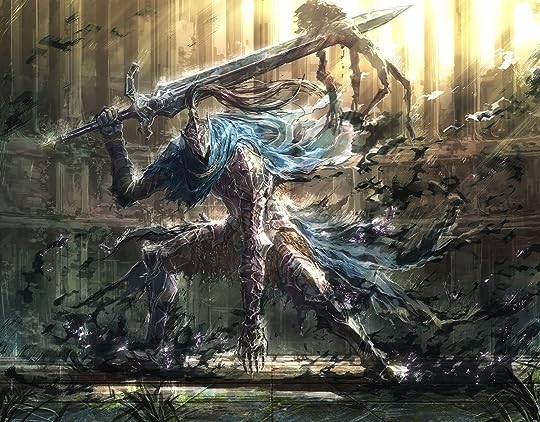 Gee So-Lyung is a virtuoso of illustrations; I truly believe that the reason this manhwa reaches the popularity and acclaim it has now is due to his irreplaceable contributions as an artist. The level of explosive actions and vivid artworks displayed in this manhwa, for the lack of a better term, is godlike. A picture is worth a thousand words, and rather than hearing me ramble on about how beautiful and well-drawn the illustrations are, I’ll provide proofs instead: 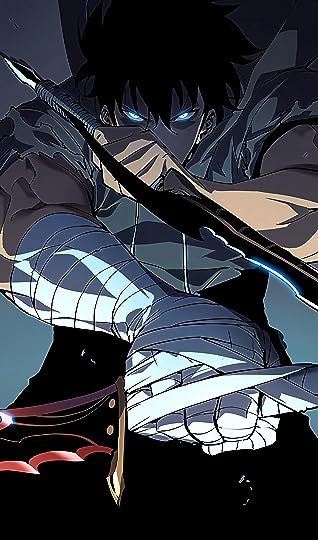 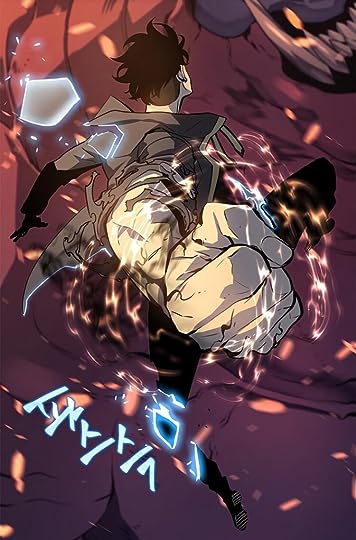 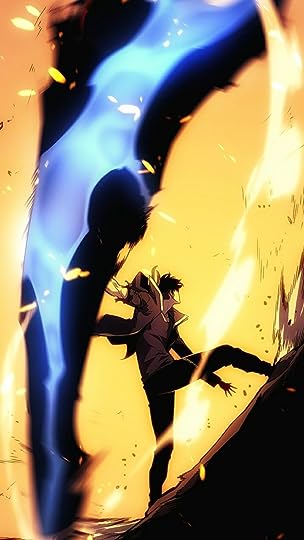 Yes, every single panel of this manhwa is drawn with at least the superb caliber shown above.

Solo Leveling is an outstandingly phenomenal manhwa that deserves all the praises it gets and more. Forgive me for saying this, but Season 1 of this series alone has made every other LitRPG I’ve ever experienced pale in comparison. Seriously, I honestly never thought I would ever read a LitRPG as addictive, mind-blowing, and page-turning as this, but here we are. I highly recommend this to pretty much everyone. Only Season 1 has been completed at the moment, but trust me when I say that this manhwa is going to take over the world. Join in the hype now. I can’t wait for Season 2 to begin and see the—hopefully—terrifying challenges the Sung Jin-Woo encounter.

Solo Leveling fell onto my lap unexpectedly (thanks to Petrik) and before I knew it, I was utterly addicted to this incredibly entertaining and ridiculously absorbing manhwa that boasts of some the most insanely epic and amazing artwork I’ve seen.

Well, truth be told, I’ve only read one manga before this, and it was the ingeniously brilliant Death Note. The artwork for Death Note was already superb in my opinion, but the drawings in Solo Leveling was frankly on a totally different level (pun entirely intended). And I also have it on the best authority available to me that very few titles out there have the same quality of artwork as this one (yes, it’s Petrik again).

The story in Solo Leveling could be said to be quite unoriginal and tropey, but regardless I was hooked and went out of control binge-reading it.  It took over all my reading attention for about a day and a half, and even now, I couldn’t stop thinking about it. Set in a world where Gates that connect to Dungeons of monsters started appearing, certain powers have awakened in some of the human race to enable them to fight these monsters. The humans who fight monsters are called hunters, who are grouped into raids and divided into roles like tanks, damage dealers, mages and healers.

Our main protagonist, Sung Jin-Woo, was an E-rank hunter, the lowest rated hunter who was so weak that he’s even known as the “World’s Weakest”. However, given his situation at home he needed to make the money that hunters could earn by risking his live fighting monsters in low-levelled dungeons. After a dangerous and catastrophic raid at an unusually challenging D-ranked dungeon, Jin-Woo gained an ability that appears to be uniquely available only to him. This is where the title of the story came from. All hunters are awakened at a predetermined rank (which denotes the magical power innate to the person), and nothing can change that ranking. Jin-Woo now, however, has the ability to level up from experience and he sets out on a personal quest to become as powerful as he could possibly be, battling more and more powerful creatures and monsters.

Jin-Woo becomes a cliched, overpowered main character, but O-M-G it worked so darn well.  Seriously, the fight scenes in this manhwa progressively becomes more epic as Jin-Woo’s badass-o-meter (and hotness) just kept getting higher and higher. The artwork was the primary reason why it was so well-executed. The badassery was off the charts and I lost count of how many times I’ve flailed from the sheer epicness of the story told through the mind-blowing visuals. Scenes were rendered in vivid brilliance, as the dynamism from the drawings and flow of the panels gave the action a palpable sense of underlying motion. I could not say it enough, the artwork was absolutely amazing!

The story has its flaws but at the end of the day, I had way too much fun to nitpick over the details. Highly recommended for any fantasy and/or LitRPG reader, especially if you have an appreciation for artwork.

Highly entertaining and captivating from beginning to end, Solo Leveling is almost unputdownable and will have you speaking that oft broken promise, “Just one more chapter”, repeatedly.

The story takes place in a world where gates randomly open up that are filled with all kinds of monsters, beasts and demons. When the gates first started appearing, some humans began displaying various powers and became hunters, classified according to their varying strengths. These hunters use their powers to clear the gates by defeating the evils within, and thus prevent the monsters from entering the world.

Our main character, Sung Jin-Woo, is such a hunter. Unfortunately for him, he is known as The Weakest hunter, and is classified as E-class – the lowest possible rank. While he is quite a bit stronger than a regular human, he is no match for other hunters or any of the monsters dwelling within the gates. When disaster strikes during the clearing of one such gate, Sung Jin-Woo gains a power that allows him to become a stronger hunter, setting his first steps upon the path to becoming a major badass and in the process changing his life in every possible way.

Solo Leveling is as addictive as they come. There are fist-pumps and goosebumps and HOLY CRAP moments galore, and while the story is pretty basic, it’s the artwork that truly elevates this tale to something special; sinking it’s hooks into you and never letting go from one B A D A S S moment to the next. Every scene, every monster, every battle is a delight. All illustrated in detail and beautifully so. Whether it is the sheer chaos of a high speed fight or the horror of a hideous monster, every image is wonderfully immersive; conveying entire scenes perfectly in a glance and never ceasing to deliver a feast for the eyeballs. This is as binge-able as it gets. Go on. You know you want to.