Harry Blackstone Copperfield Dresden has a new case to solve: The werewolves are here.

Fool Moon is the second book in The Dresden Files series by Jim Butcher. Although the story takes place six months after the end of Storm Front, I do think that it worked great as a standalone. If someone was to, accidentally, start their journey with the series from here, I doubt they’ll feel like they miss anything crucial. As far as the quality of the book goes, I’ll say that this is slightly weaker the first book, and the overall reading experience still aligns with my expectations; I did enjoy Storm Front more, though. Since I posted my Storm Front review, many people have mentioned to me that Fool Moon is one of their least favorite book of the series. I’m still very early into the series, but I’m inclined to agree that this, at least, wasn’t as enjoyable as the first book.

“Alone. It’s one of those small words that means entirely too much. Like fear. Or trust.”

It doesn’t mean that I didn’t have a good time reading it; I did. Fool Moon was readable, but in my opinion, it wasn’t as page-turning as Storm Front, and I wasn’t bored with this novel but I also never had the feeling of eagerness to continue reading whenever I put the book down. It felt to me as if I was reading this book just to make sure that I don’t miss anything important before I get to the good installments of the series.

“There’s more magic in a baby’s first giggle than in any firestorm a wizard can conjure up, and don’t let anyone tell you any different.”

There are several things to learn in this book, though. Readers learn more about Harry’s magic, his deepening relationships with Murphy and Susan, and his attitude and personality. Plus, we also get to learn a bit about Harry’s mother. However, the clash between Harry’s tendency of being chauvinist and Murphy’s reluctance towards being protected did get annoying and repetitive after a while. Fortunately, this wasn’t something that went on too long; Fool Moon is action-packed, and the majority of the pages were spent on actions rather than bickering. My favorite part of the book was definitely the intense last few chapters of the novel; the climax sequence was very well-written, and I hope this is a taste of the greatness to come in future sequels.

“My magic. That was at the heart of me. It was a manifestation of what I believed, what I lived. It came from my desire to see to it that someone stood between the darkness and the people it would devour.”

I’m very thankful for readers and fans of the series who have encouraged me to be patient with the early parts of the series. Overall, I do think that Fool Moon is a good sequel to Storm Front. If what the majority of the fans of the series claim is true, I should be only one book away from the series to hit the real “beginning” of its glory. 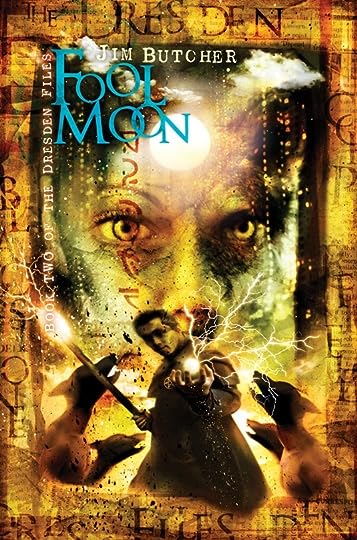