Storm Front is an introductory and page-turning installment to a beloved urban fantasy series.

I am not much of an expert on urban fantasy sub-genre, I certainly haven’t read as much urban fantasy compared to high fantasy, and almost all of the majority of urban fantasy series I’ve thoroughly loved has been UF series that took place in a fictional world rather than ours; The Green Bone Saga by Fonda Lee and The Divine Cities trilogy by Robert Jackson Bennett are a great example of this. Many trusted readers and friends of mine who understands my reading taste, however, have convinced me that if there’s one urban fantasy series—with a contemporary setting—that I would end up loving, it’s The Dresden Files by Jim Bucher. Well, here I am, I’m officially starting my journey with this series.

“There is no truer gauge of a man’s character than the way in which he employs his strength, his power.”

Storm Front is the first book in The Dresden Files by Jim Butcher, and we follow Harry Blackstone Copperfield Dresden—the only Private Investigator that’s also a Wizard in town. If I’m not mistaken, this series is planned to be 23 or 24 books long. Storm Front is without a doubt an introductory installment to a long series. Many huge fans of the series have warned me that it takes three or four books for the greatness of the series to truly “begin.” I honestly expected this book to be much worse because of this, but as it turns out, I actually thought that Storm Front was very enjoyable to read.

“I don’t want to live in a world where the strong rule and the weak cower. I’d rather make a place where things are a little quieter.

Many readers have voiced criticisms that the first three books are very typical and formulaic by today’s story standard, and yes, that is true. I haven’t read the next books yet, but at least as far as the first book goes, I can’t deny their claim. But, we do need to go back a bit and put some things in perspective here. Storm Front was first published twenty years ago.

Let that sink in for a while.

I wasn’t even in middle school yet when this book was first published! Now I’m reading this in a time of a pandemic. Maybe instead of calling the first three books to be unoriginal because of the formulaic story structure, it would be more apt to say that Storm Front and The Dresden Files series to be—at least one of—the perpetrator responsible for popularizing that formula within the sub-genre in the first place.

“Where instinct fails, intellect must venture.”

I’m not saying that this book isn’t without its issue, it will not blow your mind, but even putting modern storytelling standards into account, I can’t deny that I had a great time reading this short book. Storm Front is a fun and quick read that introduces Harry Dresden, the characters, the magic, and the world-building within a compelling murder mystery plot nicely. Oddly, I didn’t click with Butcher’s Codex Alera series; I haven’t continued the series past the first two books, which is odd because Codex Alera is a high fantasy series—my favorite sub-genre to read. As for The Dresden Files, if Storm Front is indeed the weakest book of the entire series, it seems like we’re going to have a lot of fun adventures together, Harry Blackstone Copperfield Dresden. 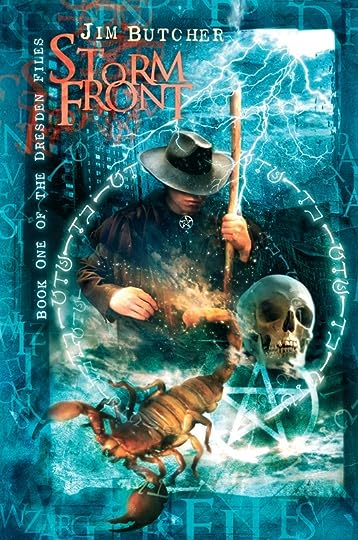