The Broken Eye is the third—and the second largest—book in the Lightbringer series by Brent Weeks; it’s quite crazy to think that this is the third book already and yet I still found myself constantly surprised by the revelations, plot twists, and developments. I’ve mentioned this before, there aren’t many high-fantasy series with a plotting level that reached what Weeks achieved with this series. On my reread, the benefit of hindsight allowed me to witness the hidden breadcrumbs planted into the previous two books that weren’t possible on my first read. I can’t stress this highly enough, as far as the expansion to the plotline and lore of the series goes, The Broken Eye contained a lot of crucial information surrounding the mythology and secrets that have been mentioned several times in the previous two books. The prophecy of the Lightbringer, Diakoptes, Orholam, the Nine Kings, the Order of the Broken Eye, Paryl drafting, & the Blinding Knife; all of these are wonderful and, honestly, needed additions to the series which I’m sure will end up being super important for the remaining of the series. 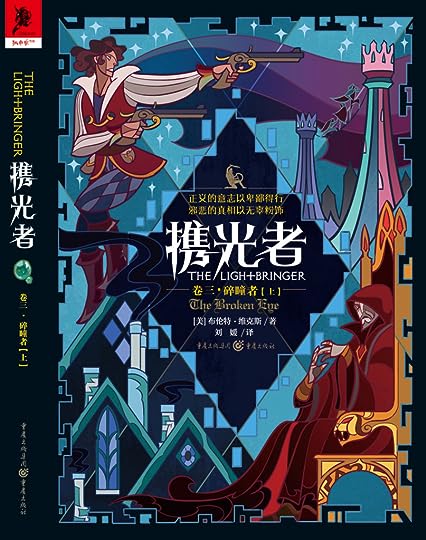 Due to the fact that this is the third book of the series, I’m going to refrain from talking about the plotlines to avoid spoilers; I would instead talk about why I loved this book. Majority of the reasons why I loved The Broken Eye were because of the character developments given to the characters, mainly regarding their storylines, abilities, and motivations. Kip and Teia, in my opinion, are the two central characters in The Broken Eye. Although it’s true that in The Blinding Knife Kip had the most perspective chapters to read, even more than Gavin, the story could still be interpreted to revolved heavily around Gavin; this isn’t the case in this book. Almost every major revelations and story progression in this book happened because of Kip. I find this to be quite astonishing; Kip has grown a lot since his first appearance in The Black Prism. He’s now physically stronger, he’s considerably more mature, and he’s gradually learning what it means to be in charge of his life and friends. Seeing how much he changed because of the harsh events forcefully put upon him in the previous two books was the highlight of this book, and maybe even for the rest of the series. It’s satisfying to read about his relationship with Gavin, Andross, Karris, and of course, his friends in the Blackguards.

“Don’t judge a man by what he says his ideals are, judge him by what he does. Look at what the Color Prince has done. They’re wrong, Teia. They’re liars and murderers. It doesn’t mean everything we do is right. It doesn’t mean our house doesn’t need a thorough cleaning. I just don’t think we need to burn it to the ground to do it.”

I also loved how Kip’s story powerfully connects to Teia’s incredible character development. I’ve mentioned that Teia is the best female character of the series in my previous review, and The Broken Eye amplified this notion. Not only she’s the second character with the most perspective chapters, Teia goes through a lot of struggle here, not only physically but mentally and I also found her relationship development with Kip and Karris to be incredibly fun and engaging to read. Plus, it was immensely intriguing to see her develop her paryl drafting abilities even further. The magic system in Lightbringer is complex, multi-layered, and intricate; Weeks did an amazing job in coming up with the magic system of this series, but paryl—plus one luxin I shall not name for now—drafting, in particular, was outstandingly crafted. It’s the aptest style of magic for espionage and assassins; I haven’t read The Night Angel trilogy by Brent Weeks but I’ve heard that it’s a fantasy series with assassins and ninjas as the central focus so this might’ve played a role in enhancing the quality of the sections surrounding spying, deceptions, espionage, and assassinations in this book.

“This world has only two kinds of people: villains and smiling villains.”

Contrary to what we’ve read in the previous two books, Gavin didn’t have many chapters to read here. His palms are sweaty, knees weak, arms are heavy, Gavin is going through hell. As if there hasn’t been enough damage inflicted upon him, Weeks put him through hell even more in this book. The fact that Gavin doesn’t have many POV chapters doesn’t mean that he’s not important. By this point of the series, his presence and role within the overarching narrative and complexities of the world have become too pivotal to dismiss; every piece of new revelations from his past is something that’s utterly worth remembering going forward with the series, and I’m super excited to find out how it all unfolds. All the other characters, Karris, Ironfist, and the member of the Blackguards, also weren’t neglected; Weeks made sure that every character that has appeared in the series so far has a role instead of just a side character that appeared a few times, and then forgotten.

“This is how tyrants fall. By destroying their people, they destroy themselves.”

As I mentioned at the beginning of this review, The Broken Eye is a book that focuses its narrative on secrets, espionage, and revelations; light cannot be chained, and the same can be said for the truths. The Broken Eye serve as a remarkable halfway point of the series; it provides answers, raises questions, and it shifts the storyline towards an unpredictable fate for the characters. I loved The Blinding Knife slightly more but it doesn’t change my opinion that the plot and quality of the three books in the series so far have been splendid. Only two books left in the series now, I will continue my binge reread onward to The Blood Mirror immediately.

One thought on “Book Review: The Broken Eye (Lightbringer, #3) by Brent Weeks”