Rereading is always a fascinating experience for me; I won’t lie that I have my share of issues—mostly due to overwhelming TBR and unfinished series I’m stuck in—with the idea of rereading just for the sake of refreshing memories in order to be able to appreciate the next/last book of a particular series. However, statistically speaking, rereading a book/series actually deliver a superior reading experience compared to my first read-through more often than not; The Black Prism is another great example of this situation, and it makes me wish I have more time to re-read many books that I’ve read before. The first time I read through this book, I found the first 200 pages quite a struggle to get through; on my reread, I’m actually surprised by how much I enjoyed the section that I found difficult to read. I can’t pinpoint the exact answer behind this change in reading experience; it could be because I’m a more well-seasoned high fantasy reader compared to before, it could be because I found the learning curve too steep back then, or maybe it’s all simply because I’m on my reread and I have the benefit of hindsight. One thing I can say for sure though is that I can appreciate the intricacies and subtleties of The Black Prism on my reread. 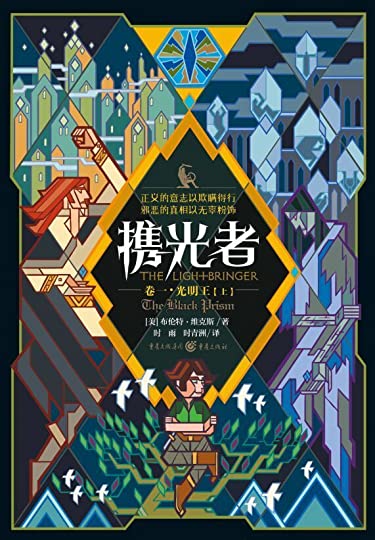 The most important thing you have to know before you read The Black Prism is that there’s a lot of things to learn and remember here, and I’m not just talking specifically about this book. Lightbringer is a high-fantasy series that’s complex, rich in world-building and lore, accompanied by a deeply intricate magic system—Chromaturgy—that, in my opinion, is on par with Sanderson’s. It has been years after I finished reading through the available books of the series, and I don’t think I’ve read many high-fantasy series that made the implementation of their magic system so undeniably crucial to every aspect of the world as much as this series does. From the plot progression, combat scenes, weaponry, infrastructure, method of transportations, and many more; it’s frankly mandatory that you, as a reader, understand how the magic system actually works. The downside to all of this would be that if this is your first time reading through this novel, the first 200 pages might end up being a bit of a learning curve because Weeks’ method of exposition can be a bit info-dumpy but necessary; I strongly advise you to persevere through it, the rest of the book is so worth the learning curve that gradually gets easier as the story progressed.

“Moments of beauty sustain us through hours of ugliness.”

You may find yourself shocked and entertained by several revelations in The Black Prism and if you do enjoy those, believe me when I say that the first book was just a glimpse of Weeks’ talent as a great storyteller. Lightbringer is, in my opinion, one of the most well-plotted series I’ve ever read; I can’t think of many series that constantly made me skip my heartbeat. This is high-level plot crafting, I didn’t realize how many hints and subtleties for the big revelations in the next installments were embedded already in this book. Plus, the main characters introduced in The Black Prism were characters that never stops developing throughout the whole series; in both journey and mentality. Gavin Guile, Kip, Karris, Ironfist, and Liv—whether you love or hate them is a different story—were well-realized characters that I found to be compelling and entertaining to read.

Let’s take two of the main characters, Gavin Guile and Kip, as an example. Gavin can be considered as Gary Stu; he’s the Prism—the most powerful man in the world. Plus, he’s also full of wit and charm that makes everyone heads over heels for him. But the rules of the world applied don’t make him an immortal being; every Prism has a limit to their lifespan, he’s also not safe from weaknesses and he does make mistakes. On the opposite spectrum, we have Kip, a fat teenager who constantly self-loathe and self-bash his own weight. I know that many readers have voiced their complaints about Kip’s self-loathing behavior and dirty thoughts, but I personally think that Weeks’ captured the personality of a teenager going through puberty quite spot-on through him; Kip’s upbringing and the way he was treated also influenced his present behaviors greatly. I loved how each of the characters’ past in the book matters to their developments; the juxtaposition in the interaction between the characters and the way their relationships developed and influenced by their past and current circumstances were superbly done.

“You might want to think twice before you try to use a man’s conscience against him. It may turn out he doesn’t have one.”

The methodically structured momentum building eventually leads to a glorious well-written battle sequence that concludes the first book in the Lightbringer series delightfully. With engaging politics, great characterizations, immersive world-building, and a colorful magic system full of consequence and rules reminiscent of Sanderson’s Warbreaker in both intricacies and qualities; The Black Prism signified the start of a heart-pounding high fantasy series to remember. I plan to spend the next WEEKS of OctoBRENT rereading this series, so I’ll be jumping into The Blinding Knife immediately.