O’gentlefriend, Nevernight was incredible. Allow me to join The Droogs from now on.

The Nevernight Chronicle is not a series I’ve never heard of. If you’re active on Book Twitter, Bookstagram, or Booktube, you’ll most likely have seen or heard of this series. How could you not? The fans are very loud and devoted; aesthetically, both US & UK editions of this series look gorgeous as fuck; the content? Let’s just say that the beautiful cover artworks really did the content justice and vice versa. To Emily Fox and Emma, thank you for recommending this book to me. I can’t believe I almost missed such an awesome book just because the series has been falsely labeled as a book/series specifically for YA audience. Now, there’s nothing wrong with YA—this isn’t me judging the quality of YA books—but it feels wrong to immediately label Nevernight or any book as a book targeted for YA audience just because the main character is young; 16 years old in this case. In my opinion, Nevernight sits comfortably in the hybrid stage between YA and adult fantasy; a novel that can be read and enjoyed by both YA & adult SFF reader, just like Mistborn trilogy by Brandon Sanderson or Red Rising Saga (just the first three books) by Pierce Brown. So yes, don’t let the occasional mislabeling of this series put you off from giving the series a go.

“Too many books. Too few centuries.”

Nevernight is the first book out of three in The Nevernight Chronicle by Jay Kristoff. The story begins with an unnamed narrator telling the readers that they’re going to recount the details behind the tale surrounding the main heroines of the series—Mia Corvere—and from there on we immediately follow Mia’s perspective. There are two timeframes in the narrative, the past where Mia was ten years old; another where Mia is a sixteen years old girl determined to join The Red Church—a school of assassins—to perfect her assassination skills in order to seek vengeance against the people who destroyed her life and family in the past. At its core, Nevernight is a revenge story that utilized a battle-school trope, which is also one of my favorite tropes in SFF. Comparison-wise, I’ll say that if you’ve read and loved Red Sister by Mark Lawrence, you MUST give this book a read. I would describe Nevernight as Red Sister taking place in a setting that’s reminiscent to The Lies of Locke Lamora by Scott Lynch. Revenge, love, and friendship are the three main themes of the novel. Although the plotline may not be the most original one out there, Kristoff’s execution of this dark tale was brilliant.

“The books we love, they love us back. And just as we mark our places in the pages, those pages leave their marks on us. I can see it in you, sure as I see it in me. You’re a daughter of the words. A girl with a story to tell.”

How could I not love Mia? She loves solving Puzzle and perusing books, and she also genuinely cares about her loved ones. I’ve mentioned before that Nevernight reminded me of Red Sister. A huge part of this is that I found Mia to be similar to the main heroine of that series: Nona Grey. Both of them are young female main characters learning in a battle-school of assassins; both of them have a similar trait that cares about their friends intensely. I loved seeing Mia’s character development as she learned the true meaning of friendship and love during her deadly lessons in The Red Church. For those of you who don’t know, Mia also has an everlasting companion, Mister Kindly. Mister Kindly is a Daemon in the form of a cat, a devourer of fear that accompanied and helped Mia. Let me repeat that, a shadow cat that devours fear. How can you resist reading this book knowing that Mister Kindly exist!? 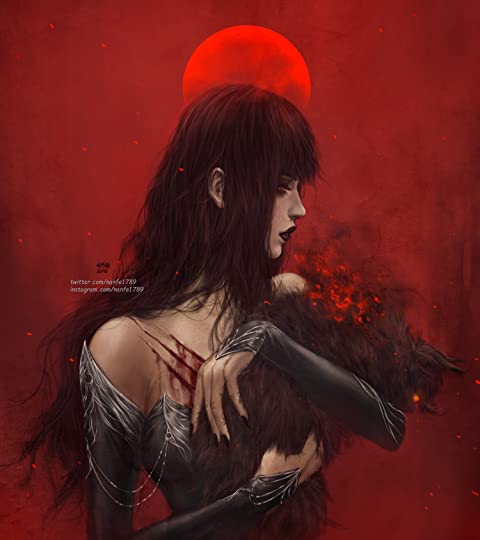 The world-building in Nevernight isn’t as massive/complex as many adult fantasy series I’ve read. This, however, doesn’t mean that the world-building was poorly done. Three suns that almost never sets, a city built out of the bones of dead giants, families with a long history, and an efficiently told lore that wormed its way into the narrative made The Republic of Itreya filled with a vivid and atmospheric quality. Similar to Camorr from The Lies of Locke Lamora, Itreya reminded me of a fantasy-esque version of Venice. Kristoff incorporated the lore and history of the world effectively into the dark magic and engaging action scenes of the book while leaving questions to be answered in the sequel.

“The brighter the light, the deeper the shadow.”

Also, I personally think there’s an over-exaggeration over Kristoff’s prose being purplish. Yes, reading is very subjective and his prose won’t be a hit for everyone; no prose ever will. However, the constant screaming I’ve heard about the prose being super purple seemed to imply that reading it will turn the reader into a purple Hulk. I’ll admit that there were a few phrases that I failed to connect with but nothing that major that would end up ruining my enjoyment of the book. Admittedly, one detailed sex scene in this book didn’t work for me, not because it’s not well-written, but it was too long, no pun intended. Thankfully, romance and the sex scenes never took over the story. Generally, I also don’t enjoy reading footnotes, but the footnotes featured in Nevernight provided humorous commentaries and great insights into the world-building that I can’t help but enjoyed reading. Kristoff’s writing and storytelling style were delightful to read; they’re engaging, fun, atmospheric, and beautifully written.

“Beauty you’re born with, but brains you earn.”

I’ve noticed that there’s a strong feeling that comes with reading Nevernight; it’s either hate it or love it, there’s no in-between. I can finally understand why and fortunately, I’m in the latter. Revenge plot executed wonderfully, filled with empathizing characters and blood-soaked action scenes told in a beautifully dark and enchanting manner; Nevernight is a bloody enthralling start to a trilogy that I enjoyed reading immensely. I’ll be diving into Godsgrave right away. If you haven’t started this series, now is a good time to embark upon this adventure, especially because the third and last book of the trilogy comes out in a few days. The scarlet maestro of assassination has plenty of songs to sing, and you shall never flinch, never forgive, and never forget it.