Seriously, The Forgetting Moon was awesome already, but The Blackest Heart triumphed over its predecessor in every possible way. I don’t even have words to express how grateful I am that the author sent me these two books, which weren’t even on my radar, to review; it’s truly serendipitous that I found a new ongoing favorite series because of it.

Picture: My signed copy of The Blackest Heart! 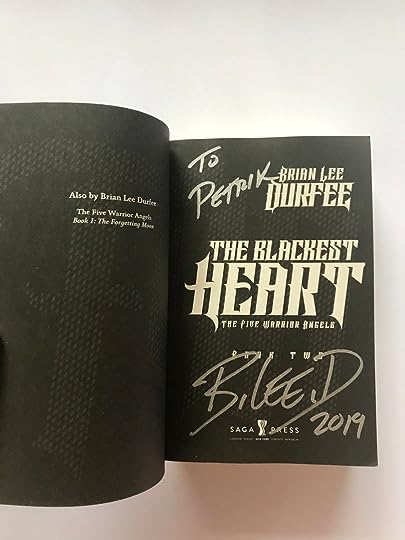 The Blackest Heart is the second book in The Five Warrior Angels series by Brian Lee Durfee. Taking place two weeks after the end of The Forgetting Moon, the identities of the five warrior angels have been fully revealed. Or have they? If you think the prophecies trope will only give away the main story, you better reconsider that notion immediately. Unpredictability was actually one of the strongest factors of the plot; what I thought was going to be simple ended up becoming more complex due to insane text manipulation and deception. Upon finishing this book, I honestly have no idea who or which prophecies to believe. Durfee deftly implemented how brutal, complex, and dangerous the differences in faith and religion can be. The result? 960 pages of glorious epic fantasy.

‘“With their faith in confliction religions, humans will someday prey upon themselves, ravish and tear and eat one another alive, like uncontrollable beasts of the underworld.”—The Book of the Betrayer’

The first book took its time with providing the necessary groundwork for the series. Although I loved and consider The Forgetting Moon one of the strongest first installments to an epic fantasy series I’ve come across, there were admittedly a few moments in it where the pacing felt a bit too slow; that’s not the case with The Blackest Heart. In this massive sequel, I was so completely addicted, hooked, and captivated by every single character’s POV that taking a break from reading it became a challenge. Durfee has put the pedal to the metal regarding every single factor to create an outstanding sequel that grew in complexities, tensions, and characterizations. One of the methods that Durfee used to achieve this stunning improvement was by including a new perilous quest undertaken by the Company of Nine, an obvious nod to The Fellowship of the Rings that put a smile upon my face. No need to worry about it being a copycat, the Company of Nine and their quest were more of a great tribute to quest based fantasy; Durfee has input more than enough originality to make this specific quest his own unique take on it.

It wasn’t only the story and world that grew larger in scope. The number of characters in the series received the same treatment; there were around 130 character names in the glossary. However, don’t be intimidated by this fact, because Durfee has done a spectacular job of making sure that they were easy to remember by focusing the storytelling on several central characters rather than every single character. The learning curve of this series isn’t like reading Malazan Book of the Fallen; if you’re good with A Song of Ice and Fire you should be good with this series. The characterizations were simply fantastic. The majority of each character’s development was unpredictable. Let’s take one of the side character, Liz Hen, as an example. I despised Liz Hen so much in The Forgetting Moon and the first half of The Blackest Heart; little did I know that Durfee’s talent for characterizations would shine through the most through her character development, and she doesn’t even have a POV chapter. Then there’s Beer Mug, another amazing character who didn’t even have any dialogue because he’s a loyal dog, but my god, the things he did in the name of loyalty and friendship should earn him the treats of gods. Also, excluding new POV chapters, Gault and the Bronachell’s POV received the most improvement.

Because of the terrific characterizations, the brutality and struggles the characters faced became palpable. I feel like it’s getting rarer for me to find an author that tortures their characters this much. The pain and wounds inflicted upon them were written extremely well; the groundwork laid for them in the first book totally worked. I feel like I’ve come to know them as ‘real’ people and beings, and I felt their pain, sadness, fury, and fear. Although I wouldn’t categorize this series as grimdark, the characters do retain their morally grey traits and the story did go in darker directions in this novel; there were close to zero moments of happiness or solace to be found here. Sure, there was some comic relief situations that made me laugh, and the friendship formed between the Company of Nine was heartwarming, but that’s pretty much it. That being said, the morally grey characters were able to light the flame of my empathy and I honestly believe that Durfee has spectacularly struck a fine balance between heroic and grimdark fantasy with The Blackest Heart.

‘”The Triumphant hero of any story should be neither wholly good nor wholly innocent, but should be full of both strength and weakness, righteousness and sin, truth and guilt, for contradictions are most interesting in the human soul.”—The Chivalric Illumination of Raijael’

The action scenes were also improved as the violent and macabre battles have increased in magnitude. The quest that the Company of Nine embarked upon was brutally perilous, the conflict caused by blind beliefs of different faiths was devastating, and the large-scale war that occurred near the end of the book was exhilarating and imaginative in every sense of the word; there’s always a bigger fish that colored the azure sea scarlet. As if I was watching a cinematic dance of death, the harsh wounds inflicted—both physically and mentally—to the bloodstained warriors and victimized innocents due to the terror of war were empathizing and brimming with intensity. Durfee unsheathed the blades of chaos to cut the angelic wings of peace through the continuation of Sør Sevier’s ravaging invasion; the multiple factions’ deadly race to attain the divine weapons became another factor that enhanced the action sequences. Reading about a war that caused colossal casualties being waged in the name of religions resonated with me; seeing the well-written characters fight against each other with grim determination to uphold what they think is right, or maybe just for the sake of survival, made for an enthralling reading experience.

‘Strip faith from the most faithful, belief from the heartless believer, and what are you left with? The angriest and most dangerous of enemies.”—The Angel Stone Codex’

Contrary to some reader’s apprehensions regarding prophecies—they say it made the story easy to guess—in fantasy these days, I found that the multiple prophecies and visions in this series heightened the unpredictability as not everything is what they seem to be. Which one are truth and justice? Which one is lies and betrayal? Which of the prophecies are real? Who, indeed, are the ‘real’ Five Warrior Angels returned? Full of surprises, revelations, and unpredictability, this is an epic fantasy with a prophecy trope done right. Plus, I loved Durfee’s prose. His writings were remarkably vivid, immersive, and flowed really well. Every page left an atmospheric trail that automatically engraved the passing scenes into my memory.

‘“Thus, my greatest fear cometh that the writings of the Last Warrior Angels will eclipse the word-of-mouth stories. Indeed, they will eclipse the ancient symbols once scratched into standing stones, totems, and altars. Words on a scrolled parchment carry import. Words on a page within a bound book carry the weight of a world.”—The Angel Stone Codex’

The distribution of talent was spread equally into factors of importance that tightened and amplified the quality of the novel and series itself; with a savage burst of brilliance in every word, I’m astonished by Durfee’s imagination and its vivid translation to the pages of this tome. The Blackest Heart won my utmost admiration. Durfee has created a majestic sequel that exhibited his gleaming crystallization of pure storytelling skill. The Blackest Heart will definitely be included in my annual Best Books of the Year list; it deserves a crowning achievement for character-driven epic fantasy. The Five Warrior Angels has now been stamped with permanent ink into my list of favorite ongoing series, and it has all the strength to stand tall among other critically acclaimed epic fantasy series. I sincerely hope epic fantasy readers will give this series a go because right now it’s criminally underrated. I have no idea how Durfee will top this book and I wait for the arrival of the next book, The Lonesome Crown, with inhuman anticipation.

One thought on “The Blackest Heart (The Five Warrior Angels, #2)”