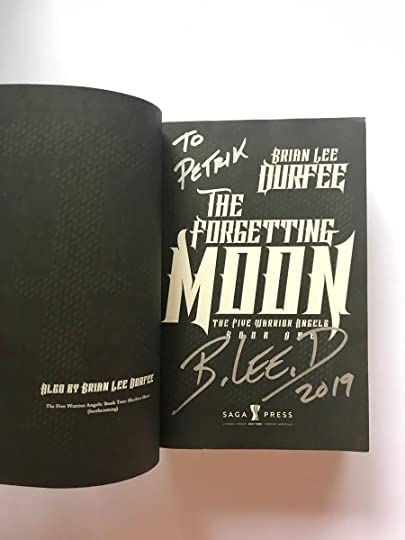 Throughout the majority of The Forgetting Moon, the story takes place in Gul Kana, the last unconquered kingdom in the Five Isles, which is on the brink of an invasion. The Angel Prince of Sør Sevier, Aeros Raijael, is coming for worldwide domination. This is an epic fantasy with identity, war, valor, destiny, and faith as the main themes; I will recommend this tome only to readers who love the epic fantasy genre heavily. Like many other epic fantasy books I’ve read and loved, The Forgetting Moon is in my opinion a mostly foundational book. The main purpose of this debut is to have a firm groundwork for the author to work with in future installments and Durfee did this exceptionally. In this first installment, Durfee has established the characters’ background, personalities, and motivations. The world-building was also intricately crafted. I don’t want to spoil anything important here, so I’ll just mention that if you love Malice by John Gwynne or The Ember Blade by Chris Wooding, with a touch of A Game of Thrones (I’m not saying these names lightly here) by George R. R. Martin as I did, this could be a huge contender to become your new favorite.

‘“In this embattled world, man held faith in invisible forces and hostile spirits, oftimes doing the bidding of the wraiths that fed in his soul. To appease the winged demons who ruled with fiery death, man erected altars of sacrifice. It was a time of selective loyalties, a time of great betrayal. A time of celestial divinations that one holy and pure and strong of mind would be born by the sea, blessed with the Mark of the Cross.”—The Moon Scrolls of Mia’

The Forgetting Moon used plenty of well-known tropes in fantasy, written with a modern voice. One of the most dominant tropes utilized here is the element of prophecy. I personally never mind prophecy in my epic fantasy reads; I tend to find them comfortable and I love the anticipation of seeing whether the prophecies will be fulfilled, proven wrong, or were non-existent to begin with. The unpredictability that can be offered from this plot device can be powerful. Well-executed tropes are comfortable to read, and Durfee delivers. Who were the Five Warrior Angels? Who are their descendants? Why are they so important to the present timeline? These questions will be mostly answered within this book but at the same time, Durfee still left a lot of storylines to look forward to in the sequels.

Something important to know about this book is that it’s a heavily character-driven story; the characters and their characterizations will definitely be the make or break factor for readers. This is a big book with an even bigger sequel, and if you don’t care about the characters the book or series probably won’t work for you. I will also admit that there were a few moments where the pacing did slow down too much but luckily for me, I enjoyed loving and hating the characters that they canceled this minor issue with the book. Durfee has a great talent for making sure his characters’ personalities, feelings, and behaviors are conveyed properly. All the main characters were engaging to read, and Nail in particular was my favorite POV to read. Jon Snow of A Song of Ice and Fire, Rand al’Thor from The Wheel of Time; in epic fantasy, bastards or adopted children that proceed to do incredible and legendary deeds are not something rare but they’re something I never get tired of. In the midst of struggling with identity and the pain of growing up as either of these, I love seeing how these characters shaped the injustice and misfortune of their birth and upbringing into their strength. That’s one of the many reasons why I felt Nail’s story to be the strongest out of all the POVs. However, this doesn’t mean that the spotlight belongs exclusively to Nail and characters with POVs. Through the perspectives of the main characters, we get to see the side characters being remarkably developed and I really can’t wait to read more of their story. It’s simply incredible how Durfee connected the plot thread between all these characters from different Isles and factions.

Durfee’s prose was easy to read but never too simple; it had this vivid quality that I loved reading. To me, the arrangements of words he chose felt ‘right’ to read and it’s shown brilliantly through the characterizations, world-building, and the tension-packed action scenes. Excluding the invasion, most of the vivid battle scenes in this installment were displayed in duels or skirmishes rather than a large-scale war and they were done magnificently. Durfee might be leaving large-scale battles for future installments and I look forward to reading them.

’“In life, as in war, more is lost when hope dies, than by a cold steel and slaughter.”—The Chivalric Illuminations of Raijael’

The world-building of this book was extraordinary and important. I mean it, the world-building played a huge part in influencing the story and characters. The epigraph at the beginning of each chapter, which was comprised of an excerpt from Five Tomes of Ancient Writings, boosted the already rich world-building wonderfully. Revelations, lies, and in-depth lore; Durfee really knows and understands what he’s doing with his series. Every moment of reading the lore, the environment, and the history of the Five Isles transported me easily into the book. I also thought it was charming how the number ‘5’ became an important number for the series. Five Isles, Five Divine Weapons of Laijon, Five Angel Stones, Five Tomes of Ancient Writings, fifty-five chapters, and planned five installments in a series called The Five Warrior Angels. In fact, The Forgetting Moon is actually the name of the first divine Weapon of Laijon, the other four being The Blackest Heart (a crossbow and the title of the second book), Lonesome Crown (a Helm and the title of the third book), Ethic Shroud (a shield and the title of the fourth book), and finally Afflicted Fire (a sword and the title of the fifth and maybe last book of the series).

‘”On the eventide of their escape from the slave pits, the Five Warrior Angels gathered in a grove, their hearts open to glory. Angels descended in their midst, bearing five stones and five mighty gifts: a red stone and a sword for the Princess, a white stone and a pearl-colored shield for the Thief, a black stone and a black crossbow for the Assassin, a green stone and a war helm for the Gladiator, and lastly, a blue stone and a battle-ax for the King of Slaves.” –The Way and Truth of Laijon’

I think one of the main reasons why so few readers have given this book a chance is that they feel—understandably—intimidated by it. I get it, readers can be reluctant or intimidated to give a 763 pages debut written by an unknown author a try; replace the author’s name with the heavy hitters like Martin, Tolkien, or Sanderson, and I bet readers will be singing praises for this book’s size. I’m here to tell you that if you love epic fantasy with a prophecy trope done absolutely right, give this a go, simple as that. Mixing classic fantasy and modern fantasy seamlessly, The Forgetting Moon is an immensely engrossing epic fantasy debut. It’s an absolutely dazzling start to an immersive and large-scale epic fantasy series; totally worth every damn second to read and I’ll be diving into the sequel, The Blackest Heart, immediately.